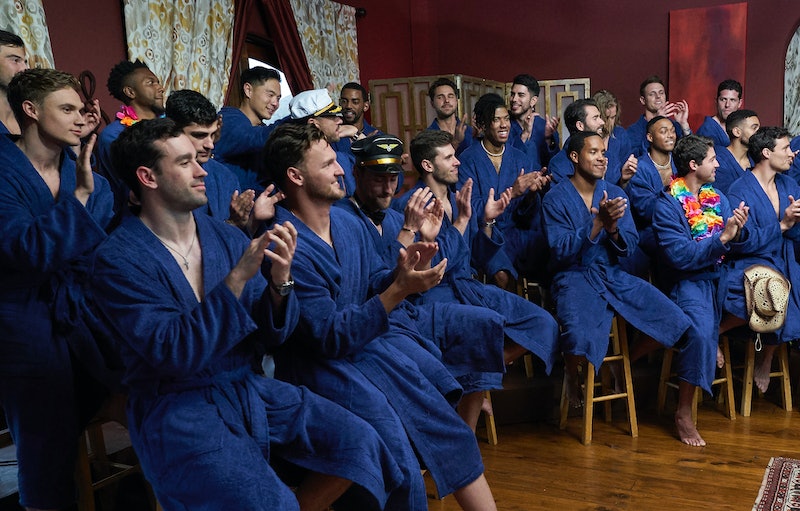 When you were in elementary school, did your desk have a little placard with your name on it so other students and your teacher could get to know you, especially during those busy first few weeks of school? Yeah, maybe it’s time for The Bachelorette and The Bachelor to follow suit.

During Gabby Windey and Rachel Recchia’s Bachelorette season so far (or any of the Bachelor/ette seasons), it can be hard to memorize all of the suitors’ names. Contestant John Anderson mixed up Gabby and Rachel’s names upon first meeting the Bachelorettes, but trying not to mix up the 32 men who started the season? Nearly impossible, as many viewers have pointed out.

“Producers. I am begging you to put every man’s name on the screen when their face is on tv through at least week 4,” wrote user @avaree10946285 in a July 18 tweet, as Week 2 was airing. Yes, the show does supply helpful (and sometimes hilarious) chyrons with contestants’ name, age, job, and hometown. Who could forget James Clarke, whose occupation was listed as simply “Meatball Enthusiast” — or even Chris Austin, simply known as “Tone Deaf” in Episode 2 after showcasing his singing abilities during the pageant.

However, the label usually disappears during the later part of a confessional scene — and doesn’t typically appear outside of those interviews, leaving viewers to lose track of contestants in a Bachelor/ette blur. Fortunately, the show might just be on board with the proposed change — at least, if franchise creator Mike Fleiss has anything to do with it. “Good idea!!!” Fleiss responded, signaling his brief support for the issue. Fleiss also liked an earlier tweet from @TheBachBabes raising a similar question. “How are ya’ll calling these guys by name already,” the user wrote. “They’ll be shirtless dude, chick guy, and headphone man for at least the next 3 weeks for me.”

The naming issue isn’t new — and several viewers have been tweeting their confusion since the start of Gabby and Rachel’s Bachelorette season.

User @popstarsley had another genius idea — in addition to showing their names, show a picture-in-picture of their limo arrival, too!

Because you might momentarily forget Alec Garza’s name, for example — but there’s no way you’re forgetting the guy who made children serenade Gabby and Rachel with a hate song about their ex, Clayton Echard.