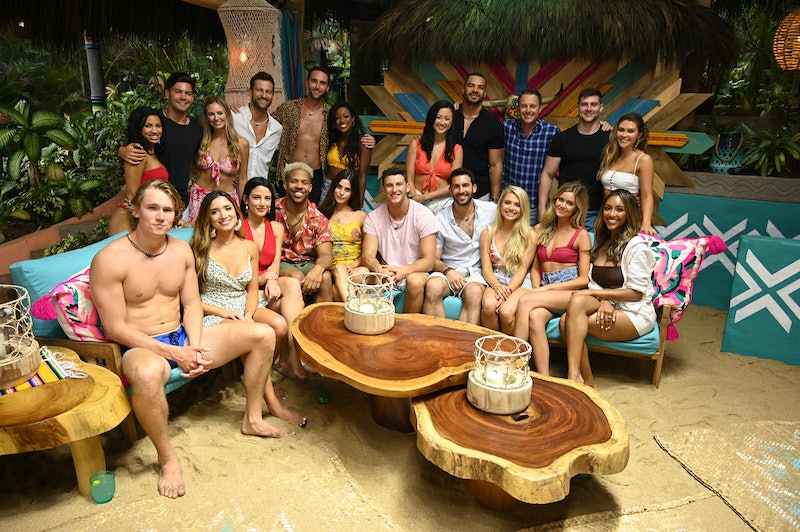 Potential spoilers ahead for Season 7 of Bachelor In Paradise. If there’s one thing Bachelor/ette fans are good at, it’s research. It was, after all, the viewers who dug up Garrett Yrigoyen’s problematic Instagram likes during Becca Kufrin’s Bachelorette season, and Rachael Kirkconnell’s racist history during Matt James’ season of The Bachelor. If there are secrets to be uncovered, you can bet Bachelor/ette fans will find them.

They don’t always use their investigative prowess to expose controversies, though; often, their time is dedicated to sleuthing for spoilers about whichever Bachelor franchise is next set to air. In this case, that’s Bachelor In Paradise Season 7, which recently wrapped filming and is slated to premiere on Aug. 16. Here are some of the biggest theories about the show floating around Reddit so far.

The Bachelor In Paradise Season 7 Hosts

After hosting the Bachelor franchises for nearly 20 years, Chris Harrison was fired from ABC in June following a controversial interview with former Bachelorette Rachel Lindsay in which he defended Rachael Kirkconnell’s past racist actions. Former Bachelorettes Tayshia Adams and Kaitlyn Bristowe stepped into fill his place for Katie Thurston’s season of The Bachelorette, but Bachelor in Paradise will be hosted by a rotating group of celebrities. David Spade, Titus Burgess, Lance Bass, and Lil Jon are all confirmed to appear, while other rumors suggest that the show’s bartender and former Bachelorette contestant Wells Adams could be added to the roster. Bachelor Nation couple Jared Haibon and Ashley Iaconetti have also been suggested as possible hosts after Ashley stated vaguely on Instagram that she and Jared would be busy for a month due to a job opportunity. Lastly, Billy Eichner seemed to hint he too might pop in Paradise, as he posted a recent Instagram photo of him in a full suit captioned “Ready for the beach!” It could have just been an ironic caption, but Eichner does have a little history with the show: he shared one of more retrospectively awkward moments on the entire franchise with then-lead Colton Underwood while hosting a Bachelor group date.

The Bachelor In Paradise Season 7 Cast

There may not be much need to theorize about the cast of the upcoming season because it appears fans may have gotten their hands on a leaked cast list, which I won’t spoil but that you can read here if you feel so inclined. Without giving too much away, Paradise participants will include an even mix of Matt’s contestants, Peter Weber’s contestants, and Tayshia and Clare Crawley’s contestants. Some names from Katie’s season also appear on the list, and there are a few old alums who will be returning to the beach as well.

There have been some publicly confirmed additions to Season 7 too, like the beloved Dr. Joe Park from Tayshia/Clare’s season. And there are some more speculative guesses as to who will be there, like Chelsea Vaughn from Matt’s season, who posted an Instagram picture of herself in a swimsuit with the caption, “Did someone say Paradise?” in March.

Katie herself hinted that Thomas Jacobs — who she recently eliminated from her season in one of the most ruthless and iconic send-offs in franchise history — could be heading to Mexico as well. “I’m sure he’ll be just fine,” she tweeted after she sent Thomas home, followed by some beach-themed emojis.

Finally, fans believe Abigail Heringer from Matt’s season will be on Paradise and couple up with Noah Erb from Tayshia’s season — but take it with a grain of salt, because the sourcing comes from an overheard conversation on a New York City sidewalk in which Abigail supposedly used the words “Noah” and “my man” in the same sentence.

The Bachelor In Paradise Season 7 Couples

The Bachelor In Paradise Season 7 Drama

There’s always something! Firstly, one contestant who’s expected to appear on Paradise who I’ll describe only as a blonde woman from Peter’s season allegedly isn’t there for the right reasons: it’s been rumored that she went on the show despite having a partner back home. There are also reports that a lot of former Bachelor contestants were apprehensive about appearing on Paradise, given the franchise’s mass racial reckoning during Matt’s season, but ABC clearly persuaded at least some people to head to the beach. See it all unfold when Bachelor in Paradise premieres on Aug. 16.