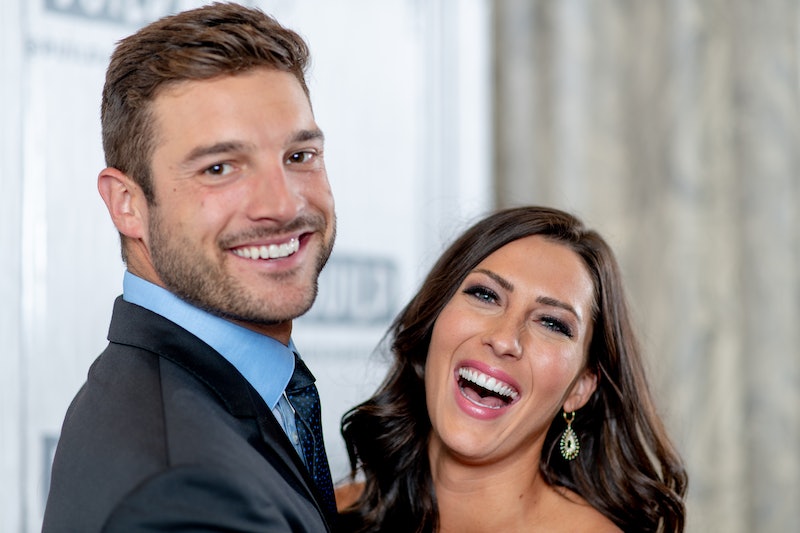 Two years after her Bachelorette season ended with a romantic proposal, Becca K. is single once again. On the Bachelor Happy Hour podcast —which she co-hosts with Rachel Lindsay — Becca Kufrin confirmed that she and Garrett Yrigoyen have ended their engagement, after months of speculation that the couple had called it quits. The former publicist shared the news on the August 31 episode of the podcast she co-hosts with Rachel Lindsay, in an emotional segment that she recorded alone because "didn’t think it was fitting to bring anyone else into this conversation" when the relationship in question was between two people.

"I don’t think it’s going to come as a shock to anyone, but Garrett and I have decided to end our engagement," Becca said. While she declined to "divulge details" about what led to the split, the former Bachelorette did reference Garrett's controversial social media presence, including a June Instagram post, where he shared support for police and the "Thin Blue Line" in the aftermath of George Floyd's death. "Garrett and I came to this decision after many conversations. It wasn’t just something we just arrived at one night," she explained.

"It wasn’t based solely off of one Instagram post or somebody else’s opinions or comments. There's much more to it. To any relationship, there’s a lot of layers," she said, adding, "it’s no one’s business other than what I’m telling you right now." Becca explained that after spending some time apart, the pair ultimately "came to terms" with the fact that they wanted different things. "We realized that we still have so much love and kindness and compassion in our hearts for the other person, but sometimes people’s paths just go different ways," she said.

Despite deciding to call it quits, Becca explained that she has no regrets about her relationship with Garrett, and will treasure the "countless memories" that they made together, both on The Bachelorette and in the years afterwards. "We went on this crazy TV show over two years ago in hopes of finding love, and we were lucky enough that we did," she said. "We really, truly did. I’m so grateful for that opportunity and to have had the two-plus years with Garrett. Like I said, I still have so much love and compassion in my heart for him. ... I will always look back at this time in my life with so much gratitude and love."

Since their engagement in 2018, Becca and Garrett have dealt with quite a few controversies. When her season of The Bachelorette was first airing, fans discovered that Garrett had liked homophobic, transphobic and racist social media posts on Instagram. He subsequently apologized for his social media activity and wiped his account, and Becca stood by him throughout the controversy. "People say and do certain things. I've done things in the past that I'm sure it wasn't the best thing," she told Entertainment Tonight at the time. "I can't fault anyone for what they believe, and who's to say that anything that anyone likes [online] is truly what they believe."

However, on June 9, 2020, Becca found herself defending her fiancé and their relationship once more after he received backlash from fans and fellow Bachelor alums for his Instagram post supporting the "Thin Blue Line" — which is associated with the Blue Lives Matter movement — amid nationwide protests against police brutality. "Garrett is my fiancé and I love him and to his core, I believe that he is a good person. What he posted … I don’t align with and I don’t agree with," Becca said on an episode of Bachelor Happy Hour. "I'm trying to get him to see the bigger picture."

A week later, though, she admitted that the entire situation was forcing her to reconsider her relationship with Garrett. "For those who are curious about my relationship with Garrett at this point, all I can say right now is I don’t know," Becca said at the time. "It’s something that we are trying to work through and discuss and do work on at home at this time and that’s where the work will remain."