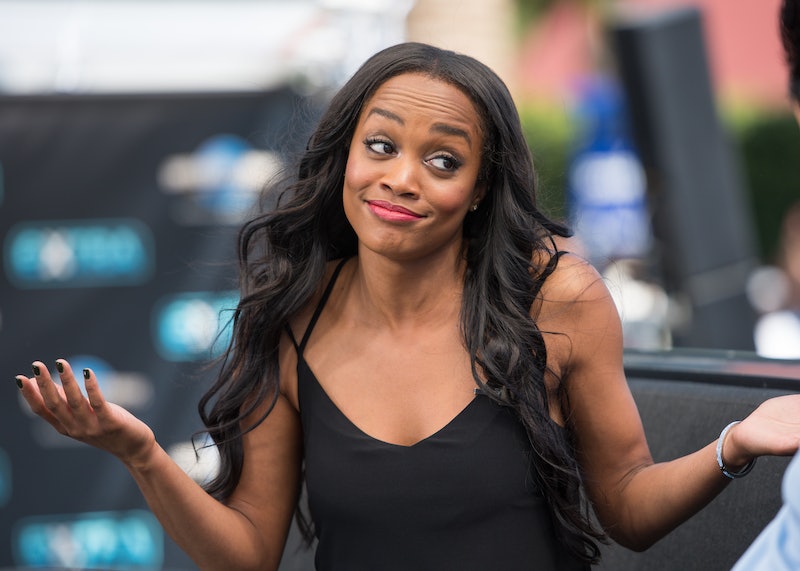 Rachel Lindsay isn't holding back when it comes to sharing her feelings about a fellow Bachelor alum. During a recent appearance on Danny Pellegrino's Everything Iconic podcast, Rachel Lindsay called Garrett Yrigoyen a "piece of sh*t" for his "problematic" views. The former Bachelorette opened up on the July 29 episode of the Bravo-themed podcast about the backlash that Garrett earned after sharing an Instagram post supporting the "Thin Blue Line" and police officers during the Black Lives Matter movement and protests against police brutality. And, while she didn't go so far as to give an update on Garrett's relationship status with fiancée Becca Kufrin, Rachel did admit that Becca knows exactly where she stands.

"I think he's a piece of sh*t, and I have said to her, 'I will not f*ck with him," Rachel said on the podcast. "He has doubled down on his beliefs. This is not the first time he has had problematic behavior," she added, referencing his history of liking racist, misogynistic, transphobic and offensive posts on Instagram. "When he was on [Becca's] season — he had a history of liking things that were racist, sexist, homophobic, calling the Parkland students ‘child actors.' It was a lot so this is who this man is. And he's a piece of sh*t to me," she continued Garrett apologized for his social media presence back in 2018, when Becca's season of The Bachelorette was airing, though he appears to have since deleted that post.

Rachel's comments come amid speculation that Becca and Garrett have decided to end their engagement due to their differing values and beliefs. On June 9, Becca defended her fiancé during a conversation with Rachel about the Black Lives Matter movement on Bachelor Happy Hour. "Garrett is my fiancé and I love him and to his core, I believe that he is a good person. What he posted … I don’t align with and I don’t agree with," Becca — who supported the BLM movement and protests on social media — explained. "I don’t think he meant it in a malicious way. I do think it was tone deaf and it was the wrong time and message and sentiment. … I’m trying to get him to see the bigger picture."

Shortly after that episode of the podcast went live, Becca reflected on the backlash and the way she's decided to handle it on Instagram. "I value my friendship with Rachel. I also value my partnership with Garrett. So this is really effing hard. As it should be," she wrote, before apologizing for not handling the situation as well as she could have. "Each day brings on a brand new challenge, conversation, & new lesson. I welcome them & I hope you do too. If I’ve learned anything throughout these past 2 years, it’s that we have the beautiful capability to be better than the day before, so that’s what I’m trying my damndest at."

A week later, she admitted that the entire situation was making question her future with Garrett in another episode of the podcast. "For those who are curious about my relationship with Garrett at this point, all I can say right now is I don’t know,” Becca revealed at the time.

She continued, "I can’t give anything more than that. It’s something that we are trying to work through and discuss and do work on at home at this time and that’s where the work will remain and that’s really the best can give you at this point." Becca defended her relationship with Garrett as recently as July 20, although the couple have been spending time in different states over the past month; thus far neither she nor Garrett have publicly reacted to Rachel's comments.