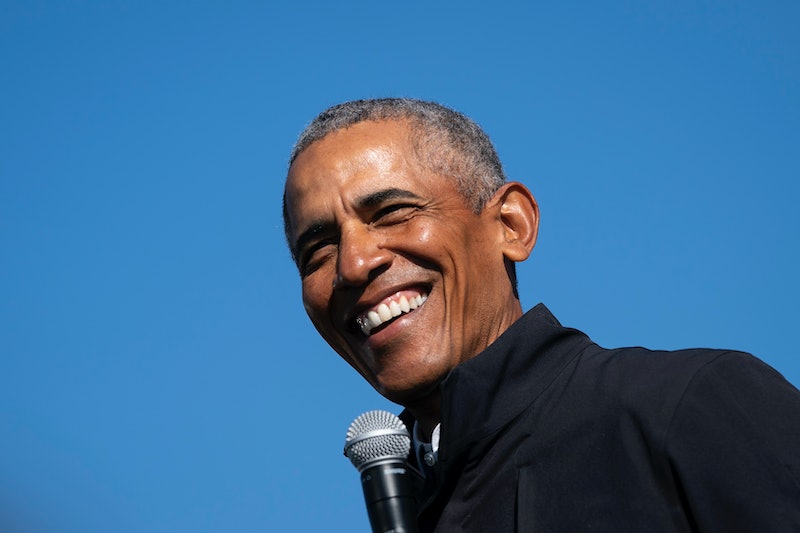 A decade after offering himself up for the role, Drake got Barack Obama's "stamp of approval" to play him in an inevitable future biopic. The former president was asked about the hypothetical casting in a recent interview with Complex's Speedy Morman, and his answer should give the rapper quite a bit of hope. Not only is Obama OK with the possibility, he believes his family would be, too.

"I will say this, Drake seems to be able to do anything he wants," the former president said. "I mean, that is a talented, talented brother. And, so if the time comes and he’s ready…"

After Morman hammered the point home, asking Obama flat-out if Drake has his blessing, the 44th POTUS predicted he'd actually have more than one affirmative vote in his family. "Drake has, more importantly, I think, my household’s stamp of approval. I suspect Malia and Sasha would be just fine with it," Obama joked of his daughters, now 22 and 19 years old, respectively.

Drake, who played Degrassi: The Next Generation's Jimmy Brooks in the early 2000s, first got the ball rolling during a 2010 interview with Paper. "I hope somebody makes a movie about Obama's life soon because I could play him. I watch all the addresses. Anytime I see him on TV, I don’t change the channel, I definitely pay attention and listen to the inflections of his voice," the four-time Grammy winner said at the time. "If you ask anyone who knows me, I’m pretty good at impressions. Slowly but surely, I’m not in the study mode because nobody’s called me about anything, but I just pay attention so when the day comes I’m not scrambling to learn how to speak like him."

This isn't the first time the two have publicly discussed each other, either. In January 2016, Obama had Drake in his feelings when he proclaimed Kendrick Lamar could beat him in a rap battle. "Gotta go with Kendrick," Obama told YouTuber Adande Thorne (aka sWooZie). "I think Drake is an outstanding entertainer, Kendrick… his lyrics, his last album, was outstanding. Best album, I think, of last year."

Later that month, Drake dropped "Summer Sixteen," which included the lyric, "To do what you couldn't do / Tell Obama that my verses are just like the whips that he in / They bulletproof..." While it's unclear what POTUS thought of the track, he appeared to be a fan of "Hotline Bling," the lead single off of Drake's multi-platinum, Grammy-nominated 2016 album, Views. In October 2016, Usher posted a video of Obama dancing to Drake's single at the after-party for the White House's Love and Happiness concert event.

Then, after Obama gave his farewell presidential address prior to leaving office in 2017, Drake shared a viral meme of his signature facial hair and fade Photoshopped onto the A Promised Land author. "As a Canadian that calls America home for part of the year I will always carry your words and the memory of your time in office with me as inspiration," the rapper captioned the post. "Big up yaself O."

With Obama's approval finally granted, it may be time for filmmakers to make Drake's hotline bling with a casting offer.

More like this
The 'Love, Lizzo' Harry Styles Scene Is Just 1 Moment That Made Fans Feel Seen
By Brad Witter
Olivia Wilde & Harry Styles Are Reportedly "Taking A Break" After Almost 2 Years
By Jake Viswanath and Radhika Menon
Britney Spears Celebrated Her Birthday With Loving Messages To Jamie Lynn & Her Sons
By Brad Witter
The Britney Spears Disney Princess Musical Is Finally Opening On Broadway
By Jake Viswanath
Get Even More From Bustle — Sign Up For The Newsletter