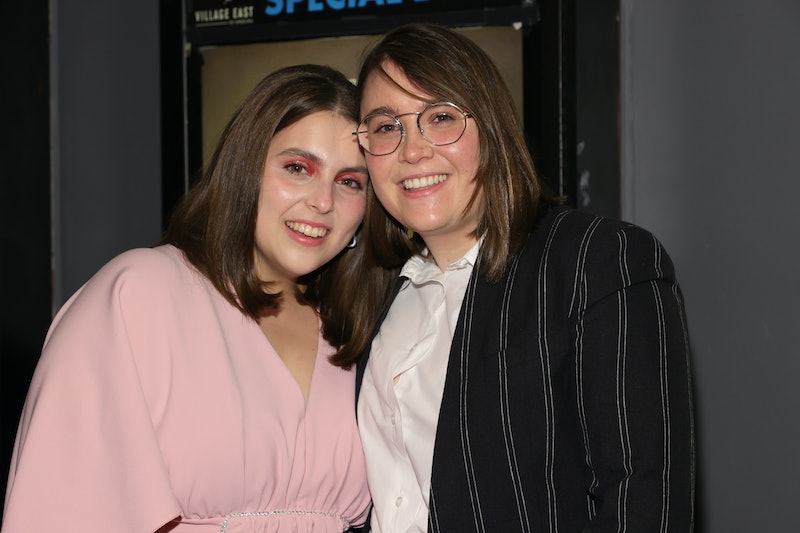 Beanie Feldstein is currently wowing audiences around the world with her portrayal of Monica Lewinsky in the latest American Crime Story event, Impeachment. She worked closely with the woman herself, and they’re both credited as producers on the Ryan Murphy production as well. While that show is about to conclude, Feldstein already has a busy 2022 ahead of her.

In just a few months, Feldstein will return to Broadway as the star of the beloved show Funny Girl. The Lady Bird actor will play the titular role (had to say it), headlining a musical for the first time in her career. Sure to be in the audience on opening night in April 2022 is the comedic talent’s longtime girlfriend, Bonnie Chance Roberts.

The actor and the producer have now been together for more than three years, and they’re still doing great. In fact, according to recent interviews, Jonah Hill’s sister may soon be ready to commit to the movie executive for life!

Take a look at the full timeline of Feldstein and Roberts’ relationship below.

Filming began on the movie How to Build a Girl in July 2018, and that’s where and when Feldstein and Roberts met. Feldstein led the production, starring as Johanna Morrigan, aka Dolly. Roberts was one of the producers, and according to her IMDB page, it marked her first time earning that credit on a full-length feature.

Just a few months after meeting in a professional setting, Feldstein and Roberts appeared to have already taken their relationship to the next level. The actor shared the first picture of the pair on her Instagram, captioning the snap, “A few weeks ago I was in Brighton on this street with this girl and it was magic.” Neither has detailed exactly when they sparked a more personal connection or when their first date was, but it must have been sometime between July and September 2018.

Feldstein openly used the big “L” word on Instagram in December 2018, less than half a year after she and Roberts began dating. She shared a fun photo of her girlfriend, announcing that she took it the day she knew it was love. The actor captioned the pic, “She made fun of my bowling skills and then belted karaoke loud enough for all of london to hear her. she’s the brightest, silliest, warmest, most loving woman and i can’t believe she’s mine. happy birthday, bon. you deserve the world.”

For the next year, Feldstein and Roberts weren’t shy about posting pictures on social media that showed they were spending more and more time together, falling deeper and deeper in love. In June 2019, they celebrated Pride Month together, with the actor captioning a particularly sweet image, “My pride and joy always,” with several rainbow emojis.

After nearly a year-and-a-half of being a very public couple on social media, Feldstein and Roberts finally made their relationship “red carpet official,” something that us mere mortals don’t need to worry about. The pair held hands as they posed for photographers at the premiere of the movie Cats in December 2019. While the movie itself was a financial and critical flop, it was a big moment for Roberts, who was credited as head of film for Monumental Pictures.

Also in December 2019, Teen Vogue published a feature story on Feldstein, whose profile was growing by leaps and bounds at the time. She opened up about her love with Roberts in a way she never had before, telling the journalist penning the article that now that she’s with such a wonderful woman, “I get it…. I get why people write songs.” Also featured in the piece was another deeply personal item, one she hadn’t shared before: “Not to sound flippant, but I was in love with her and all of her, and she’s a woman. That’s not scaring me or deterring me. And it wasn’t just women in general — it was her specifically.”

Right before Christmas, Feldstein took to her Instagram to wish Roberts a happy birthday, and of course she did so with an adorable image and caption, calling her girlfriend “the most remarkable human ever to exist” and “the girl with the warmest heart, the most expansive imagination and the most exceptional brain.” She went on to add that she’s “pretty convinced you’re actually made of magic.”

For her brilliant work in the film Booksmart, which remains a career highlight for Feldstein, the actor was nominated for a Golden Globe in the Best Actress – Motion Picture Comedy or Musical category. While she ended up losing to Awkwafina in The Farewell, it was still a special evening for her, as she and Roberts got to walk the red carpet again and enjoy the night together.

Instead of going the traditional route when it comes to anniversary posts, Feldstein instead opted to use a comic book-style cartoon of her and her love. She captioned the image, simply, “We’re two!!! happy anniversary to my magic girl.”

In an interview with Bustle, Feldstein admitted that not only are things serious with Roberts, but that they are already looking forward to a bright future together. In fact, she claimed she could see them “spending their lives together and starting a family.”

With public health restrictions relaxing (at least temporarily), Feldstein and Roberts were able to celebrate Halloween with the rest of the world. The couple dressed up as Chuck and Blair from Gossip Girl, absolutely nailing their roles.

Before November rolled around, it was announced that Feldstein and Roberts would be working together again, this time on an anthology titled Girls Can’t Shoot (& Other Lies), itself an adaptation of the bestselling essay collection Feminists Don’t Wear Pink (and Other Lies). A number of well-known female Hollywood actors that wrote for the original series are set to star, such as Jameela Jamil, Kat Dennings, and Feldstein. Roberts is on board to co-executive produce alongside Mark Gordon.