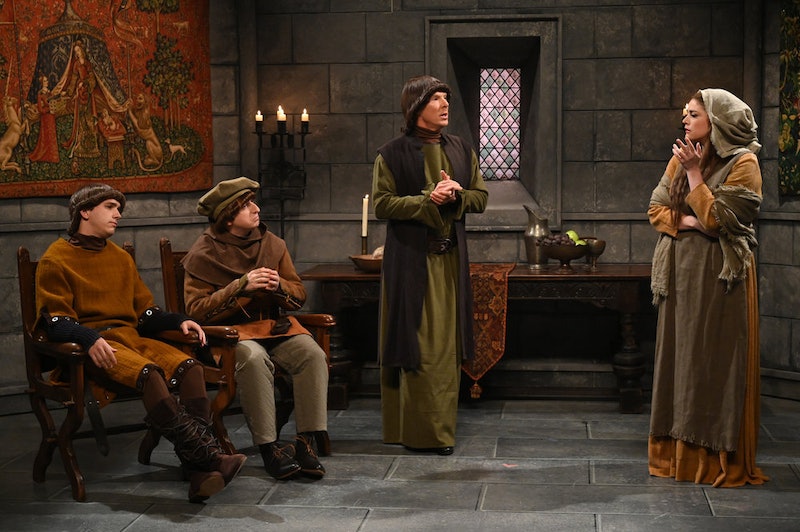 Nearly a week after Politico leaked a U.S. Supreme Court draft that laid bare the court’s intention to overturn Roe v. Wade, Saturday Night Live spoke out against the decision — with some help from the show’s May 7 host, Benedict Cumberbatch.

As the latest SNL cold open points out, Justice Samuel Alito defended the decision to repeal the landmark abortion ruling by citing a 13th-century treatise that, in Middle English, deemed abortion of a “foetus” murder. (Sadly, that bit isn’t SNL parody — you can check the draft text for yourself.)

In the sketch, Cumberbatch plays a medieval man intent on restricting reproductive rights in his own era. “While I was cleaning the hole in the side of the castle where we poop and then it falls through the sky into a moat full of human feces, I started to think about abortion,” he says. “Don’t you think we ought to make a law against it?”

As SNL argues, this wasn’t exactly a time of enlightenment worth borrowing from — other mores cited throughout the sketch include cutting open one’s skull to help their brain breathe, getting castrated for hunting in the wrong forest, and murdering left-handed children. As Cecily Strong’s Margaret wonders, “I just don’t understand why you’re so obsessed with this issue. Like, what about the fact that no one can read or write, and everyone’s dying of plague?”

Kate McKinnon ultimately appears — the men think she’s a witch, naturally — and delivers an optimistic rallying cry. “No matter how many choices they take away from women, we’ve always got the choice to keep fighting.”

The episode had multiple segments devoted to battling the recent threat to Roe v. Wade. McKinnon also played conservative Supreme Court Justice Amy Coney Barrett, appearing during Weekend Update. There, she expressed confusion about why people would need abortion in the first place, when “you can leave a baby anywhere in the United States” with safe haven laws. “What’s the big deal?” she asked. “Just pop it. Just do the nine and plus.”

It’s not the first time SNL has addressed abortion rights this season. In November, Strong herself told the story of the abortion she’d had in early 20s — only she did so from the perspective of a circus clown “to make it more palatable.”

“I know I wouldn’t be a clown on TV here today if it weren’t for the abortion the day before my 23rd birthday,” Strong said at the time. “Clowns have been helping each other end their pregnancies since the caves. It’s going to happen, so it ought to be safe, legal, and accessible.”