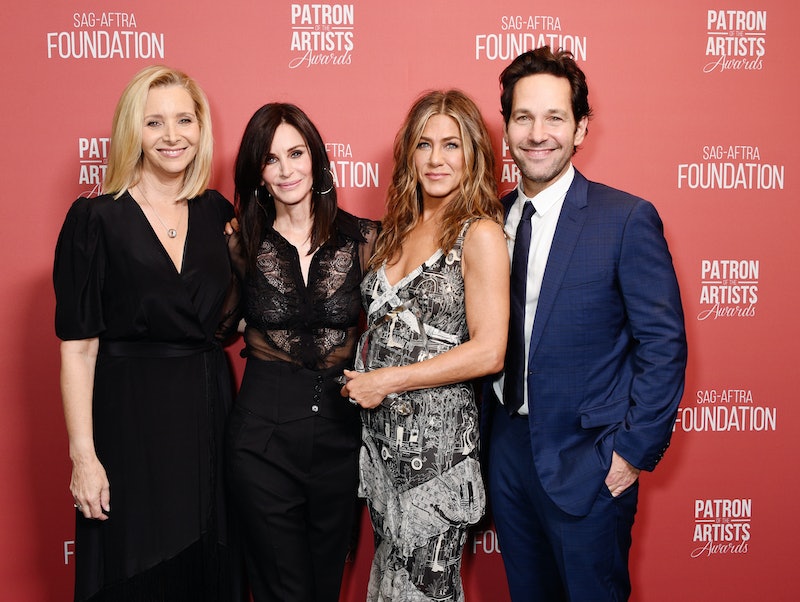 After dropping on HBO Max May 27, Friends: The Reunion became an essential Twitter talking point, with users praising the recreation of memorable scenes and discussing the slew of visitors who came to pay tribute to the show along with those who didn’t. In addition to its beloved core cast, the highly anticipated Friends reunion featured an abundance of celebrity cameos — from Justin Bieber to Malala Yousafzai, the Friends fans ran the gamut, all showing up in support of the iconic sitcom. Many of the show’s past guest stars turned up for the emotional special as well, including several of the six friends’ former flames like Tom Selleck (Richard) and — Oh! My! God! — Maggie Wheeler (Janice).

However, much to fans’ chagrin, one of the show’s most memorable guest actors, Paul Rudd (Mike), was not among the star-studded lineup. The Ant-Man star has previously questioned his character’s role in essential Friends moments, like the finale (“I’m not supposed to be here,” he joked to Graham Norton in 2019), so it’s likely Rudd’s absence here was him letting the main stars shine. Still, Twitter was in an uproar about his absence, especially following the just-released footage of him filming the Friends finale bow with a camcorder, which appeared during the reunion. Here is everything Friends Twitter had to say about that moment and the eventful streaming special.

User shayhbaz was among fans calling for a Rudd’s-eye-view of the Friends finale.

Rudd did, at least, make an appearance in some of the post-reunion memes.

During the reunion, David Schwimmer and Jennifer Aniston talked about the crush they had on each other in the early days of Friends — they even cuddled together between rehearsals — which had many Twitter users feeling the love.

How Far The Friends Have Come

For many Twitter users, comparing past and present images of the Friends cast showed how little has changed since the show ended in 2004.

More like this
The 8 Best Aidan Shaw Moments On 'Sex And The City'
By Grace Wehniainen
'Brookside' Is Coming Back & Soap Opera Fans Are Going Wild
By Sam Ramsden
'That '90s Show' Star Callie Haverda Got Advice From Mila Kunis & Ashton Kutcher
By Brad Witter
Here’s Why Danny Masterson’s Hyde Isn’t In 'That '90s Show'
By Brad Witter
Get Even More From Bustle — Sign Up For The Newsletter
From hair trends to relationship advice, our daily newsletter has everything you need to sound like a person who’s on TikTok, even if you aren’t.