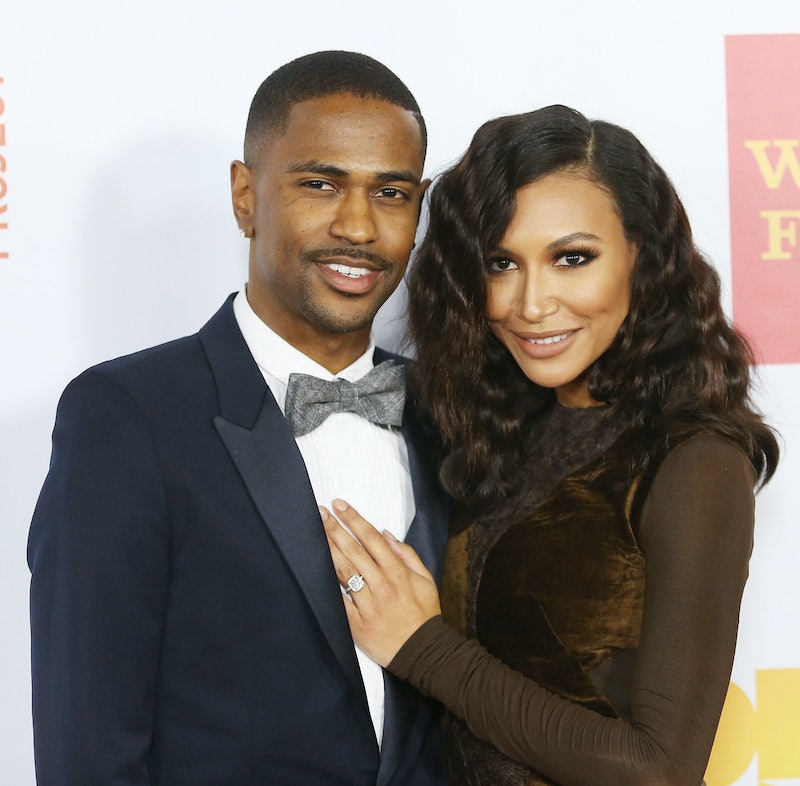 Four days after the Glee star's tragic death was confirmed, Big Sean shared a touching tribute to former fiancée Naya Rivera on Instagram, where he described her as a "hero" to both her 4-year-old son and the fans she inspired throughout her career. The rapper has been mostly silent on social media in the week since Rivera was first reported missing, though he did like several posts on Twitter sending prayers to her family and wishing for her safe return. However, in his Instagram post — which he shared on July 17 — Big Sean explained that he is still "in shock" from the news and is mourning his former partner right now.

"Rest In Peace Naya, God Bless your Soul! Thank you for blessing us all with your talent and presence," the rapper wrote, alongside a black-and-white photo of Rivera and another snapshot of her holding her son, Josey. "You are a hero! Not just because of how you saved your son, also because of the barriers you knocked down for so many people to make them feel confident in themselves and to stand tall and be proud when they couldn’t achieve that on their own."

He continued by acknowledging the impact that Rivera had on his life as well, writing that, "I appreciate and cherish everything that ever happened between us for making me wiser and a better person." Adding that "I’m still grieving and in shock, I can’t believe this is real," the rapper concluded his post by sending support to Rivera's family and loved ones. "I’m praying for you and your family and I know your watching over them and protecting them," Big Sean wrote. "Rest In Peace Naya."

Big Sean and Rivera first met on Twitter in 2013, and the rapper was featured on her debut single, "Sorry," that same year. The couple confirmed their engagement in October 2013, just six months after they publicly confirmed their relationship, though they broke up by April 2014 after about a year together. "After careful thought and much consideration, Sean has made the difficult decision to call the wedding off," the rapper's reps said in a statement to Us Weekly at the time.

Rivera was reported missing on July 8 after taking a trip to Lake Piru in California with her son, Josey. After a five day search, her body was recovered from the lake on July 13, and shortly afterwards, authorities confirmed that she had likely drowned after getting caught on something underwater or caught up in a strong current. "The idea perhaps being that the boat started drifting — it was un-anchored — and that she mustered enough energy to get her son back into the boat, but not herself," the Ventura County Sheriff said told reporters at the time, though he added that authorities were speculating about the events that occurred.

On July 14, Rivera's family released a statement to Deadline thanking everyone for their support and well-wishes. "We are so grateful for the outpouring of love and prayers for Naya, Josey and our family over the past week," the statement read. "While we grieve the loss of our beautiful legend, we are blessed to honor her everlasting legacy and magnetic spirit. Naya was an amazing talent, but was an even greater person, mother, daughter and sister."

More like this
Lea Michele Explains Why She's Never Watched 'Glee's Cory Monteith Tribute Episode
By Jake Viswanath
Olivia Rodrigo Reunited With Joshua Bassett On The Red Carpet & Twitter Can’t Handle It
By Jake Viswanath
Jane Lynch Revealed Why She’s Leaving 'Funny Girl' After Lea Michele Was Cast
By Grace Wehniainen
Who Is Camila Cabello Dating? She's Getting Cozy With Lox Club CEO Austin Kevitch
By Radhika Menon
Get Even More From Bustle — Sign Up For The Newsletter