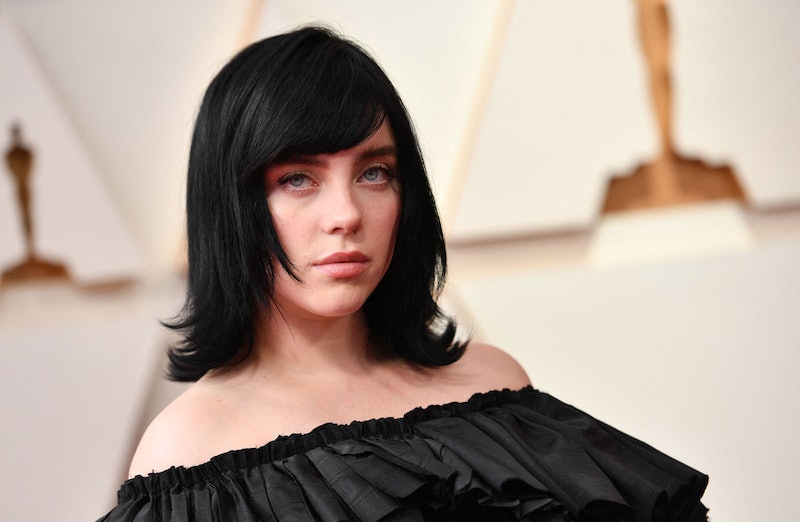 The 2022 Oscars ceremony was a big night for Billie Eilish, who not only performed “No Time to Die” but also brought home Best Original Song for the James Bond track, too. The momentous evening started with the red carpet, of course, where Eilish sported a dramatic black Gucci gown and was possibly joined by her rumored boyfriend, Matthew Tyler Vorce, off-camera.

Eilish’s ensemble didn’t impress one TikTok user, koltenkephart, who named the “Happier Than Ever” singer one of the “worst dressed Oscar looks.” The critique was brief but very harsh — specifically, the user said they’ve “had enough of her sh*t.” Fortunately, the comment doesn’t seem to have bothered Eilish too much. In fact, she hopped onto the platform (and onto the toilet) to share her own video response.

In her March 30 TikTok, Eilish filmed herself sitting in the bathroom with her pants down, simply sharing a peace sign as she duetted the original “review.” She didn’t say anything in the short clip (her power!) but quipped in the caption, “i HAVENT had enough of my sh*t. i am sh*tting right now.” In the TikTok’s first 16 hours, it received more than 20 million views and 4 million likes — proof that her fans cosigned the hilarious, unbothered response.

It’s not the first time Eilish has clapped back to criticism on TikTok — even if it’s not aimed at her. Earlier this year, she criticized Benny Blanco for calling Charlie Puth “a f*cking loser ... [for sitting] in a room all day and [making] TikToks.” Eilish asked in her own video, “What do you do all day, Benny? The same thing.”

Eilish isn’t necessarily the most active celebrity TikToker out there, but she may be trying to change that. Hours after her toilet moment, she shared her attempt on the “wake up with me for a week” trend in which users are supposed to share footage from their morning routine for a whole week. As she revealed in the video, she simply forgot to film anything.

More like this
Katy Perry Regrets Not Working With Billie Eilish On “Ocean Eyes”
By Alyssa Lapid
Cruz Beckham Teased New Music With An Adorable Nod To Mom Victoria Beckham
By Stephanie Topacio Long
Paul Mescal’s Family Celebrated His Oscar Nomination In The Sweetest Way
By El Hunt
The History Of Taylor Swift's "All Too Well" & What The Lyrics Actually Mean
By Jake Viswanath
Get Even More From Bustle — Sign Up For The Newsletter
From hair trends to relationship advice, our daily newsletter has everything you need to sound like a person who’s on TikTok, even if you aren’t.