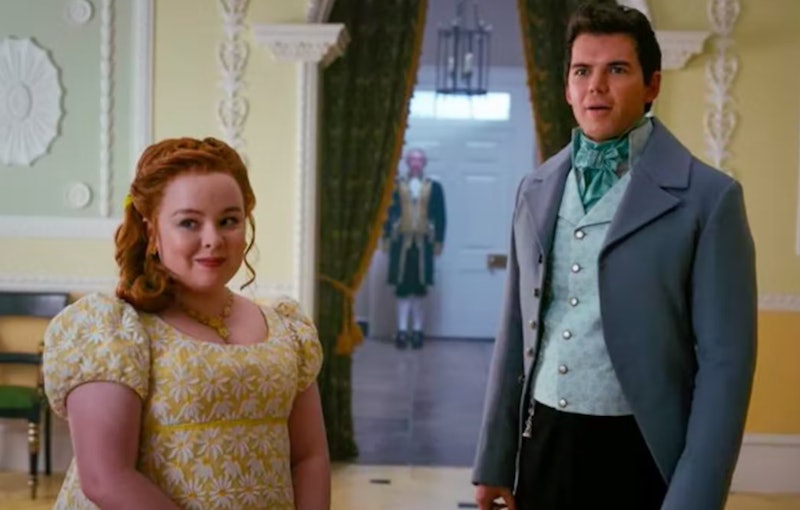 As fans eagerly await the next instalment of the period drama that is Bridgerton, Netflix has shared a rather sweet Instagram post with one of our favourite duos, Penelope Featherington and Eloise Bridgerton. Played by Nicola Coughlan and Claudia Jessie, the characters can be seen wearing their finest Regency costumes in one picture, whilst another shows a sweet behind-the-scenes moment of the actors embracing each other. The image (appearing on slide six of a multi-picture upload) was captioned with, “when your work friends are also your friend friends.”

Fans love this power couple so much that the duo has now been dubbed “Peneloise,” with their friendship being the true star of the show. In May, Coughlan shared an Instagram post of a Bridgerton billboard that pictured her and Jessie in character. She wrote: “The loveliest gal you could ever be on a billboard with. We did a take of this scene where we were asked not to hold hands just to have it as an option, but I’m forever glad this is the version that got chosen.”

The last time we saw Penelope and Eloise was in the Season 2 finale where the friends had an explosive and revealing argument, with Eloise finding out that Penelope is Lady Whistledown. She told her pal that she never wanted to see her again.

In April, Coughlan shared her experience of filming such a scene with her real-life friend. “Friendship breakups are just so horrendous,” she told E!. “To film that scene was really harrowing and actually, like, made me feel sick to my stomach.” The actor added that her and Jessie both ended up crying during filming. Well, here’s hoping that Pen’ and Eloise find a way back to each other sooner rather than later.

More like this
'Bridgerton' S3 Will Show A *Very* Different Side To Kanthony
By Sam Ramsden
Everything To Know About The 'Daisy Jones & The Six' TV Series
By Maxine Harrison and Brad Witter
A New Netflix Doc Will Explore The Unsolved Murder Of Jill Dando
By Sam Ramsden
The Banned 'Friends' Ad Shows Monica As You’ve Never Seen Her Before
By Sam Ramsden
Get The Very Best Of Bustle/UK
Sign up for Bustle UK's twice-weekly newsletter, featuring the latest must-watch TV, moving personal stories, and expert advice on the hottest viral buys.