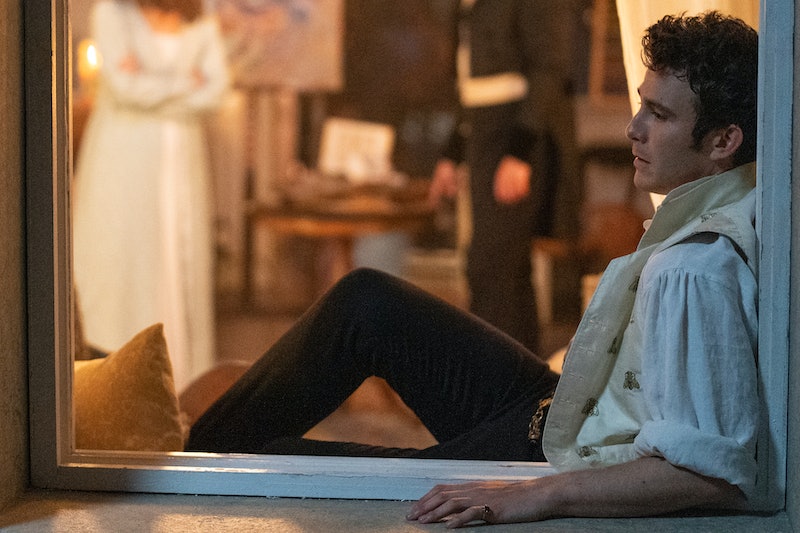 Spoilers for Benedict Bridgerton’s storyline in Bridgerton ahead.

Daphne may be the focal point of Bridgerton’s first season, and Anthony’s plight to find a wife the focus of season two, but the Netflix series sets up potential relationships for the Benedict and Colin Bridgerton, too. The end of season one was a little more convoluted for Anthony and Colin, granted, but by the end of season one of the Netflix series Benedict is happily in love with the Ton’s modiste, Genevieve Delacroix. However, judging by the third book in Julia Quinn’s Bridgerton series, it seems their relationship isn’t marriage material. Instead, his story ends up quite literally following the same path as a rather famous fairytale. But who does Benedict Bridgerton marry?

Julia Quinn’s third book, An Offer From A Gentleman, begins with the story of Sophie Beckett, the illegitimate daughter of the Earl of Penwood. Instead of raising her as his daughter, Sophie becomes his “ward” and lives under the watchful eye of her stepmother, Araminta, who also happens to have two daughters (you can see where this is going). As Sophie’s Cinderella story continues, she manages to sneak into one of Lady Bridgerton’s masquerade balls. She steals a dance with Benedict, and the pair share an instant connection. But the magical moment doesn’t last long, as Sophie darts from the ball without Benedict catching her name or seeing her face.

Two years pass, and Benedict is still enamoured by his chance encounter with Sophie. So much so that he vowed to find and marry the woman he danced with that night. That is until he starts to fall for the Bridgerton’s new housemaid. And who would she be if not Sophie? Since the ball, she was kicked out by her wicked stepmother and forced to work for an employer whose son tries to take advantage of her.

Wondering why he’s so drawn to her, he starts to fall for the housemaid. But due to their differences in social class, Benedict is wary of making anything official. Instead, he asks her to be his mistress – which doesn’t go down well at all (duh, Benedict). Of course, he eventually discovers that the housemaid was the woman he’s been searching for after all this time which causes a ton of drama, leaving Sophie jobless and in jail after her stepmother accuses her of being a thief.

Thankfully, the Bridgerton family as a whole grew so fond of Sophie during her time with them. After discovering that she’s in jail from Lady Whistledown, the family rescue her. By the prologue, Benedict and Sophie are officially married and seven years down the line they’re expecting their fourth child. A happily ever after indeed.

Speaking about the Netflix series, the showrunner and executive producer of the series, Chris Van Dusen, said they had plans to explore Benedict’s sexual fluidity, though. So perhaps there will be new storylines than those directly taken from Julia Quinn’s novels. Watch this space.

More like this
Twitter Is Burning As Phoebe Dynevor Reveals Daphne’s 'Bridgerton' Exit
By Sophie McEvoy
Helena Bonham Carter Doesn't Think 'The Crown' “Should Carry On"
By Sam Ramsden
Everything To Know About The 'Daisy Jones & The Six' TV Series
By Maxine Harrison and Brad Witter
'Brookside' Is Coming Back & Soap Opera Fans Are Going Wild
By Sam Ramsden
Get The Very Best Of Bustle/UK
Sign up for Bustle UK's twice-weekly newsletter, featuring the latest must-watch TV, moving personal stories, and expert advice on the hottest viral buys.