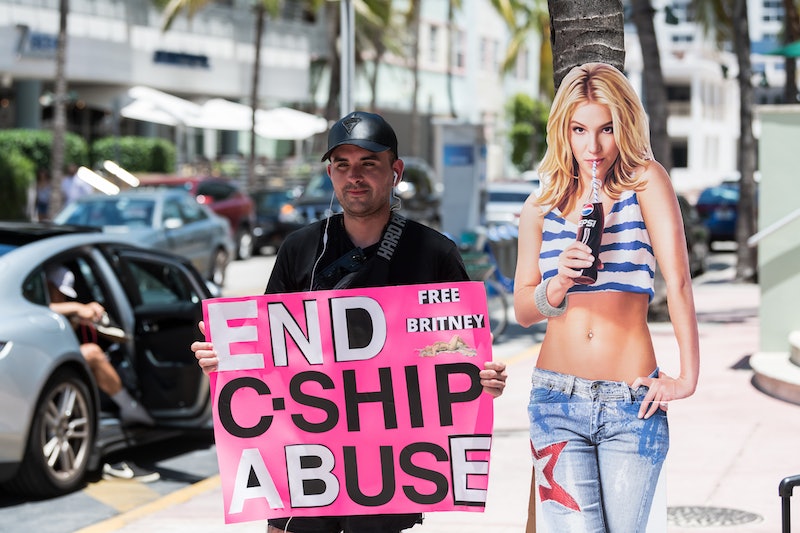 Britney Spears’ next hearing could change everything for her. Spears’ conservatorship will be up for review in court once again on Sept. 29, and Judge Brenda Penny is set to address several recent developments in the case — from Spears’ petition to remove her father, Jamie Spears, as conservator of her estate, to Jamie’s surprising petition to end the legal arrangement altogether. If Judge Penny decides to grant Jamie’s request, then Spears could be theoretically freed from her conservatorship as soon as next week. But of course, there are several factors complicating matters.

During a previous court hearing, on July 14, the singer was finally granted the authority to hire her own legal representation, and has subsequently retained celebrity attorney and former prosecutor Mathew A. Rosengart as her attorney. Two weeks after he was hired, Rosengart officially filed a petition demanding that Jamie step down from the conservatorship. Rosengart also requested to have the date of her next hearing moved up from the current date of Sept. 29 to Aug. 23, in the hopes of expediting Jamie’s removal. However, Judge Penny denied the request without explanation.

Jamie initially seemed to agree that he should be removed, and filed his own papers declaring that he would step down as conservator of Spears’ estate. However, on Sept. 6, he filed legal documents requesting that his daughter’s conservatorship instead be terminated completely — something the singer has also requested. All this sets the stage for the court hearing on Sept. 29 to (potentially) be a game-changer. Here’s what to expect from Spears’ next hearing.

Will Britney Speak At The Sept. 29 Hearing?

Spears is not currently scheduled to speak at the Sept. 29 hearing. However, she was not expected to speak out on July 14, and still ended up deciding to do so. In recent months, Spears has also been more vocal about her experiences on social media, indicating that she’s less afraid to air her grievances — so it’s entirely possible that she’ll decide to take the mic again come Wednesday.

Will Jamie Be Removed As Conservator?

On June 23, Spears spoke out against her conservatorship for the first time in court, accusing Jamie of allegedly holding her in a mental health facility against her will in 2019, and forcing her to continue using an IUD, among other shocking claims. (Jamie has denied all wrongdoing and any accusations of abuse.) “I just want my life back,” she said. “I truly believe this conservatorship is abusive.” The singer spoke against her father once again at a hearing on July 14, reiterating complaints about his alleged control over her life.

On July 27, Rosengart took his first action as Spears’ newly-hired attorney: filing an official petition to request that Jamie be removed as conservator of her estate, which argued that Spears’ father was “stripping his daughter of her dignity, autonomy, and certain fundamental liberties.” Days after Rosengart’s filing, Spears’ father filed his own documents declaring his intent to step down and work with the court and Rosengart “to prepare for an orderly transition to a new conservator.” (Despite this, Jamie still maintained that there were “no actual grounds” for his removal.)

On Sept. 22, Rosengart told a judge that he anticipated Spears’ conservatorship to end “completely and inevitably” this fall, per Variety. In a court filing, however, he said his first priority is still to remove Jamie; to that end, Rosengart has requested that Jamie be replaced with a “temporary, short-term” outside conservator on Sept. 29. According to Rosengart, Spears does not want her father overseeing the pre-nuptial agreement she plans to draft with her fiancé, Sam Asghari.

Judge Penny will address the petitions on Sept. 29.

On Sept. 6, in a surprise move, Spears’ father filed a petition to end the conservatorship. “If Ms. Spears wants to terminate the conservatorship and believes that she can handle her own life, Mr. Spears believes that she should get that chance,” the petition stated, echoing sentiments expressed by #FreeBritney supporters since 2019. The filing came just days after Rosengart accused Jamie of attempting to extort the singer out of over $2 million before he stepped down as conservator of her estate.

Rosengart has acknowledged that Jamie’s petition is a massive legal victory and “vindication” for his client. In his Sept. 22 filings, Rosengart said Spears fully agreed that her conservatorship should end, but made it clear that removing Jamie as conservator was still his and Spears’ top priority.

Judge Penny will also address this request on Sept. 29. Previously, Spears advocated that her conservatorship be ended without further evaluations of her mental health. Legal experts have told Variety that the court releasing Spears without evaluation is highly unlikely, but should Judge Penny decide that it’s not necessary, the conservatorship could be over as soon as next week. Should she choose to have Spears evaluated, the process will be drawn out much longer.

It’s also possible that rather than ending the conservatorship — or before doing so — the court will choose to suspend Jamie and appoint another qualified individual to oversee her estate, as Rosengart has requested. Alternately, the status quo might remain for a time, with a few more months before any concrete changes are made to Spears’ legal arrangement. Regardless of what Judge Penny decides on Sept. 29, experts told Variety that Rosengart is likely correct: Spears’ situation could end before 2021 is over — much sooner than even the biggest #FreeBritney supporters imagined. Now, it all lies in the court’s hands.