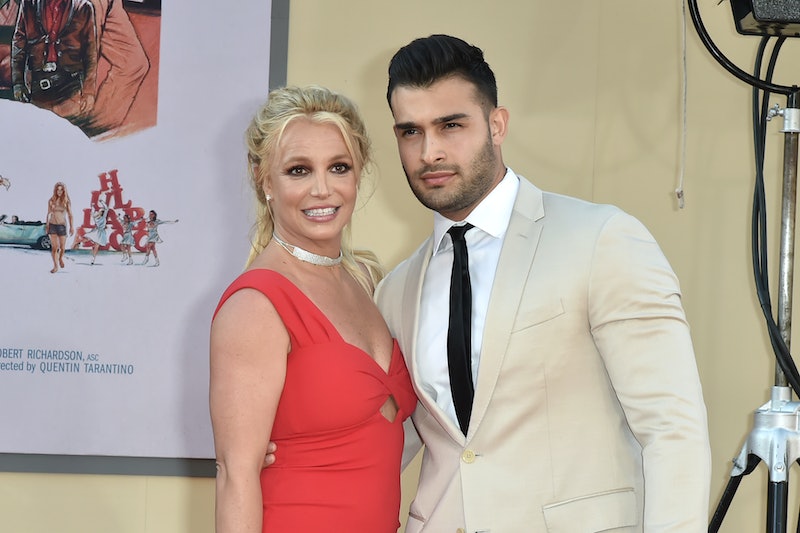 Britney Spears’ father Jamie was removed as conservator of her estate, effective immediately on Sept. 29, after months of legal petitions and emotional testimonies from the pop star. Now, it appears that she and her new fiancé Sam Asghari responded to Jamie Spears’ suspension in separate Instagram postings, and their happiness at the big news is palpable.

After the hearing concluded, the “Overprotected” singer posted a slideshow comprised of two videos of her flying in the cockpit of a plane over a vast ocean setting, as well as a photo of luscious palm trees. In her caption, Spears alluded to her joy without directly mentioning her father or the court hearing. “On cloud 9 right now,” she wrote, before promptly switching gears to talk about her pilot experience. “First time flying a plane and first time in a prop plane !!! Geez I was scared!!!” In her next sentence, Spears seemingly referenced her sister Jamie Lynn, who she reportedly threw shade at in a July post, writing, “Pssss bringing the ship home JL.” She ended her post by telling her followers to “stay classy” and promising that more photos were coming soon.

READ NEXT: 6 Shocking Revelations From Netflix’s ‘Britney vs Spears’

Spears first spoke out against her father and the conservatorship as a whole, during an emotional testimony on June 23, at which time she accused her now-former conservator of holding her in a mental health facility against her will and forcing her to wear an IUD to prevent pregnancy. She spoke out again on July 14, declaring that she wants to charge Jamie with conservatorship abuse. During the Sept. 29 hearing, Judge Brenda Penny agreed with Spears’ new lawyer Mathew Rosengart, saying that Jamie’s suspension “is in the best interest of the conservatee” and “the current situation is not tenable.”

Soon after the judge made her verdict, Asghari celebrated on his Instagram Story, with multiple posts. “Free Britney! Congratulations!!!!!!!!!” he wrote in one post, before sharing a touching photo of him holding Spears’ hand and showing off her new engagement ring. He also posted a picture of a lioness, which he often calls Spears as a petname that represents her strength during this public ordeal. “She did this,” he wrote. “Her fan base is a called the army for a reason.”

Spears first started dating Asghari in 2016 after they met on set of her “Slumber Party” music video, where he plays the singer’s seductive love interest. After dating for nearly five years, the pair got engaged on Sept. 12, which Spears announced on Instagram by showing off her new bling in a joyous video. Her next — and possibly final —  conservatorship hearing is set for Nov. 12, when Rosengart is expecting to terminate the legal arrangement for good. If all goes to her plan, Spears will be getting married as a free woman.

More like this
Julia Fox Says She Dated Kanye To “Distract Him” So He’d Leave Kim K Alone
By Jake Viswanath
Olivia Wilde & Harry Styles Are Reportedly "Taking A Break" After Almost 2 Years
By Jake Viswanath and Radhika Menon
The 'Love, Lizzo' Harry Styles Scene Is Just 1 Moment That Made Fans Feel Seen
By Brad Witter
Selena Gomez & Blackpink's Post-Show Meetup Left Fans Thirsty For More
By Stephanie Topacio Long
Get Even More From Bustle — Sign Up For The Newsletter