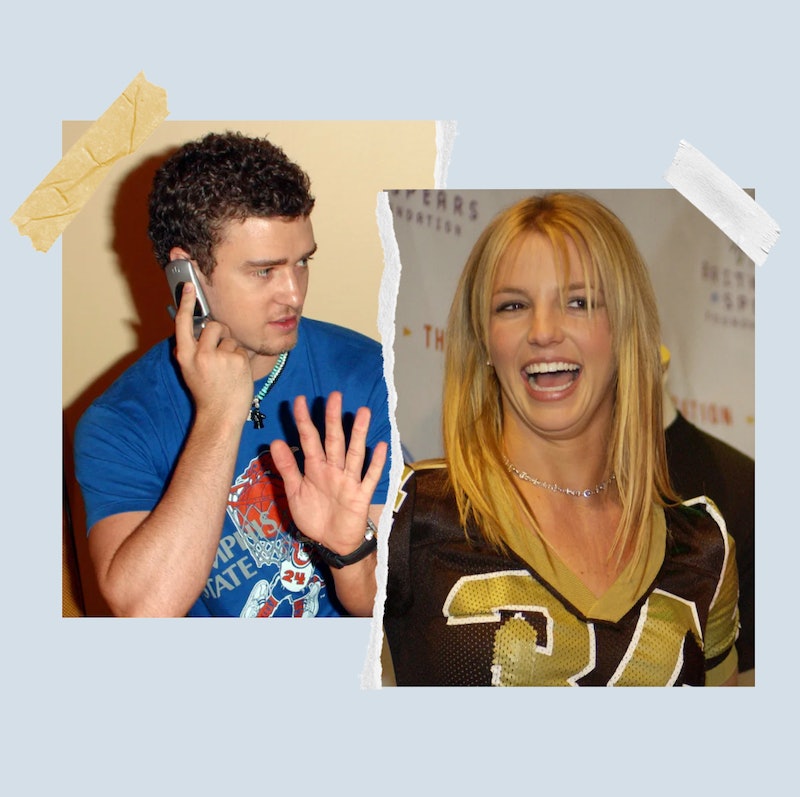 The Princess of Pop may forgive, but she never forgets. Britney Spears poked fun at Justin Timberlake’s infamous “Cry Me A River” music video, which features a lookalike playing her in an unfair light. On Oct. 13, Spears posted an Instagram video of her modeling several different looks, including a black lace blouse paired with a white knee-length skirt. When paired with a grey newsboy cap, the outfit reminded her of the controversial music video.

“Hmmmm something looks familiar …. The hat….,” she wrote in the caption. “Wait I look like that girl in the Justin Timberlake video with that hat in Cry Me A River !!! Oh sh*t that’s ME !!! I’m Britney Spears??? I guess I forget that sometimes.” After Spears and Timberlake broke up in 2002, Timberlake released the “Cry Me A River” video, which depicts an unknown lookalike of her cheating on him. To make his point clear, the lookalike sported many of her iconic style staples, including her bootleg jeans, blonde hairstyle, and the same newsboy cap that Spears just spoofed on Instagram.

Although the cause of Spears and Timberlake’s split remains unknown to this day, thanks to Timberlake’s video, the narrative that Spears cheated became the dominant story in the media. However, Hulu’s New York Times documentary Framing Britney Spears resurfaced misogynist remarks that Timberlake made about Spears in interviews at the time, reminding viewers how he contributed to the tabloids’ derogatory treatment of his ex.

Eventually, the backlash grew so big that Timberlake publicly apologized to Spears after the doc’s premiere in February 2021. “I am deeply sorry for the times in my life where my actions contributed to the problem, where I spoke out of turn, or did not speak up for what was right,” he wrote in an Instagram post. “I specifically want to apologize to Britney Spears and Janet Jackson both individually, because I care for and respect these women and I know I failed.”

In her new Instagram caption, Spears also joked about the white doctor’s coat that her lookalike wore in the video. “Oh sh*t I look like a doctor in this video too though with the white coat … maybe I’M THE DOCTOR,” she wrote. “I mean who’s playing who ??? I mean my brother wears that kind of hat … but wait the skirt … I haven’t worn a skirt in forever !!! Am I Britney Spears ??? Psssss HMMM all this time ??? Play on my icons … play on!!!!”

For her part, Spears hasn’t seemed to harbor much ill will towards her ex, even dancing to his songs on Instagram multiple times. However, in 2004, she did comment on the “Cry Me A River” video in an interview with Rolling Stone, revealing that Timberlake warned her about the clip, but she decided to take the high road rather than pull it, something she quickly regretted.

“He called me up and behind it was, ‘And by the way, you’re in a video that’s coming out. Don’t worry about it. It’s not a big deal,’” she recalled. “The record label called and said, ‘If you want to change this, you can.’ I had the power to say no to the video. But I didn’t, because I thought, ‘Hey, it’s your video.’ I hadn’t seen it. Then it came out, and I said, ‘I should’ve freakin’ said no to this sh*t!’ I was so like, ‘Woah. What is going on right now?’ I think it looks like such a desperate attempt, personally. But that was a great way to sell the record. He’s smart. Smart guy.”

More like this
Britney Spears Shared The Real Reason She Shut Down Her Instagram Account
By Brad Witter
Olivia Rodrigo Manifested Finally Meeting Demi Lovato
By Jake Viswanath
Taylor Lautner Thought Taylor Swift's 2009 VMAs Interruption Was A "Skit"
By Alyssa Lapid
The Jonas Brothers' New Album Has A Very Meta Name
By Alyssa Lapid
Get Even More From Bustle — Sign Up For The Newsletter
From hair trends to relationship advice, our daily newsletter has everything you need to sound like a person who’s on TikTok, even if you aren’t.