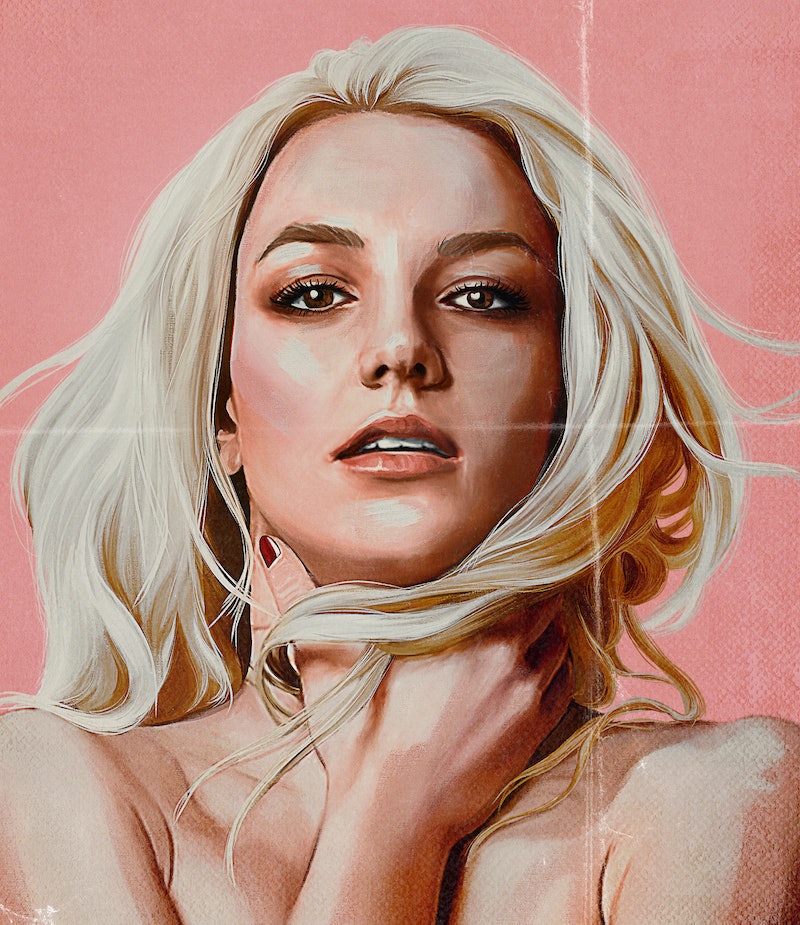 Netflix is getting in on the Britney Spears documentary business with the anticipated premiere of Britney vs. Spears on Sept. 28, giving fans new details about the singer’s controversial conservatorship and a stark reminder of what she’s gone through. Netflix’s film comes just one day before Spears’ next court hearing on Sept. 29, which could potentially free Spears from the long-running legal arrangement or keep it going for at least a few months or even longer.

News that Netflix was working on a film about Spears was revealed in February, just days after The New York Times’ documentary Framing Britney Spears premiered on FX and Hulu. The game-changing doc focused on Spears’ fraught relationship with the media during 2000s tabloid culture and how it ultimately led to her current situation, causing a renewed interest in Spears’ conservatorship — and overdue apologies from past figures in her life. Since then, Spears spoke out publicly for the first time in court, calling the conservatorship “abusive,” comparing it to sex trafficking, and saying her father and conservator Jamie “loved” having control over her.

Three days before Netflix released Britney vs. Spears, the team behind Framing Britney Spears surprise-released a sequel, Controlling Britney Spears, that looked more in-depth into the mechanics behind her conservatorship, including people that worked with Jamie to allegedly control most aspects of her life. Now, through Netflix, journalist Jenny Eliscu and director Erin Lee Carr have given fans an even deeper look into what Spears has been dealing with for the past 13 years, and with each new detail comes another punch to the gut.

Here’s what we learned from Britney vs. Spears.

1. Britney Didn’t Want Her Father To Be Her Conservator Since The Start

In 2009, before her Circus Tour, Spears started working with lawyer Adam Streisand, who advocated to the court on Spears’ behalf. According to Streisand, at the time, Spears was willing to cooperate with the conservatorship as a whole but stressed that she did not want her father Jamie involved in any capacity. “So we walk into court and I said, ‘Your honor, she doesn’t want her father to be conservator. She wants an independent to be the conservator’,” he recalled. “She clearly understood the concept of a conservatorship. She understood what was going to happen. She could make some decisions about it.”

However, the judge had already approved declaration that Spears was deemed medically incapable to choose her own attorney. “When I told the judge what Britney wanted, the judge looked and me and said, ‘Mr. Streisand, I have a report that she does not have the capacity to retain counsel and have an attorney-client relationship. So I’m sorry, Mr. Streisand, but you’re not going to be able to represent her and I need to ask you to leave the courtroom.’ And I did.”

When Streisand was dismissed, the court appointed Samuel D. Ingham III to serve as Spears’ attorney, and while he can’t attest to what he did for the singer, Streisand wondered if Ingham truly fought to keep Jamie away from the conservatorship. “I can’t tell you what happened in court after I left,” he said. “I don’t know whether Sam Ingham argued the way that I argued that the conservator shouldn’t be Britney’s father. I have my suspicions. I sure hope Sam Ingham fought hard against it, but I never heard that he did.” Ingham did not respond to the filmmakers’ request for comment.

2. A Britney Voicemail & Letter Reveal Threats To Take Her Kids Away

Andrew Gallery, Spears’ former friend and photographer who also worked on her 2008 MTV documentary For the Record, revealed a letter — allegedly written by Spears in the third person around the time that the conservatorship was put into place — pointing out how much money Jamie and her conservatorship team made off the arrangement.

“Now this year Britney has been silenced to speak out about anything that’s going on,” she allegedly wrote. “The people controlling her life have made $3 million this year. She would love for new eyes to see her situation, but if she brings it up, she’s constantly threatened that the conservators will take her kids away.” While she doesn’t name any specific person other than her family, she does hint that there’s more people calling the shots besides Jamie, her primary personal conservator at the time.

“My father has threatened me several times ... he’ll take my children away. I just want to be guaranteed that everything will be fine ... [and] that things will stay the same as far as my custodial time. That’s it, bye.”

The looming threat of Spears’ children being taken away was confirmed in a voicemail left by the singer to an unspecified lawyer that was obtained by the filmmakers. “Hi, my name is Britney Spears, I called you earlier,” she said. “I’m calling again because I just wanted to make sure [you knew] that during the process of eliminating the conservatorship, that my father has threatened me several times ... he’ll take my children away. I just want to be guaranteed that everything will be fine with the process of you guys taking care of everything that things will stay the same as far as my custodial time. That’s it, bye.”

3. A Journalist Secretly Met Britney In A Bathroom To Help Her Hire A New Lawyer

Journalist Eliscu said that she attempted to help Spears acquire a new attorney in 2009, only a year into the conservatorship. Having developed a relationship with Spears by talking to her for two Rolling Stone cover stories, she was tasked with delivering a document for Spears to secretly sign that expressed her dissatisfaction with Ingham. “Ms. Spears is of the opinion that he is not advocating adequately on her behalf particularly in light of the severe restrictions placed upon her,” the document stated.

The journalist was successfully able to meet secretly with Spears in a hotel bathroom so she can sign the document. “She looked at me and said, ‘Thank you,’ and I said, ‘I’ll see you again’,” she recalled, beginning to tear up. “She definitely seemed scared. It was hard to tell because I was so scared but she was so appreciative.” However, similar to what happened with Streisand, the court had already determined that she “lacked the capacity” to choose her own lawyer, and even casted doubt on whether that was Spears’ legitimate signature.

“Jamie’s abuses revealed in this film corroborate what Britney and I have said in court: Jamie Spears is toxic to the well-being of Britney and she deserves to be free.”

More than ten years later, Spears was finally granted the power to hire her own legal counsel in a July 14 hearing, and retained Hollywood lawyer and former prosecutor Mathew Rosengart as her attorney. In a statement, Rosengart told the filmmakers, “Jamie’s abuses revealed in this film corroborate what Britney and I have said in court: Jamie Spears is toxic to the well-being of Britney and she deserves to be free.”

In 2009, Spears started dating her then-agent Jason Trawick. After the pair became engaged in December 2011, she requested that Trawick become her new conservator. However, instead of replacing her father, the court declared that Jamie and Trawick would become Spears’ co-conservators. In new documents unveiled by the filmmakers, prior to being named on the conservatorship, one of Spears’ doctors interviewed Trawick. “I found him to be forthcoming and open, though fearful that whatever he said might he held against him or place him at odds with others with whom he might need to get along in the future,” the report stated.

According to the document, Trawick said that Spears “would have to learn to live without” a conservator, and that the legal arrangement was too “constrictive.” Trawick said they were not allowed to drive a golf cart in their neighborhood, go to a local burger joint, or buy books for Spears’ children without the permission of her conservator.

Much has been said about Jamie’s alleged alcohol abuse and the damage it did on Spears’ family and childhood. Unbeknownst to many, it apparently affected the conservatorship: According to the doctor’s interview with Trawick, her then-fiancé also revealed that Spears “began to complain” about her father’s drinking in 2011, toward the end of her Femme Fatale Tour.

“She was especially adamant that Jamie be punished,” the report stated. “This seems to be a lightning rod for all her complaints about the conservatorship itself. In a simple way, she feels that if she is drug tested, so should he be. And if she were to suffer a grave penalty like losing her kids if she tested positive, he should suffer an equally great penalty for his drinking.”

According to documents uncovered by the filmmakers, Spears’ medical team initially didn’t approve her judging stint on the second season of The X Factor in 2012, saying it could put “undue pressure” on the singer. However, Spears’ then-manager Larry Rudolph argued that withdrawing from the show would cause more stress on her, as the public response would be just as bad as a “meltdown.”

Spears’ doctors bowed to pressure from her management team and allowed her to participate only under certain conditions, including Trawick’s presence being “mandatory” at all times. They also mandated that prescribed doses of Spears’ medications would be increased if she was working, causing questions about why she needed them in the first place.

More like this
Here’s Everything Coming To & Leaving Netflix In February
By Jake Viswanath
Britney Spears Shared The Real Reason She Shut Down Her Instagram Account
By Brad Witter
Austin Butler Recalls Lisa Marie Presley Showing Him Elvis’ Bedroom
By Jake Viswanath
You’ll Definitely Recognise Isadóra Bjarkardóttir Barney’s Mum
By Maxine Harrison
Get Even More From Bustle — Sign Up For The Newsletter
From hair trends to relationship advice, our daily newsletter has everything you need to sound like a person who’s on TikTok, even if you aren’t.