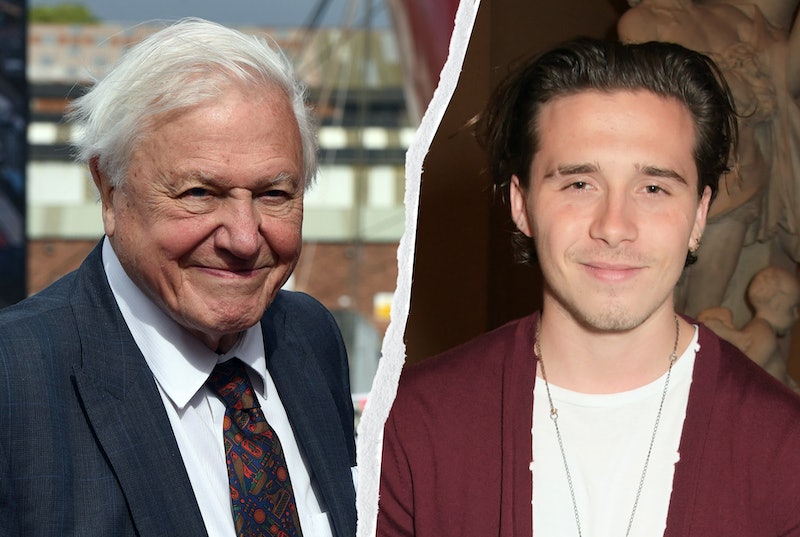 Brooklyn Beckham, the eldest son of Victoria and David Beckham, has taken a giant step in his career by photographing national treasure David Attenborough. The 21 year old was asked by conservation charity WWF UK to take photos of Attenborough while he filmed scenes for his environmental documentary A Life On Our Planet.

The model and photographer took to Instagram to share three portraits of the 94-year-old broadcaster and natural historian. "I am excited to share these photos at last. I was so lucky to be invited by @wwf_uk to join @davidattenborough as he filmed scenes for his new film A Life on Our Planet a while ago.

“Can’t believe I got to photograph him. I was really nervous but he was so relaxed and kind to me a true gentleman. He just loved that we were all there and wants young people to learn more about the planet so we can do what we can to save it. Will never forget this trip. Thank you so much Sir David can’t wait to watch the film.”

There have already been some mixed reviews on the new photos, with some praising the young photographer on instagram. Derek Blasberg, head of fashion and beauty at YouTube, commented "SO MAJOR" and another commenter said "Fantastic photos, well done." Even David Beckham's mother stopped by the comment section to congratulate her grandson. "Amazing man so proud of you as well great experience for you," she said.

Others weren’t so blown away by his work. Twitter users were quick to comment on what they deemed to be nepotism. Back in 2016, he faced similar criticism when he was hired to photograph a Burberry Brit campaign at age 16. Fashion photographer Chris Floyd told the Guardian at the time that Beckham’s employment was “sheer nepotism” and a “devaluation of photography”, something Floyd said was in complete contrast to Beckham’s parents’ careers.

Beckham started a photography degree in New York, which he deferred from to return to the UK. Since then, he’s interned for British photographer Rankin,shot for Vogue Mexico, and released a photography book Brooklyn Beckham: What I See.

This isn’t the first time Attenborough has worked with the young Beckham. As Metro reports, the pair previously worked together on Our Planet filming in Kenya on the Masai Mara game reserve. Attenborough often collaborates with young stars in the name of conservation and education. Earlier this year, he teamed up with rapper Dave for Planet Earth: A Celebration.

A step away from the beautiful wonders of the world which Blue Planet and Planet Earth offered, A Life On Our Planet shows the consequences of the climate crisis that Attenborough has witnessed during his lifetime. Through his 60-year career span, Attenborough has seen and done it all (he's even recently joined Instagram!) and this 80-minute documentary is bleak evidence that, over that time, the planet has destroyed in many tragic ways.

David Attenborough: A Life On Our Planet, will be in cinemas on Sep. 28 and then on Netflix on Oct. 4.