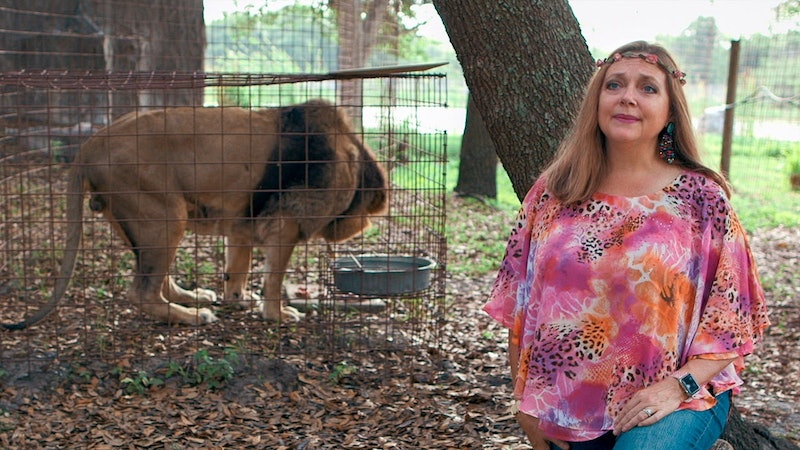 Like everyone who watched Saturday Night Live's first "at-home" episode back in April, Carole Baskin has seen Chloe Fineman's MasterClass sketches, and she's got a few notes. During a recent appearance on The Pet Show podcast, Big Cat Rescue founder Carole Baskin reacted to Chloe Fineman's SNL impression of her, revealing that she now has fans who assume she talks and acts like Fineman's kooky counterpart. "I could just slap that woman!" Baskin joked on the most August 25 episode of the podcast, which is hosted by Dennis Quaid and Jimmy Jellinek.

Still, the animal activist made it clear that she doesn't have a problem with Fineman's impression, but with the fact that fans now want her to quote it in conversation and video. "This whole, 'My kitty, meow, meow, kitty, meow, and then she would just say these really weird words all in a row," Baskin said, referencing one of Fineman's Instagram posts. "That all became popular, I guess, in popular culture and people wanted me to talk like that on the Cameos. And I’m like, ‘I have no idea how to talk like that.' That is not how I speak."

Though she previously showed it off as a "work in progress" on social media, Fineman performed her impression of Baskin for the first time on the April 11 episode of SNL, as part of a sketch parodying celebrity-taught courses on the platform MasterClass. "Hey all you cool cats and kittens, come bike with me," Fineman as Baskin — wearing an animal-print caftan and a flower crown — says in the sketch, referring to the signature way that the Big Cat Rescue founder begins all of her vlogs.

During the clip, Fineman also references the frequent accusations that Baskin was involved in the 1997 disappearance of her former husband, Don Lewis, which was popularized by Joe Exotic in Tiger King. "Where are all the kitties? Good thing I'm not covered in sardine oil," Fineman says at one point, referring to Baskin's claim in the Netflix series that a tiger would eat someone if they were covered in sardine oil; later, she performed a short rap song that ends with her professing multiple times that "I didn't kill my husband." (Baskin has repeatedly denied any involvement in Lewis' disappearance.)

While she didn't mention Fineman's SNL impression as a contributing factor, Baskin did reveal that in the wake of Tiger King, she is often asked by fans to sing — and she's incredibly confused as to why people now consider her a musician. "That’s been the weird thing on Cameo ... so many people want me to sing," Baskin revealed. "And I’m like, “I was not the person pretending to sing in that show. That was somebody else pretending to sing. I didn’t even pretend to sing. I don’t sing.' And yet, that became, 'she sings' and I don’t know how that connection was made."

Despite not being a singer, Baskin did wade into a major musical debate recently, when she criticized Cardi B and Megan Thee Stallion's "WAP" music video for using big cats in some of its scenes. Though she admitted that she was "happy" that the leopards and tigers in question were photoshopped into the video, during an interview with Billboard ,Baskin still stated that the video "glamorizes the idea of rich people having tigers as pets. That makes every ignorant follower want to imitate by doing the same."

"They probably dealt with one of the big cat pimps, who makes a living from beating, shocking and starving cats to make them stand on cue in front of a green screen in a studio," she continued. "That's never good for the cat." Cardi B actually responded to the Tiger King star's criticism, saying she was "not gonna engage with Carole Baskin on that. Like, that’s just ridiculous you know? Oh, Lord. Like, girl you killed your goddamn husband."

More like this
The Black Lotus Staff Has "Had Enough" In The 'White Lotus' Spoof From 'SNL'
By Brad Witter
Michael B. Jordan Tackled His "Public Breakup" With Lori Harvey On 'SNL'
By Brad Witter
Who Is Pete Davidson Dating? He & Chase Sui Wonders Got Caught Kissing
By Jake Viswanath
'The Crown' Season 6 Has Suspended Filming "Out Of Respect" For The Queen's Death
By Bustle Staff
Get Even More From Bustle — Sign Up For The Newsletter
From hair trends to relationship advice, our daily newsletter has everything you need to sound like a person who’s on TikTok, even if you aren’t.