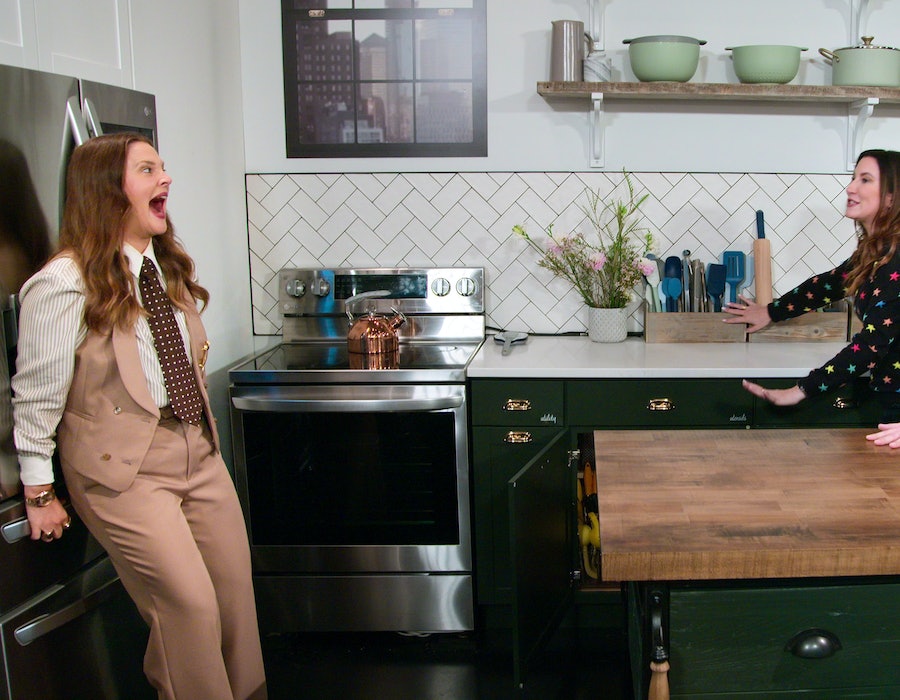 On April 1, Clea Shearer and Joanna Teplin returned to the small screen for the sophomore season of Netflix’s Get Organized with The Home Edit, in which the innovators behind the titular organization company decluttered and styled the interiors of their celebrity clients’ homes. Season 2 lived up to its billing, delivering eight episodes of dramatic renovations. And equally as impressive? This season’s list of celebrity guests.

Barrymore, who appears in Episode 1, is currently the talk show host of her eponymous program, The Drew Barrymore Show, which began airing in 2020, but most viewers will recognize her as one of the Y2K It Girls who dominated the early aughts. To her credit, she’s been a star since she was young, appearing in ’80s classics like E.T. Extraterrestrial and Firestarter. Throughout the ’90s and ’00s, she continued as one of the industry’s top leading ladies, lending her talents to titles like Scream (1996), The Wedding Singer (1998), Charlie’s Angels (2000), 50 First Dates (2005), and Fever Pitch (2005).

Winnie Harlow, who appears in Episode 2, rose to prominence in 2014 as a contestant on America’s Next Top Model’s twenty-first season. Eight years later, Harlow is one of the most sought-after models in the fashion industry, whose stacked CV stretches beyond the runway to spheres like entrepreneurship and activism. Recently she launched a skincare line, Cay Skin, inspired by a photo shoot in the Bahamas, during which Harlow stressed the importance of sunscreen.

The former funny guy from Parks and Recreation rocketed to superstardom in the middle of the 2010s as the lead in the Marvel film Guardians of the Galaxy (2014), which he followed with Jurassic World (2015) a year later. He’s also leant vocal talents to The Lego Movie franchise and Pixar’s Onward (2020). He appears on The Home Edit in Episode 3 alongside his partner Katherine Schwarzenegger.

Lauren Conrad, who appears in Episode 4, is an icon of the mid-aughts, thanks in large part to MTV’s The Hills. She opted not to return to the show’s 2019 reboot, and instead launched a brief, successful podcast: Lauren Conrad: Asking For A Friend. Outside of the entertainment industry, Conrad has carved out a small empire for herself as a designer, author, and lifestyle expert.

Country singer Kelsea Ballerini — “This Feeling,” anyone? — who also appears in Episode 4, is slated to host the CMT Music Awards on April 11. The Tennessee native has become a mainstay on the awards circuit, having earned multiple nods at the CMT and Grammy Awards.

Danielle Brooks started off 2022 as a lead on HBO Max’s superhero series Peacemaker, and she’s slated to play Sofia in an upcoming adaptation of The Color Purple, set to debut in 2023. Many fans know Brooks, who appears in Episode 5, from her career-making turn as Tasha "Taystee" Jefferson on Netflix’s Orange Is The New Black.

Appearing in Episode 6, Tyler Hubbard is one half of the country music duo Florida Georgia Line (alongside bandmate Brian Kelley). The Nashville-based act boasts several Billboard Music and Country Music awards, and have racked up their fair share of Grammy nominations. On Spotify, they’ve earned more than 11 million monthly listeners.

The youngest member of the list is Topper Guild, in Episode 7. The social media star boasts upwards of 25 million followers on TikTok, with more than 800 million views. Much of his content focuses on outrageous food-based videos, making kitchen organization paramount.

More like this
Everything To Know About A Potential 'Bling Empire: New York' Season 2
By Gretchen Smail
Everything To Know About 'Selling The OC' Season 2
By Brad Witter
'Love Is Blind: After The Altar' Season 3 Has A Release Date & It's Very Soon
By Grace Wehniainen
Love Is Blind’s Natalie Claims Shayne Signed Up For 'Perfect Match' While They Were “Still Together”
By Brad Witter
Get Even More From Bustle — Sign Up For The Newsletter
From hair trends to relationship advice, our daily newsletter has everything you need to sound like a person who’s on TikTok, even if you aren’t.