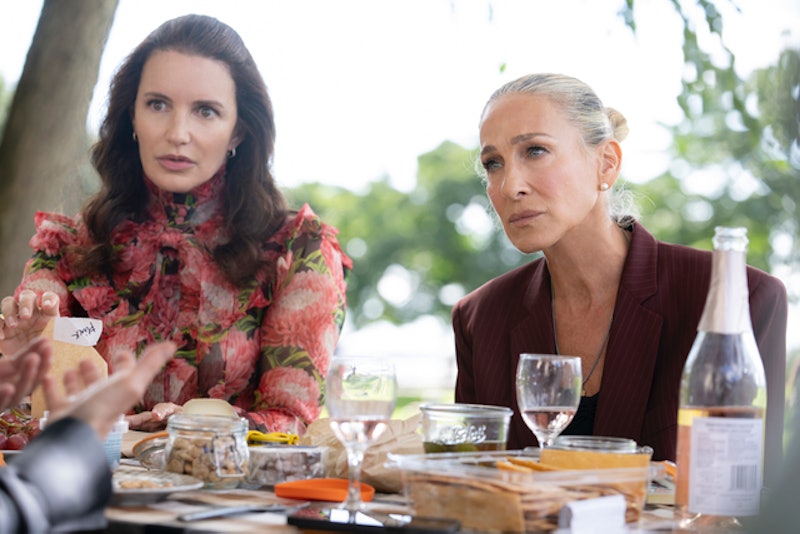 Carrie Bradshaw is reeling. In the sixth episode of And Just Like That, she moves into a new apartment she’s not sure she wants, contemplates plastic surgery, and subsequently moves out of the new apartment, which I guess makes it her old apartment. Her choices are chaotic but understandable; Big’s death is a catastrophic trauma that affects every component of her life. What’s less reasonable is how her widowhood has begun to warp her friendships. I’m hardly the first to point out that Carrie can be a bad friend, but is it possible that, with age and experience, she’s actually getting worse?

My suspicion started creeping in even before we could begin crediting at least some of Carrie’s behavior to grief. There’s something about her falling out with Samantha that doesn’t add up. Would Samantha really trash three lifelong friendships over losing a C-list client? (No offense, Carrie, but she reps sheiks and the movie star Smith Jerrod.) It’s easier to fathom that there’s some part of the estrangement Carrie simply doesn’t understand.

Last week, when Carrie overheard Miranda having sex with Che in her apartment while recuperating from hip surgery, my concerns were confirmed. Rather than approach her friend with empathy, she started from a place of personal outrage and reproach. How dare Miranda give into a moment of temptation when she’s supposed to be Carrie’s private nurse? Sure, it’s not the best look for Miranda, but if I witnessed my best friend beginning an affair with my boss 20 feet from my sickbed, I think I’d at least start with some questions: Are you thinking about a divorce? How long have you been feeling this way? How was the sex on a scale from one to 10?

Carrie was feeling especially vulnerable then; perhaps her judgment was clouded by pain or painkillers. But no matter how much time passes, she still seems inescapably mired in her own point of view. When Miranda innocently jokes she’s replaced alcohol with masturbation, for example, Carrie forces her into an awkward apology. How could she mention horniness in the presence of a widow? Carrie’s sensitivity isn’t unwarranted, but there’s no filter between how she feels and what she says. Rather than be generous with Miranda — a person who has been as supportive and available as a friend can be during Carrie’s mourning — she makes a point of reminding her about the line she crossed again and again.

It only gets worse from there. When Miranda makes the decision to tell Charlotte about Che, Carrie achieves new levels of egomania. She muses aloud that she wishes the non-alcoholic sparkling beverage they’ve been enjoying was the real thing — a joke that’s simply not funny enough to justify undercutting Miranda’s progress toward sobriety. You know who else probably wishes the water was wine? Miranda! The person who’s currently being picked apart by her dearest friends.

It’s not only that Carrie disapproves of Miranda’s conduct — it’s that she refuses to acknowledge that what Miranda’s experiencing is important. She’s on the verge of ending her marriage and completely remaking her life, but to Carrie, it’s not worth getting emotional about because it’s not on the same level as her own personal tragedy. “Big dying is something,” she says dismissively. “This is…I don’t know what this is.” When Miranda wants to leave the conversation, that’s not allowed either. “People are gone in a second,” Carrie says, guilting her back to the table. It works, and Charlotte apologizes for her hasty judgments, but it’s still manipulative.

I don’t want to be insensitive to Carrie. I love Carrie. If my husband dies before me, I’m sure I’ll be myopic about it, too. And then, eventually, I’ll remember that I’m not the first person to have ever experienced loss. What happened to Big is awful, but it doesn’t mean Miranda can shelve her identity crisis until Carrie feels better, nor does it discount what Charlotte or Anthony are going through. Being a widow has left Carrie with a sense of life’s preciousness but no humility. I hope before the season is over, she can stop playing the heartbreak olympics and instead see the truth: regardless of its severity, her friends’ pain is as important as her own simply because it’s important to them.

More like this
'The Last Of Us' Episode Schedule Competes With The Super Bowl & Oscars
By Brad Witter
Linda Ronstadt’s “Long Long Time” Plays A Pivotal Role In The Last Of Us
By Brad Witter
Everything To Know About 'And Just Like That...' Season 2
By Jack Irvin and Grace Wehniainen
Melanie Lynskey Plays A “Ruthless Leader” In 'The Last Of Us'
By Brad Witter
Get Even More From Bustle — Sign Up For The Newsletter
From hair trends to relationship advice, our daily newsletter has everything you need to sound like a person who’s on TikTok, even if you aren’t.