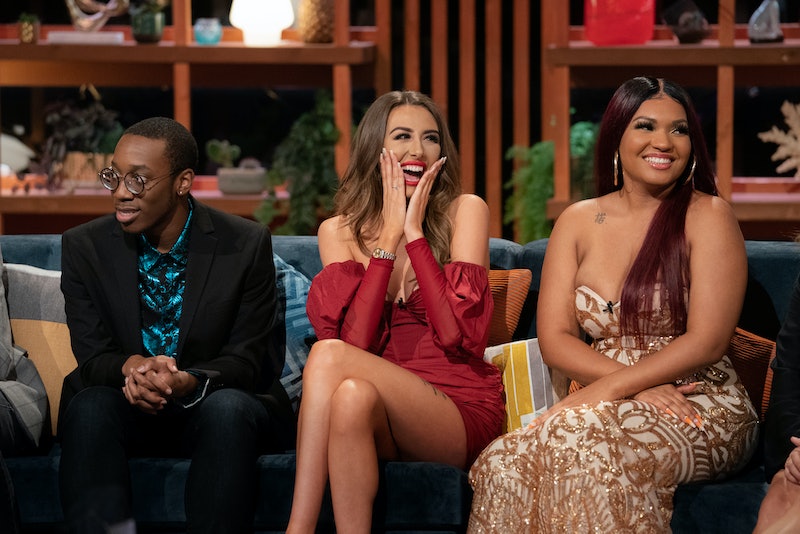 When Chloe Veitch found out the man she’d been flirting with in The Circle was a catfish, she blamed herself for not realizing sooner. “I was really gutted, to be honest with you,” she tells Bustle. “I thought, ‘Oh, I'm stupid, I’m naive.” She’s talking about the character of Trevor, who was actually played by his real-life wife DeLeesa. But what Chloe didn’t end up finding with Trevor she may have found with fellow contestant Mitchell Eason, with whom she also felt a bit of a connection. Unlike DeLeesa’s Trevor, Mitchell is a real person, and Chloe was thrilled to see him at the finale — she says the two even shared a kiss that Netflix didn’t show. Now, months after filming has ended, Chloe and Mitchell are continuing to talk and seem to be making a real go at having a long-distance relationship.

“We are talking like every other day; we do FaceTime, phone calls, [and] I'm actually going out to America to see him next month,” Chloe says. She doesn’t know where things will go, but she is looking forward to seeing him again, and maybe even meeting his mom. “His mum said that I’ve got her approval,” Chloe happily reports.

As fans saw on The Circle, Mitchell has a great sense of humor, a real genuine side, and... he looks amazing shirtless. But what Chloe likes most about him is how he makes her feel. “When we talk, he lifts me up... He makes me feel so good about myself,” she says. It’s the same feeling she got from being on The Circle as the only woman to make it to finale night playing herself. She says that she always intended to go on the show as herself, even when Netflix gave her the option to be a catfish. So it meant that much more that people kept giving her high ratings and naming her as the game’s Influencer.

Chloe is used to being an influencer on Instagram with her 1.6 million followers, but that’s not real enough for her anymore. “Instagram is such a fake place where you post a photo, but no one knows what goes on behind the photo. [On] The Circle, me being myself, like burping on camera and sweeping the rubbish under the rug and all of that — that is me,” she says. “So I think when I was talking to these people and I was being my genuine self and I came in second [place]... every time I got voted Influencer, I was just so overwhelmed. I was like, I am enough. They like me.”

Fan reactions to her authenticity on screen have encouraged her to start living more authentically on Instagram, too. “I want to strip back this sexy, underwear and bikini shots for Insta [girl], and I just want to be real,” she says. “That’s what the people want.”

Perhaps being catfished also helped Chloe come to this conclusion, because no one likes being lied to — even if it is a game. Chloe admits that she was “hurt” that Trevor wasn’t who she thought he was, but she wasn’t mad that DeLeesa fooled her and eventually won the game. “She well deserved it, she played such a hard game. She came in as her husband, she was doing it for her baby girl, and watching it back actually reduced me to tears,” Chloe admits. “If it was anyone else, I’d be a bit bummed about not winning, but I feel like DeLeesa, she really deserved to win. If it weren’t me, then it definitely should have been her.”

Today, there are no hard feelings between the two, and Chloe says they keep in touch as she does with the rest of the Circle contestants from her season. And perhaps it was for the best that Trevor wasn’t real, because it allowed Mitchell’s “bro code” promise not to flirt with Chloe to go out the window. “Everything happens for a reason,” she says, adding that she can’t wait to see Mitchell again. “He says that he's going to wait for me to get there and we can start a little journey together,” she says. “When I see him, I’m sure he’ll give me a big cuddle.”