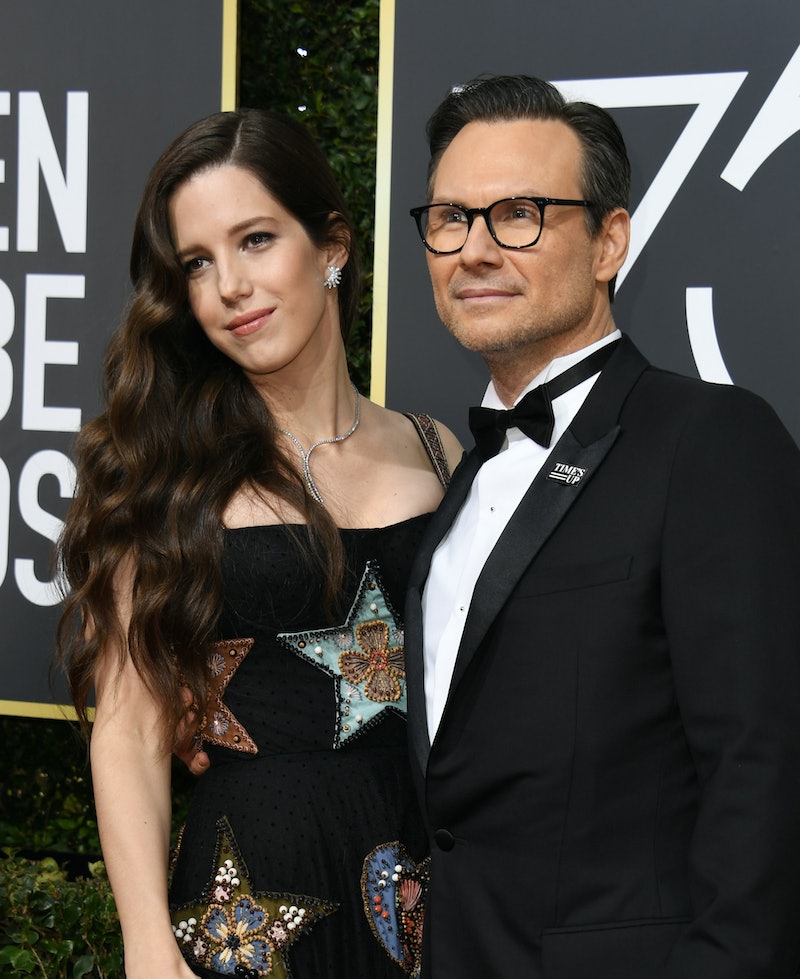 It’s been two years since Mr. Robot went off the air after four seasons, but Christian Slater still haunts. How could he not? After playing the titular insurrectionist, he then went on to do multiple true crime shows, including Dr. Death, the true crime-inspired podcast Killing Hollywood: The Cotton Club Murder, and USA Network’s Dirty John: The Betty Broderick Story in 2020, where he plays opposite Amanda Peet in bringing to life the infamous murder story.

While he's starred in a toxic and deadly relationship onscreen, his real-life romance couldn't be more different. With rare but sweet social media posts about his wife to comments about his two-year-old daughter, here’s everything to know about Slater’s wife, Brittany Lopez, and their love story.

Lopez met Slater on vacation in Florida’s Little Palm Island in 2009 when she was 21 and he was 39. In a February 2013 interview with Jimmy Fallon, Slater detailed their funny introduction after the host revealed the couple’s engagement.

“So I’m a filthy old man eating my oatmeal, and she comes walking along,” Slater, now 51, said, recalling that he was in a “very, very nice” spot “famous” for proposals. He then detailed how his now-wife “gets down on one knee and proposes to this older lady,” adding, “I thought I’d just witnessed a nice lesbian engagement, so I was coming over to say congratulations.” He severely misjudged the moment, though, as Lopez was just taking photos of her aunt on vacation. Luckily, the mishap didn’t cause too much embarrassment. “The next thing I knew, we were hanging out in the Everglades,” he said.

In the same interview, he also revealed how he once gave Lopez a taxidermied raccoon as a gift in lieu of the live pet she wanted. “She opened the thing and all she saw was two dead eyes staring up at her and she literally cried for 45 minutes into her mother's bosom,” he said of the incident, adding, “It was awful."

Luckily, the raccoon incident didn’t put a dent in their relationship as Slater and Lopez then dated for a few years before marrying in December 2013 at a Miami courthouse. According to People, they were going to get their marriage license and just decided to tie the knot right then and there. Pretty spontaneous and romantic.

That wasn’t their only wedding, it seems. A few days later, on Christmas Day, the couple had an intimate wedding in snowy Illinois, “that way not everybody can come,” the actor revealed when he was a guest host on Live! with Kelly. “I was very, very happy there,” he gushed when co-host Kelly Ripa showed the picturesque snap of the couple sharing a kiss. Slater also revealed that he “picked the dress” because he wanted that “mermaid-y thing,” adding, “I got into it. She tried on some things. We did a whole fitting.” Great eye. In 2017, Slater posted the same photo on Instagram and wrote a sweet caption saying, “We were married four years ago today and I've cherished every moment since.”

In August 2019, the couple welcomed daughter Lena, their first child together after almost six years of marriage. Slater shares two kids with his first wife, journalist Ryan Haddon. Their son, Jaden Christopher, is 22, and their daughter, Eliana, is 19.

More like this
Who Is 'Umbrella Academy' Star Elliot Page Dating After His Divorce?
By Jake Viswanath
Bachelor Nation's Blake Horstmann Is Dating 'Love Is Blind' Star Giannina Gibelli
By Jake Viswanath and Radhika Menon
‘The Bachelorette’s Michelle Young & Nayte Olukoya Explained Their Breakup
By Stephanie Topacio Long
‘RHOBH’ Star Sutton Stracke’s Ex-Husband Helped Her Get Very Rich
By Brad Witter
Get Even More From Bustle — Sign Up For The Newsletter