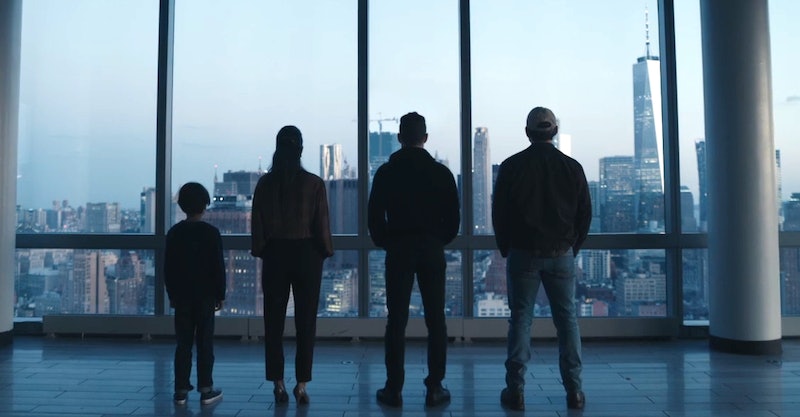 Spoilers ahead for the final season of Mr. Robot. Elliot's identity was always a major theme of Mr. Robot, but who Elliot Alderson is turned out to be the entire point of the show. The Mr. Robot series ending revealed that the Elliot viewers knew was an identity of Elliot's known as "the mastermind." To keep the real Elliot safe while he saved the world, this identity had locked Elliot away in a fake, perfect reality. The mastermind had become so in control, he himself forgot he was an element of Elliot's dissociative identity disorder. But clues about the mastermind have existed within Mr. Robot since Episode 1.

The Mr. Robot finale practically demands the audience rewatch the entire series for hints about "the other one." In the first episode, "eps1.0_hellofriend.mov," the mastermind addressed his imaginary friends as he adjusted to his new role in the driver's seat. Just three episodes later, the show cemented that this Elliot was not the real Elliot. Clips from past episodes were sprinkled throughout the series finale, demonstrating that the ending was all part of Sam Esmail's master plan. So here's your hacking guide to some of the Mr. Robot episodes that teased the truth about Elliot's identity.

The finale heavily directly referenced this episode (and even featured the same actor who had been the young girl in the Season 1 episode). In the original withdrawal hallucination, Angela in a wedding dress challenged Elliot in a tuxedo and hoodie. "You're not gonna do it, are you? Change the world. Figures. You were only born a month ago," Angela said. "Isn't it obvious? You're not Elliot. You're the—"

For the finale, Elliot was brought back to this Fun Society arcade scene, complete with the song "Queen" by Perfume Genius playing. Angela's words had been cut off before, but in the finale she stated, "Isn't it obvious? He tried to tell you. You're not Elliot. You're the mastermind" — indicating from almost the get-go that the mastermind was Elliot's newly created identity, fixated on saving the world from E Corp.

Multiple scenes from this episode are also dropped in the finale, like when Angela confronted Elliot on the street. "Something is going on with you Elliot, you have not been the same the last couple of months," Angela said. Angela's comments made sense since he was keeping fsociety a secret from her, but it went deeper than that. "You don't talk to me anymore," she said. "It's so strange. I really miss us."

Later, Elliot remembered Darlene was his sister after he tried to kiss her. "Oh, my god, Elliot. Did you forget again?" Darlene asked him. The mastermind couldn't believe he forgot Darlene and when he got to his apartment, he faced a mirror where multiple Elliots were shown. He proclaimed, "See me, Elliot Alderson. I am here" before punching the mirror. Perhaps this was a moment where the violent mastermind was asserting his dominance after the two closest people in Elliot's life spotted him as a fake.

After the 5/9 hack was successful, the mastermind was faced with his other fellow family identities in Times Square. "You're not real," Elliot said, to which Mr. Robot replied, "And what? You are?"

Elliot proclaimed he wanted to be alone, just like he did on the last subway ride with Mr. Robot in the finale. But the younger Elliot personality highlighted how entangled the mastermind was with the identity family unit — another scene featured in the last episode. "We're deep down inside of you, Elliot. You can't leave us and we can't leave you," the young Elliot said, a hint that Elliot had more identities than solely Mr. Robot.

The beginning flashback of this episode just may be one of the times the audience saw the real Elliot. Darlene returned to the city and after watching The Careful Massacre of the Bourgeoisie with her brother, the rumblings of fsociety begin. But Elliot was milder in this scene, especially when he told Darlene how he had blacked out and destroyed the servers at his old work. He didn't remember this rage-fueled moment, but it was what forced him to go to therapy for his anger and could have been the first appearance of the mastermind.

In Elliot's '80s sitcom reality, he feared that Mr. Robot had taken over him. Yet, as the mastermind did for real Elliot, it seems that Mr. Robot created this world (complete with Alf) to allow the mastermind time to recover after he suffered a beating by Ray's lackeys. At the time, it seemed like a clue that Elliot was in prison. But through the mastermind's line, "This whole place is a lie, nothing here is true," it mirrored what the real Elliot was experiencing in the prison reality.

On the subway, Angela asked Elliot about a time she found him suffering a mental break in the Queens Museum — something Elliot couldn't recall. "You were pacing and screaming at the staff because they couldn't see whoever you said you were seeing. Was it your dad then too or was it someone else?" And Angela was absolutely right to bring up the possibility of Elliot having additional identities.

Another episode that was featured in the finale was the Season 2 finale. Elliot couldn't remember the plan Tyrell claimed he had come up with. "They all think it's me. They all think I'm the ringleader. The one in charge. And I have no idea what it is," Elliot said. "I could ask him, but who am I really asking?" Perhaps this was another rare case of the real Elliot coming out. But the episode seemed to end on the mastermind when he declared, "I am the only one that exists. It's time to finally take back control." Tyrell then shot him, which came full circle in the finale when Tyrell shot the mastermind in the prison reality on the Coney Island boardwalk.

"I know I am doing the right thing. ... Then, what is this? Why do I feel this empty void inside?" Elliot wondered at the beginning of this episode. While he could have been having doubts about doing Stage 2 or missing Mr. Robot, the void most likely was the mastermind feeling the pang of regret for imprisoning his true self. Elliot also claimed to Krista that Darlene was a trigger for Mr. Robot, without knowing that Darlene was truly a trigger for the real Elliot. But Mr. Robot realized it when he intercepted Elliot's therapy session and told Krista that Darlene had "compromised" them.

Darlene was captured by the Dark Army and Elliot was having regrets. "I brought this on myself ... This is on me," he said as he looked into the funhouse mirror at Fun Society. Perhaps the mastermind was subconsciously acknowledging how he was the one responsible for putting Darlene in danger, not Elliot. And in order to save Darlene, he agreed to work again with Mr. Robot again since the four identities are supposed to be a team.

Elliot's mom definitively revealed that there was "the other one" in the final moments of this episode, launching a whole new set of finale theories.

Mr. Robot met with the other personalities to discuss the out-of-hand situation with the mastermind. The mother identity was concerned for the real Elliot, but Mr. Robot told her that Darlene might have the ability to wake him — and thankfully, it was Elliot's sister who helped the mastermind realize he needed to relinquish control.

Although they were very misguided, Elliot's personalities only wanted to protect him in the end. But no matter which Mr. Robot episodes you choose to rewatch following the finale, go into it knowing you never really knew your friend Elliot Alderson at all.