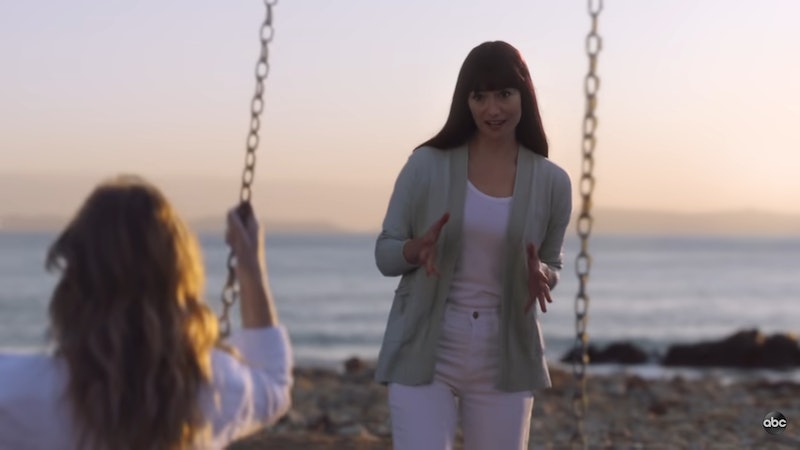 Spoilers ahead for Grey’s Anatomy Season 17. So after Meredith’s emotional wedding with Derek on her ominous yet cute death beach, the beloved surgeon seems to be on the mend and even got to share a tear-jerker of a hug with Zola. But alas, the sunset-colored shadow of the Malibu shore lives on — especially since we’re still not certain if Meredith (and the show) will survive beyond Season 17. Whatever happens, though, the beach will go down as one of the most memorable backdrops on Grey’s, thanks to the return of Derek, George, Mark, and, of course, Little Grey herself. Lexie came at just the right time to give Meredith some sage advice about the meaning of life — “don’t waste it, Meredith” — and to push her big sister on a swingset and hang out in a coastal meadow together. Just Grey’s things.

By the time Lexie’s return aired, viewers knew that Chyler Leigh was not able to be physically present at the beach — COVID travel restrictions kept her in Canada, where she works on Supergirl. However, aside from some general idea of green-screen magic, no one knew the exact mechanics of how her return came to be until now. In an interview with Entertainment Tonight, Leigh revealed the surprising setup for filming her guest spot. Spoiler alert: The emotional punch of the reunion belies a much more awkward reality behind the scenes. “We're not sitting on the rocks,” she said of Lexie and Meredith’s first heart-to-heart moment in the episode. “I was sitting on an apple box, and I was talking to tennis balls. So in that sense, it was interesting.”

That visual certainly puts the scene in a new light. But tennis balls or not, Leigh’s performance was powerful and rewarding. The actor herself felt so, too. “To be able to close the chapter for Lexie and to appear in a way where she's not eaten by wolves,” she began. “Kind of bring a little life back to it... It was a special experience to be able to be part of that.”

While Leigh’s physical absence meant a lack of fun behind-the-scenes candids, like Ellen Pompeo and Eric Dane’s epic beach selfie moment, it was not a total case of FOMO for Leigh, who’s been busy in Canada. The Supergirl star recently made her directorial debut on the show with the May 4 episode “Prom Again!” Back in December, as filming took place, Leigh took to Instagram to celebrate the milestone achievement. “My directorial debut on the show that’s changed my life for the better,” she wrote. “Such an honor.”

Leigh’s glowing return to Grey’s did give viewers a second chance to say goodbye to Lexie — this time, with a lot less sobbing and screaming — but it remains to be seen if this is the end for Meredith and the rest of the show should Season 17 actually be the last. Four episodes remain this season, so it won’t be long before Grey’s fans find out.

More like this
'GoT' Star Emilia Clarke Says She "Just Can't" Watch 'House Of The Dragon'
By Brad Witter
'RHOP' Stars Robyn & Juan Reportedly Got Remarried & Filmed The Ceremony
By Brad Witter
Brianna Revealed Why 'The Bachelor' Premiere Was Tougher For Her Than You Saw On TV
By Brad Witter
Netflix Shut Down 'Bridgerton' S3 Rumours About A “Very Dark” Storyline
By Bustle
Get Even More From Bustle — Sign Up For The Newsletter
From hair trends to relationship advice, our daily newsletter has everything you need to sound like a person who’s on TikTok, even if you aren’t.