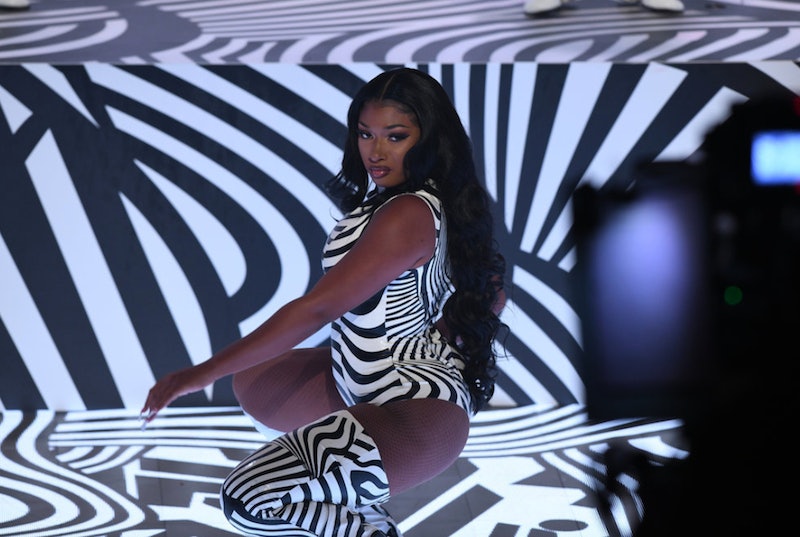 Megan Thee Stallion’s powerful performance of "Savage" on Saturday Night Live received a ton of praise over the weekend for its homage to the late Breonna Taylor, but not everyone is thrilled about her message. Kentucky Attorney General Daniel Cameron responded to Megan Thee Stallion’s SNL performance on Tuesday, Oct. 6, specifically taking offense at her calling him out. According to Cameron, the whole thing was evidence of a leftist “mob mentality” and “intolerance.”

Meg performed “Savage” on the Studio 8H stage on Saturday against a backdrop declaring "Protect Black Women," and, towards the end of the song, interspersed soundbites from activists Malcolm X and Tamika Mallory into the performance. Mallory’s audio in particular declared that Cameron, who failed to bring charges against the offers complicit in Taylor's death, "is no different than the sellout Negroes that sold our people into slavery."

Cameron did not take kindly to this being aired on national television, calling the performance "disgusting" during an appearance on Fox & Friends. “Let me just say that I agree that we need to love and protect our Black women,” Cameron said. "There’s no question about that, but the fact that someone would get on national television and make disparaging comments about me because I’m simply trying to do my job is disgusting."

"The fact that a celebrity that I never met before wants to make those sorts of statements, they don’t hurt me," he insisted. "But what it does is it exposes… intolerance and hypocrisy." He added, "You hear a lot of that from the left about being tolerant, but what you saw there is inconsistent with tolerance. In fact, it’s her disposing intolerance because I’ve decided to stand up for truth and justice."

An EMT for the city of Louisville, Taylor was shot multiple times in her home by plainclothes officers in March who were in possession of a no-knock warrant and entered her home late at night, when she and her boyfriend were asleep. Last month, a grand jury in Jefferson County, Kentucky voted to indict just one officer, Brett Hankison, not in relation of Taylor's death, but for “wanton endangerment" regarding shots fired that entered into a neighboring apartment. The decision further fueled the nationwide protests sparked by police brutality, with public figures and celebrities alike continuing to demand justice for Taylor and her family.

More like this
Michael B. Jordan Tackled His "Public Breakup" With Lori Harvey On 'SNL'
By Brad Witter
Who Is Pete Davidson Dating? He & Chase Sui Wonders Got Caught Kissing
By Jake Viswanath
The Black Lotus Staff Has "Had Enough" In The 'White Lotus' Spoof From 'SNL'
By Brad Witter
Linda Ronstadt’s “Long Long Time” Plays A Pivotal Role In The Last Of Us
By Brad Witter
Get Even More From Bustle — Sign Up For The Newsletter
From hair trends to relationship advice, our daily newsletter has everything you need to sound like a person who’s on TikTok, even if you aren’t.