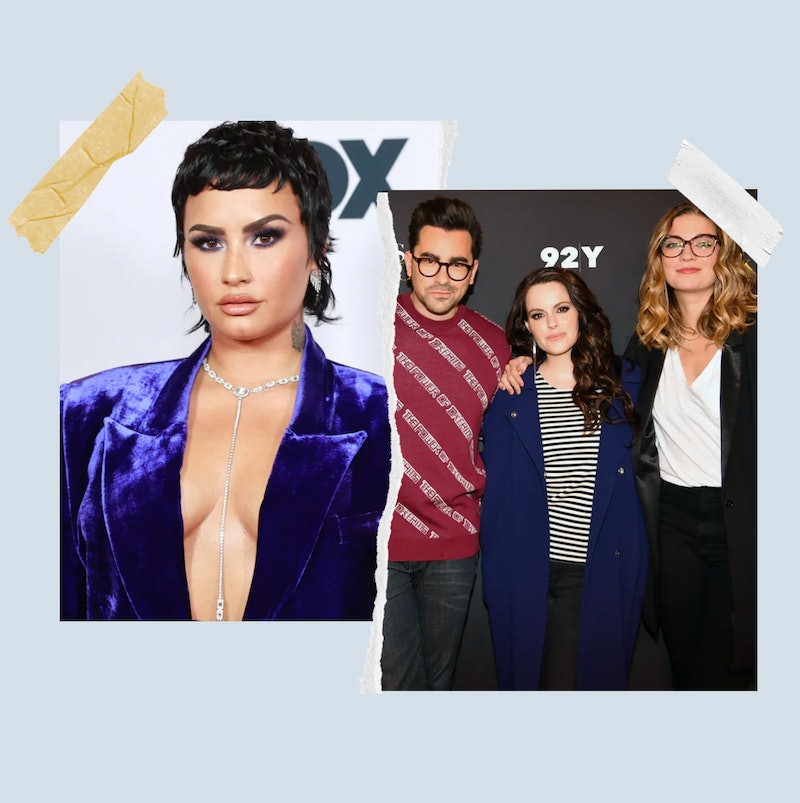 Demi Lovato isn’t letting an age gap stop them from shooting their shot. During a recent episode of the 4D With Demi Lovato podcast, Schitt’s Creek star Emily Hampshire revealed that the singer privately messaged her a while ago to ask her out on a date. “You slid in my DMs and you said, ‘Hey girl, I like you on the show. We should kick it sometime,’” the 40-year-old actor recalled. “And then you said below it, ‘And by kick it, I mean go on a date. I find you attractive.’”

Hampshire said that Lovato “made it clear that it was a date,” which she appreciated. “I loved that because I was like, ‘Sometimes that’s confusing.’ I’m decades older than you, so ‘kick it,’ I was looking it up,” she admitted. The 29-year-old “Dancing With the Devil” singer could tell that their age difference was an issue for the Schitt’s Creek star, who played Stevie Budd on all six seasons. “You were like, ‘I’m decades older, I don’t think we’ll find the same things funny,’” Lovato said. “I was like, ‘Mmm excuse you’ and I sent you a really good meme.”

If the meme didn’t make Hampshire laugh, Lovato’s next message certainly did. “You also said, ‘Think of Sarah Paulson and Holland Taylor.’ And then right after you were like, ‘I don’t mean you’re the Holland Taylor!” Paulson, 46, has been in a relationship with Taylor, 78, since 2015 and they are still going strong six years later. “I thought it was the funniest thing in the whole world because I was a Holland Taylor in that situation,” Hampshire said. “Proud to be.”

Despite Lovato’s best efforts, they were never quite able to land a date with Hampshire. “A non-binary person can dream,” they said, adding that they were “dreaming big.” Lovato came out to the public as non-binary on their podcast in May. “Today is a day I’m so happy to share more of my life with you all,” they wrote on Instagram at the time. “I am proud to let you know that I identify as non-binary and will officially be changing my pronouns to they/them moving forward.” Hampshire, for her part, came out as pansexual on Instagram in 2019.

Although their DM conversation never amounted to a romantic relationship, both stars are grateful for the amazing friendship they’ve developed. “I was like, ‘What’s the worst that could happen?’ Lovato said, recalling the moment they decided to shoot their shot. “And I made a really good friend. You’re a dope friend, and I’m happy we became friends after that.” Hampshire agreed, citing their 11-year age gap as the primary reason things didn’t work out. “I wish you weren’t 29!” she said.

Despite their age difference, Lovato admitted that they still admire Hampshire and find her attractive. “You are an attractive woman who knows her shit,” they said. “You’re not afraid to be yourself and I think that’s f*cking dope.” The pop star also said that they’re “single as a Pringle right now” following their split from fiancé Max Ehrich in 2020. Hampshire is also enjoying the single life after calling off her engagement with musician Teddy Geiger in 2019.

“I went through a difficult breakup and it kind of forced me to really go to therapy and look at myself,” she said, explaining that she lost her sense of self. Finally, after lots of “expensive, expensive therapy,” the actor found herself again. “I’ve gotten to a place where I love me so much and doing what I want to do that I’m scared to get into a relationship,” she admitted. Lovato can totally relate. “I really love my Grey’s Anatomy marathons that I have by myself. I don’t know if someone who I date is going to be interested in that,” they said. “I don’t want to ever sacrifice who I am for the expense of being in a relationship with someone else.”

More like this
What Demi Lovato Really Thinks About Child Stardom, Depression, & Sobriety
By Radhika Menon
How Much Are The 'Schitt’s Creek' Stars Worth?
By Hugh McIntyre
Who Is Nick Cannon Dating & How Many Kids Does He Have?
By Jordyn Tilchen and Radhika Menon
Rhys Ifans Has A Good Reason For Keeping His Love Life On The DL
By Maxine Harrison
Get Even More From Bustle — Sign Up For The Newsletter