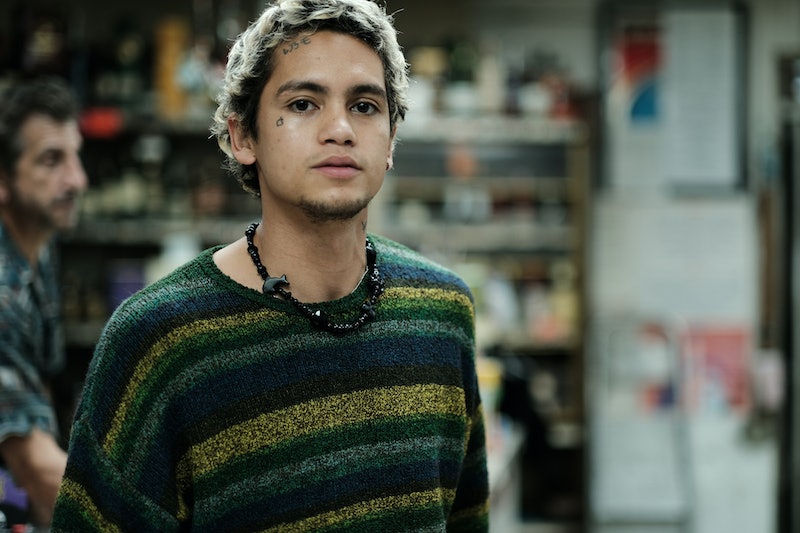 Spoilers ahead for the Season 2 finale of Euphoria.

Dominic Fike joined the cast of HBO’s Euphoria for Season 2 as Elliot, a character who befriends Rue (Zendaya) after bonding over drugs at a New Year’s Eve party in the Season 2 premiere episode and eventually grows close to her on-again, off-again girlfriend, Jules (Hunter Schafer). Known mainly as a singer-songwriter with hits including 2018’s “3 Nights,” Fike’s role on the series marks his first foray into acting. But he got to show off his singing skills on screen in the Season 2 finale, which aired Feb. 27, when Elliot serenaded Rue with an original song written by Labrinth and Zendaya, set to be officially released this week.

Throughout Season 2, Elliot’s relationships with Rue and Jules have both proven complicated and turned semi-romantic. Episode 4 marked a major turning point for the characters, as Elliot told Jules he’d been doing drugs with Rue, who’d recently relapsed. The following episode saw Jules tell Rue’s mother, Leslie (Nika King), about her daughter’s drug use and attempt to hold an intervention with Elliot at the family’s home. After finding out Elliot was part of the reason her relapse had been exposed, Rue hit him in the head and dismissed him before driving away with her mother.

The Season 2 finale opens at Lexi’s (Maude Apatow) explosive school play written about her classmates, aka Euphoria’s core characters. Rue spots Elliot in the crowd and informs the series’ viewers, via voiceover narration, that she’d stopped by his house a few days earlier to chat about the intervention’s aftermath. Flashing back to their meeting, Rue jokingly tells Elliot to “go f*ck himself” before admitting his actions might’ve saved her life. She forgives him for telling Jules about the drugs and says she’s been sober, to which Elliot replies by asking if he can play her a song he wrote. Rue obliges, and Elliot plays the acoustic guitar while singing lyrics seemingly about his feelings toward their friendship and enabling her drug use.

“Us against the world, just a couple sinners making fun of hell. If I keep you here, I’ll only be doing this for myself,” Elliot’s lyrics continue. “Been some time since we’ve spoken, one day we’ll meet again. Some distance when you’re older, you’ll come lean on my shoulder, tell me that story’s over, that day we meet again.”

After he finishes singing the song, Elliot asks Rue if she thinks they’ll still be friends going forward. She reminds him he’s the one who said they weren’t good for each other, Elliot says he still feels that way, and the scene ends.

According to Variety, Columbia Records has confirmed “Elliot’s Song” will be released to streaming services on March 4. In an HBO behind-the-scenes video, Euphoria composer Labrinth said the song came out of a casual collaboration with Zendaya, who often visited him in his studio on the Euphoria lot. The two decided that Elliot should play a song for Rue that alludes to his feelings about their complicated friendship. Then they pitched it to Fike.

“He just came up to me and was like, ‘Yo, I was thinking, you play the guitar in this and you sing a song,’” Fike explains in the video. Fike then joined the two in the studio contributed his own guitar parts.

Labrinth, for his part, clearly enjoys working with anyone musically inclined on set. “The cast aren’t just acting — they’re part of the music now, and I think that makes it more special,” he says in the video.

While some viewers took to social media to share their love for “Elliot’s Song,” others criticized the series for spending time on his performance and felt there were more pressing storylines to address.

More like this
An Ultimate Guide To The Music Of 'Rap Sh!t'
By Brad Witter
The 'PLL: Original Sin' Creators Say A’s Identity Will Be “Very Clear” By The Season Finale
By Alyssa Lapid
HSMTMTS Season 3 Will Give Olivia Rodrigo’s Nini A “Proper Sendoff”
By Brad Witter
Every Horror Movie Reference In The 'PLL: Original Sin' Premiere
By Alyssa Lapid
Get Even More From Bustle — Sign Up For The Newsletter

This article was originally published on Feb. 28, 2022