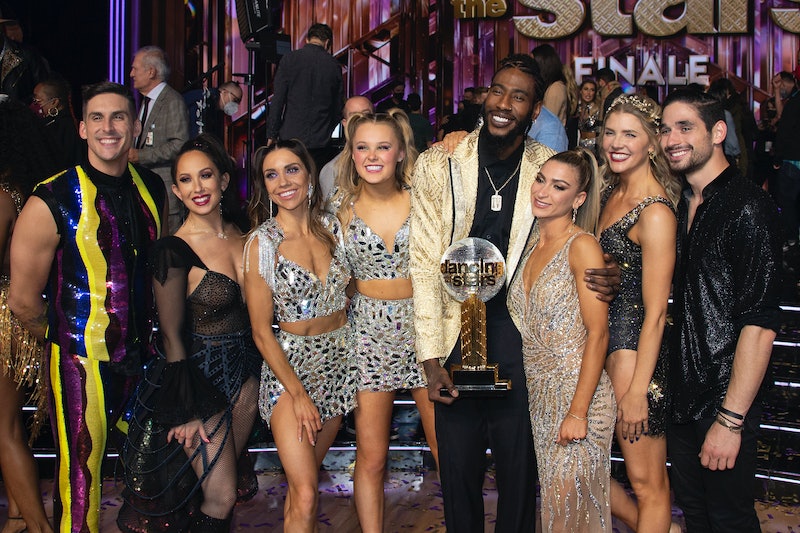 The Mirrorball Trophy has been claimed once again. Dancing with the Stars Season 30 crowned a winner during the Nov. 22 finale, which featured JoJo Siwa, Iman Shumpert, Cody Rigsby, and Amanda Kloots competing against each other one last time. Siwa was a frontrunner early on after delivering impressive routines from the jump, while Peloton instructor Rigsby has remained week after week thanks to the strength of his fanbase, making them both competitive for the win. But in the end, it was NBA player and Twitter fan favorite Shumpert who emerged triumphant.

While it would’ve been historic to see Siwa and partner Jenna Johnson win as the show’s first ever same-sex pairing, Shumpert’s win is historically significant in its own right. Shumpert is the first former NBA player to ever win DWTS, which is surprising given the great track record that athletes and Olympians have on the show. It also marked the first win for his pro partner Daniella Karagach, who only joined the show in Season 29.

READ NEXT: 10 Celebs Who Should Have Won ‘DWTS’ But Lost

Shumpert became a fan favorite after improving his dance skills every episode and delivering some of the season’s most memorable routines, including his death-defying Horror Night dance.

Shumpert proved why he was deserving of the title with his final two routines, a cha cha and foxtrot fusion set to Earth, Wind & Fire’s “September,” and a hip-hop freestyle routine to Missy Elliott and Ciara’s “Lose Control.” Both dances were some of the most celebratory and joyous routines of the night, and both earned a perfect score from the judges.

Siwa and partner Jenna Johnson honored the LGBTQ community with their freestyle routine, celebrating their historic achievement as the show’s first same-sex pairing. Siwa started solo, lip-syncing to Lady Gaga’s empowerment anthem “Born This Way,” before Johnson came in, adding impressive lifts and leg kicks. But the most poignant moment came when background dancers joined the routine then switched roles, men dancing with men and women dancing with women. It was a subtle yet triumphant move of long-overdue LGBTQ representation.

The duo earned a perfect score for both of their routines, including their tango and cha cha fusion, but fan votes only carried them to second place.

Rigsby’s inclusion in the DWTS finale was controversial for many fans after he kept advancing in the competition by fan votes while contestants who received higher scores were eliminated. The Peloton instructor had something to prove, and he did just that on the finale. Rigsby and partner Cheryl Burke earned a perfect score for their freestyle (just like everyone else), starting with Beethoven’s Fifth before going into Todrick Hall’s “Nails, Hair, Hips, Heels” for an all-out celebration of queerness and glamour.

However, their paso doble and cha cha fusion didn’t captivate judges as much, earning a 36 out of 40. It was the lowest-scored routine of the night, but the power of Rigsby’s Peloton followers lifted them to a respectable third place.

Amanda Kloots Dazzles In The Air

Kloots and partner Alan Bersten started their freestyle routine by flying around in the air. Pink would be proud. Once they reached the ground, the duo dazzled with a glittery and laser-filled dance set to Coldplay’s “A Sky Full of Stars,” filled with jaw-dropping lifts and spellbinding twists.

Their aerial stunt was enough to get a perfect score, but their Viennese waltz and paso doble fusion felt short, earning a 38 out of 40. While that’s still impressive by DWTS standards, it was only enough for fourth place in the finals.

More like this
Everything To Know About 'The Real Housewives Ultimate Girls Trip' Season 4
By Jake Viswanath
RHOP’s Robyn Dixon Explained Why Juan Paid For Another Woman's Hotel Room
By Brad Witter
Andy Cohen Apologized To Larsa Pippen After A 'RHOM' Season 5 Reunion Dust-Up
By Brad Witter
'RHOSLC’s Heather & Whitney Are Still On A “Friendship Break” After Season 3 Reunion
By Jake Viswanath
Get Even More From Bustle — Sign Up For The Newsletter
From hair trends to relationship advice, our daily newsletter has everything you need to sound like a person who’s on TikTok, even if you aren’t.