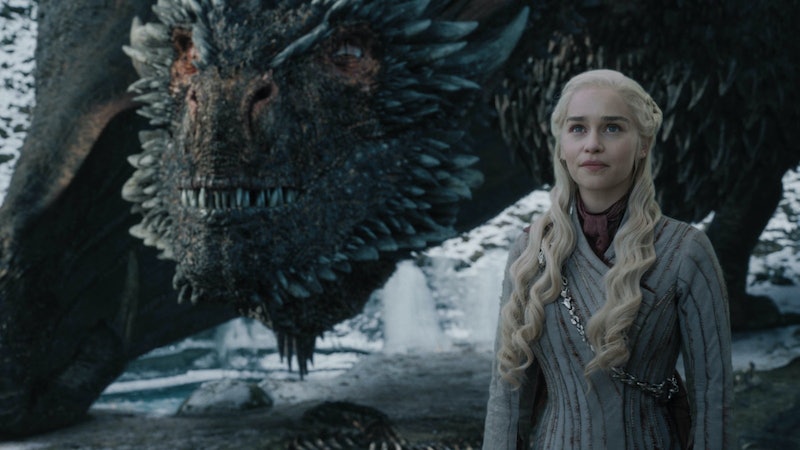 In the year since the final episode of Game of Thrones aired, fans are still wrestling with one major question regarding the finale: Where did Drogon take Daenerys' body? They may finally get an answer in the new book, Fire Cannot Kill a Dragon: Game of Thrones and the Official Untold Story of the Epic Series, because Emilia Clarke has a theory about what happened to Drogon after he flew away from Westeros one last time. Fair warning: it's even more heartbreaking than any of the other characters' post-show fates.

After Jon Snow (Kit Harington) killed Dany in the smoking ruins of King's Landing in the Season 8 finale, her last remaining dragon melted down the Iron Throne before scooping her body up into his talon and flying far, far away from the spot of her demise. According to TVLine, Clarke told author James Hibberd that she doesn't think he was headed to Essos or Old Valyria, as some fans have theorized, but is instead, still flying today. "I think he flies around with her body until it decomposes," she said. "I literally think he keeps flying until he can’t fly anymore. He just keeps grieving."

While the show's writers haven't commented on Clarke's theory, it does match up with what fans learned at the very end of GoT's finale, when the new Grand Maester, Sam (John Bradley) tells King Bran the Broken (Isaac Hempstead-Wright) that Drogon "was last spotted flying east." Master of Coin Bronn (Jerome Flynn) then responds that "the farther away" the last remaining dragon goes from Westeros, "the better."

Clarke's theory about Drogon is a fitting tribute to her character, especially considering Dany's controversial legacy on the show. In May 2019, the actor told The New Yorker that she doesn't want Daenerys to be remembered as the "Mad Queen," explaining that she has her own complicated relationship with her character's fate. "Daenerys has quite consistently had this road to salvation, and she’s been sitting atop a very safe mountain," Clarke said at the time, adding that she didn't see that final twist coming any more than fans did. "I don’t enjoy fans calling me 'the Mad Queen.'"

Clarke's own memories of Dany will always be particularly positive, as the actor has explained that the character helped save her life in the wake of the two brain aneurysms that she experienced in 2011. "I always say that Daenerys literally saved my life, because it puts you in quite the headspace when you’ve had a brain injury," she told Regina King during Variety's Actors on Actors interview. "Walking in her shoes, I just put so much more into each season because it really was life or death. I felt so powerfully that she was saving me. I could only see her."

Like Drogon, Clarke will always love Dany. "It’s a very beautiful and touching ending," she told Entertainment Weekly in May 2019. And no matter what, she added, "I stand by Daenerys. I stand by her! I can’t not."