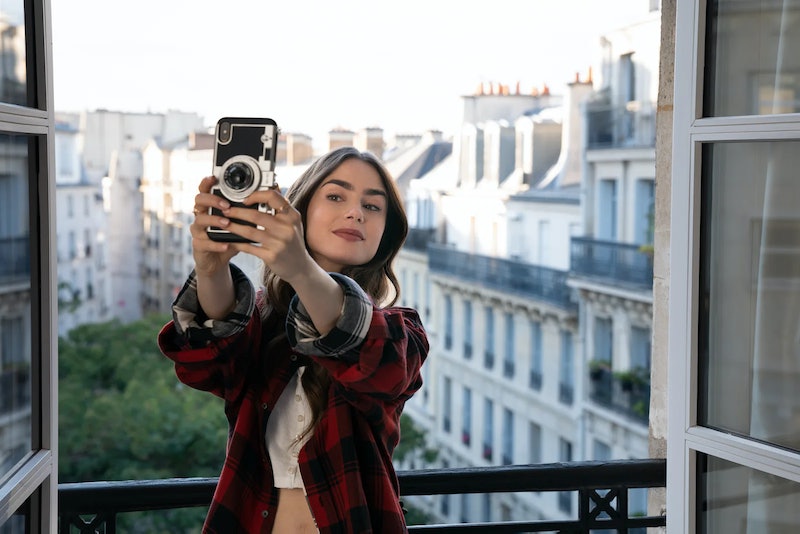 Sylvie Grateau would not be pleased. Emily In Paris got nominated for two Golden Globes — Best Comedy Series and Best Actress in a Comedy Series for star Lily Collins — on Wednesday, Feb. 3, and even fans are shocked. Darren Star's first Netflix show received a polarizing reception after its October 2020 release, so the Hollywood Foreign Press Association's love of the series came as a total surprise. But in the darkness, there's always light, which can be found in the form of memes and tweets about Emily in Paris' nominations.

When the news hit, Collins released a statement to E! News saying she was grateful and "overwhelmed with happiness." She continued:

"I'm beyond thrilled the series was recognized and I feel so lucky to be in a category including such incredible women who have kept me laughing and smiling all year long. The greatest gift of playing Emily has been providing a sense of escapism and fun during a time when we all needed it most. I'm so proud of this show and so thankful to the HFPA, Netflix, Darren and the entire cast and crew without whom Emily would be truly lost... Thank you again from the bottom of my heart. Bisous!"

No matter how much escapism the show may have provided, social media is losing it over the surprising nods and crafting memes that show just how divided Emily in Paris viewers are. Dare I say, they are... golden.

Some Twitter users are also taking out anger over their favorite shows not getting love at the Globes on Emily In Paris — and in cases of snubs like Never Have I Ever, deservedly so.

Others, however, were just angry or bewildered.

There were some celebrations online, though. But that's no surprise considering enough people watched the show for Netflix to renew it for Season 2.

In a new interview with Deadline, Collins revealed that she didn't know what was being written for Season 2, but did have some thoughts about Emily's love life in Paris. "I think it would be a little early for Emily to lock something in," she said. "I think she’s still exploring the prospects. Honestly, I think Emily doesn’t even know, and that’s the beauty of the way that they write the show. She has yet to find all the qualities she maybe is looking for." The cast and crew also hope to start production soon as long as it's safe. “We’re aiming to hopefully be going back soon," she said. "Hopefully in springtime."

Emily in Paris will compete against The Flight Attendant, The Great, Schitt's Creek, and Ted Lasso for Best Comedy Series. Collins is nominated alongside Kaley Cuoco for The Flight Attendant, Elle Fanning for The Great, Jane Levy for Zoey's Extraordinary Playlist, and Catherine O'Hara for Schitt's Creek in the Best Actress in a Comedy Series category. Fans will have to wait until Feb. 28 to see if mademoiselle Emily Cooper can snag herself a Golden Globe. Given how Schitt's Creek swept the 2020 Emmys, the competition will be tough.

More like this
Twitter Is Burning As Phoebe Dynevor Reveals Daphne’s 'Bridgerton' Exit
By Sophie McEvoy
Ashton Kutcher Wants Danny Masterson “To Be Found Innocent” In Rape Retrial
By Jake Viswanath
'The Queen’s Gambit' Season 2 Tweet Wasn’t From Anya Taylor-Joy
By Mary Kate McGrath, Jack Irvin and Grace Wehniainen
'The Crown' Season 6 Has Suspended Filming "Out Of Respect" For The Queen's Death
By Bustle Staff
Get Even More From Bustle — Sign Up For The Newsletter
From hair trends to relationship advice, our daily newsletter has everything you need to sound like a person who’s on TikTok, even if you aren’t.