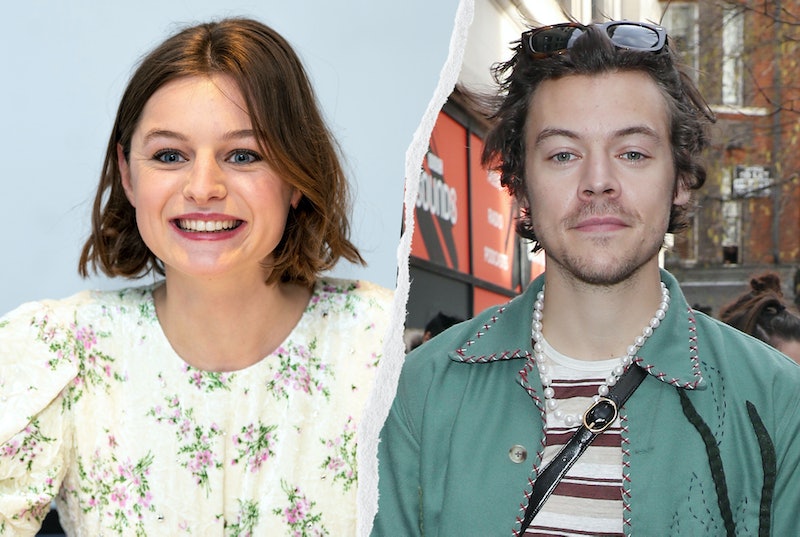 While relatively new to the celebrity circuit, The Crown's Emma Corrin is fast becoming our new favourite — especially with this recent revelation. During an interview with U.S. late-night TV host Jimmy Fallon, Emma Corrin revealed Harry Styles is her dogsitter (or, at least, was her dogsitter). And, quite frankly, it's the celebrity news we didn't know we needed.

Fresh from her debut as a very convincing Princess Diana in season four of the royal drama, the 24-year-old actor appeared on the Tonight Show to talk about the exciting new gig. However, it was talk of Corrin's friendship with Harry Styles that left fans mind-blown.

During the interview, Corrin talked about only having her dog Spencer as company during the very early days of lockdown (v. relatable content). Presenter Fallon shared a sweet photo of Corrin and Spencer playing cards before the actor revealed that Styles "dogsat" for her on one occasion.

In the funny clip, she said: "He once dogsat for me. The thing I love about it is my dog has no idea. That's the wonderful thing about it. For my dog it's just a person."

Turns out, Styles has not committed to regular dogsitting for Corrin... and that maybe pet pooch Spencer's fault.

"I was having dinner, I sort-of know where he lives, and he looked after Spencer for me," she shared, "but not again, because halfway through the meal I got a message that said 'he won't stop farting, is this normal?'"

"Was it from Spencer or from Harry," Fallon joked in the very cute exchange.

We're looking forward to more conversations with Corrin, especially if they include more Harry Styles content.

Now, before someone fires up the rumour-mill, close friends reportedly claim “nothing romantic” exists between the Styles and Corrin. As Bustle revealed last week (Nov.13), the pair – who reportedly met at one of Styles’ gigs last year – share the same stylist, Harry Lambert, as well as having mutual friends. According to a close source “they’re both private people so no one seems to realise they are actually mates.”