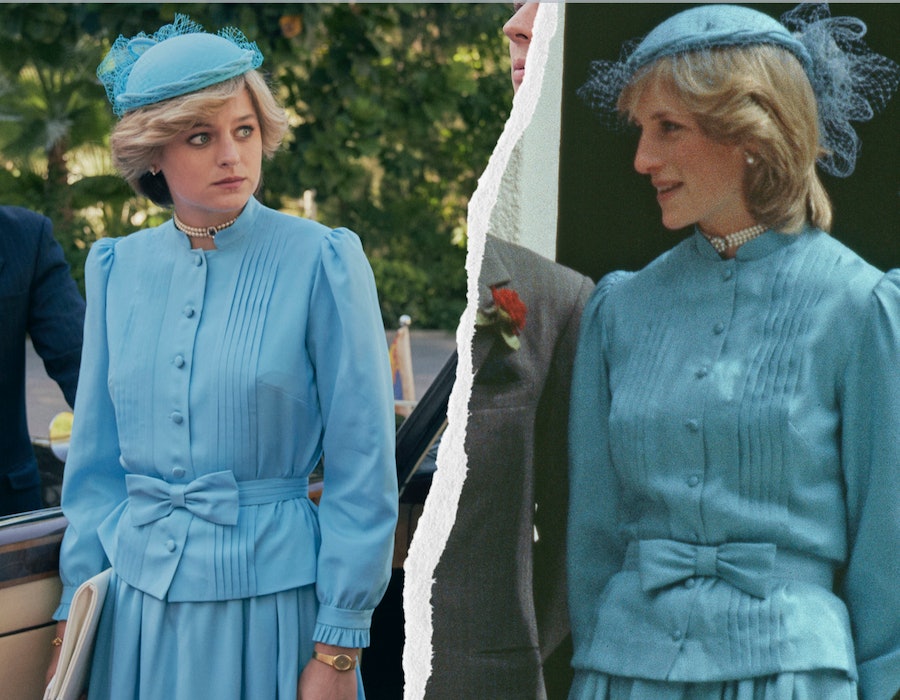 It's easy to conflate fact with fiction when watching Netflix's The Crown. Between the ripped from the headlines plots and the verisimilitude of the acting, it's the most we've ever seen the notoriously private Windsors. To that end, the show employs a full research team and a historical consultant, the royal historian Robert Lacey, who are together responsible for making sure nothing is out of time or place. As Lacey told Town & Country Magazine in 2017, "The offices of The Crown are almost a newsroom. There are eight to 10 researchers at this double bank of computers, with books, a library, everything, and they are working every day, preparing the raw material."

Lacey prefers not to think of the show's depictions as true or false, but instead real or imagined. Most of what's happened in the past is elusive; even with a famous family, no one writes down or photographs the minute flourishes of daily life. That's what Lacey and the research team are charged with recreating. For example, we don't know exactly what Queen Elizabeth and Prime Minister Harold Wilson said to each other after a disaster struck the small Welsh mining town of Aberfan in 1966. But we know they met, and we know that days later, the Queen went to Wales.

Lacey staunchly defends the decisions The Crown team has made in attempting to recreate what's lost. "History is a truth, but there are other truths that are conveyed in the drama."

But where plotlines and dialogue can be slippery, a photo is forever. The Crown meticulously recreates moments from recorded history, as shown in these photo comparisons between the actual royal family (and royal hangers-on) and their television counterparts.

Recreating Princess Margaret's looks from her island holidays to Mustique in Season 3 was aided by the troves of photos that exist from her time there.

Of playing Prince Philip, Menzies told the New York Times he did his homework. "There is a lot written, a lot of footage, and it's both intimidating and an amazing resource," he said. "There is the technical aspect of working on the voice and physicality, which I enjoyed; those parameters can paradoxically be very creative. But it can be its own crazy rabbit hole."

In The Crown Season 3, we see Prince Charles invested in the theater community at university, but he also continued to play polo. The above left photo was taken following a match between Cambridge University and Hertfordshire in 1968.

Series newcomer Emma Corrin portrays Lady Diana Spencer as she embarks on her very public courtship with Prince Charles. Corrin was just a toddler when Diana died in 1997, so she studied Diana's speech patterns with her mom, a speech therapist, to prepare for the role. “No matter what Diana is saying, it kind of goes down at the end,” Corrin told Town & Country. “It’s like a sadness.”

In Season 4, Princess Anne continues to be a central character, played sympathetically by Erin Doherty. Though her own marriage is on the rocks, she encourages Prince Charles to do his duty and settle down. As the actor told Bustle, "[Anne] has the ability to just be a normal human being in this really abnormal situation. And that's what makes you so drawn to her. She's reacting, I feel, as any of us would."

As in real life, polo played a role in the romance between Camilla and Prince Charles as young people. Above, Camilla can be seen speaking with Charles at a polo match in the early 1970s. It would be another three decades before the pair finally married.

Prince Andrew is currently a controversial figure, but Tom Byrne has taken portraying the Queen's middle son in stride. "The Sun ran a headline which made me laugh,” Bryne told The Standard. “It was ‘Worst part on TV?’ Good news, you’re in The Crown; bad news, you’re playing Prince Andrew.”

Fleabag actor Angus Imrie plays the Queen’s youngest son Edward, who went on to become the Earl of Wessex.

Margaret Thatcher was known for her tailored skirt suits. On the left, Thatcher wore a cobalt blue suit when she was named the country's first female Prime Minister in 1979.

Michael Shea was palace press secretary for almost a decade until he inserted himself in the political disagreements between the Queen and Margaret Thatcher.

Just as The Crown depicts, a man named Michael Fagan really did break into the Queen's bedroom in 1982. The incident is considered one of the 20th century's worst — and most bizarre — royal security breaches.

This article was originally published on November 22, 2019