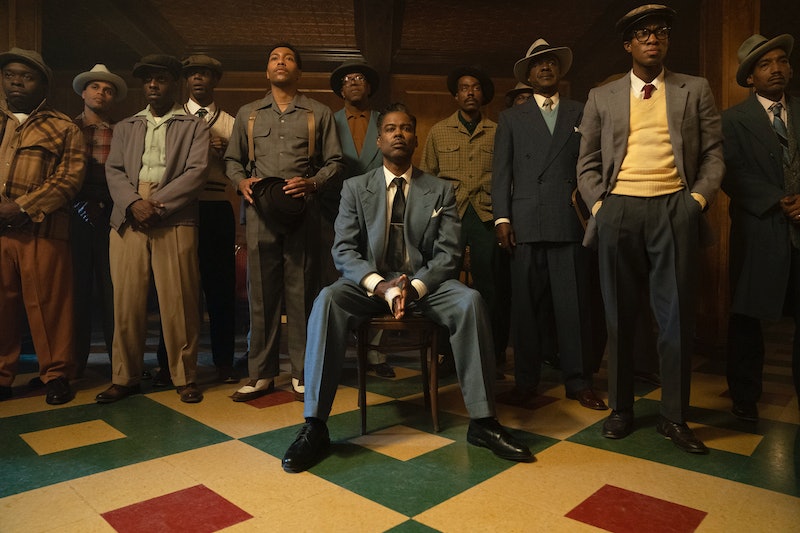 Five months since it was originally scheduled to debut, the highly anticipated new season of FX's Coen-inspired anthology series is finally here. Fargo Season 4's sprawling cast of movie stars, TV icons, and indie rockers had to reassemble six months after filming was shut down in March in order to complete the season's final two episodes. And now viewers will get to delight in the latest star-studded, blackly comic crime saga from the mind of creator Noah Hawley.

So who did Hawley get to bring his most recent vision of the icy, violent Midwest to life? In keeping with the show's established pattern, this even-numbered season (like Season 2) is a period piece, taking place in 1950s Kansas City, Missouri. (Seasons 1 and 3 were both modern sagas.) Here's everyone you'll meet on the windblown streets of Missouri when Season 4 premieres on Sunday, Sept. 27.

You'll undoubtedly be familiar with Season 4's main headliner, whether as a Saturday Night Live alum, a stand-up comedian, the star of The Longest Yard and Madagascar, the producer of TV's Everybody Hates Chris, a two-time Academy Award host, or all of the above. Somehow, despite those myriad credits, Fargo marks a first for Chris Rock: it's his first starring role on a scripted television show. In Season 4, Rock portrays Loy Cannon, the leader of a new Black mob going toe-to-toe in a turf war with the entrenched Italian mafia.

No, Josto Fadda isn't the name of the bounty hunter in a new Star Wars movie; rather, Schwartzman's character is the head of the Italian mafia who finds himself squaring off against Rock's Loy Cannon. You may know Schwartzman from his many collaborations with filmmaker Wes Anderson, having appeared in seven of the director's features, including Rushmore, The Darjeeling Limited, Fantastic Mr. Fox, Moonrise Kingdom, The Grand Budapest Hotel, Isle Of Dogs, and the upcoming The French Dispatch. You might also have seen Schwartzman in other quirky comedies like Walk Hard: The Dewey Cox Story, Scott Pilgrim vs. The World, and A Very Murray Christmas.

This Irish actress is arguably one of Hollywood's hottest rising stars. She first made a splash with her feature film debut in the 2017 indie horror film Beast, which she followed up with an acclaimed performance in the 2018 musical drama Wild Rose. Her other credits include a role in the 2019 Oscar-winning biopic Judy and a memorable turn in HBO's Chernobyl. Most recently, she was seen experiencing the family dinner from hell in Netflix's recent psychological thriller I'm Thinking Of Ending Things — in which she shared the screen with Fargo Season 2 star Jesse Plemons and Fargo Season 3 star David Thewlis. In Fargo Season 4, Buckley portrays murderous nurse Oraetta Mayflower, whom Vulture's Matt Zoller Seitz compares to another Coen Bros. villain, No Country For Old Men's terrifying Anton Chigurh.

Fans of Timothy Olyphant's work should feel right at home watching him on Fargo Season 4, seeing as how it's the actor's third time playing a U.S. Marshal, following his star-making performances as Seth Bullock on HBO's Deadwood and Raylan Givens on FX's Justified. How does Dick "Deafy" Wickware differ from those two memorable characters? He also happens to be a devout Mormon. Olyphant's other TV work includes starring roles on Damages and Santa Clarita Diet, and his film credits include Scream 2, Live Free Or Die Hard, and last year's Oscar-winning Once Upon A Time… In Hollywood. Next, he'll appear in The Mandalorian Season 2 as a mysterious new character named Cobb Vanth.

Even if you don't recognize his face, you might recognize Ben Whishaw's voice, since he's the man behind the cuddly brown face of the titular bear in both Paddington and Paddington 2. In roles where you do see his face, Whishaw is probably most famous to American audiences for his role as Q in the James Bond franchise; he first appeared as the spy's geeky tech wizard in 2012's Skyfall, and reprised the role in both Spectre and the upcoming No Time To Die. His other credits include Cloud Atlas, The Lobster, The Danish Girl, Mary Poppins Returns, and the 2018 miniseries A Very English Scandal, which earned Whishaw both an Emmy and a Golden Globe. Whishaw's Rabbi Milligan is a member of the town's Jewish gang who has become an "honorary" member of the Italian mafia.

Like Whishaw, Huston — who portrays corrupt cop Odis Weff — is another actor whose face you might not recognize even if you've seen his work. That's because his most famous role is as disfigured assassin Richard Harrow on HBO's Boardwalk Empire, a part which required Huston to cover half of his face in a creepy porcelain mask. This isn't Huston's first time acting in a Coen Bros.-adjacent property, having appeared in the directors' 2016 film Hail, Caesar! His other film credits include American Hustle, Pride and Prejudice and Zombies, the remake of Ben-Hur, and last year's The Irishman. He can currently be seen in the controversial horror film Antebellum.

If you enjoyed Fargo creator Noah Hawley's work on his other acclaimed FX series Legion, then you'll recognize Jeremie Harris, who plays Leon Bittle, a member of Loy Cannon's gang. Harris re-teams with Hawley after working with him on that Marvel Comics-inspired project, on which he played Ptonomy Wallace, a mutant with the power to take people inside their own memories. Harris has also played Langston Hughes in the HBO film Bessie, and had a recurring role on Netflix's The Get Down.

With 160 credits to his name over the past six decades, Turman is something of a TV legend for a certain generation. Most famous for playing Colonel Bradford Taylor on the Cosby Show spinoff A Different World through the late 1980s and early 1990s, Turman's credits also include appearances on such beloved shows as The Love Boat, The Twilight Zone, Murder, She Wrote, Matlock, The Wire, ER, American Gods, and black-ish. He won an Emmy for his guest appearance on HBO's In Treatment, and was nominated for another for his role on How To Get Away With Murder. On Fargo, Turman portrays a character respectfully referred to as "Doctor Senator," who serves as Loy Cannon's consiglieri.

Not all of the characters in Fargo Season 4 will be played by professional actors; indie rock and folk musician Andrew Bird has also joined the cast in his first scripted performance as Thurman Smutny, a role that Bird told Pitchfork was written specifically for him by Hawley. The Illinois-born singer and violinist released his first album, Music of Hair, in 1996 and has released over a dozen more albums and EPs in the years since, both as a solo artist and as a member of various ensembles like the Squirrel Nut Zippers. His most recent album, My Finest Work Yet, was released in March of last year.

The 11-episode fourth season of Fargo will premiere on FX on Sunday, Sept. 27, at 9:00 p.m. ET, and will be available to stream the next day on Hulu as part of the network's "FX on Hulu" partnership.