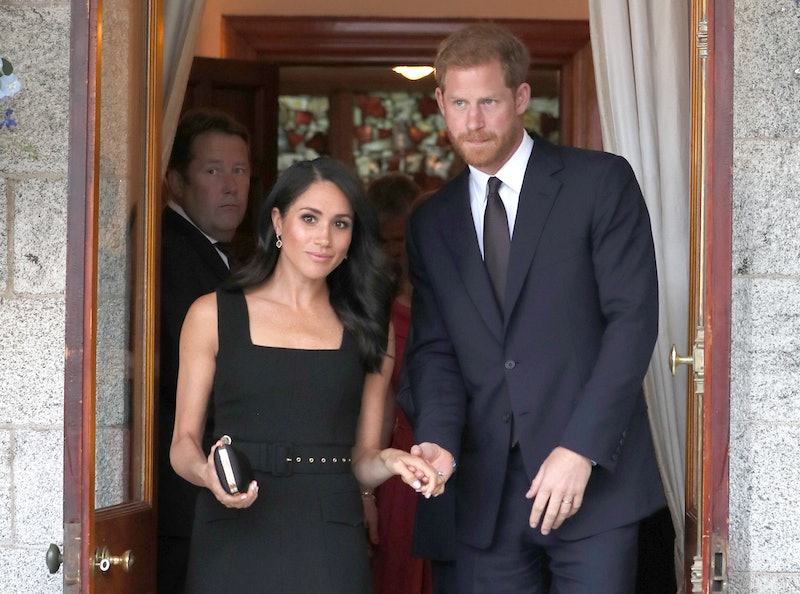 There's Hitchcockian thrillers, the twists of Game of Thrones, and then there's the heart-pounding intensity of the first teaser for Meghan Markle and Prince Harry's interview with Oprah Winfrey. The sneak peek gives a small glimpse at the highly-anticipated sit down with the former royals, which will air on CBS next Sunday. "You've said some pretty shocking things here," Winfrey teases, none of which the preview lets us hear. She also pointedly asks Meghan, "Were you silent or were you silenced?" and "Almost unsurvivable sounds like there was a breaking point."

This will be the couple's first time opening up about leaving the Royal Family since exiting their senior roles and giving up all patronages with U.K. charities. As Winfrey states, it appears Meg and Harry have come to the conversation prepared with receipts. "I just want to make it clear to everybody. There is no subject that’s off-limits," she notes. Topics of convo could include Meghan's pregnancy with the couple's second child, the couple's non-profit Archewell, and, oh, what pushed them to ditch the entire British monarchy and move to the States. Perhaps as an answer to that last one, Harry said: "My biggest concern was history repeating itself," referencing his late mother, Princess Diana.

It appears that Meghan and Harry will both have individual interviews with Winfrey as well as a joint conversation. In a second teaser, Harry elaborated on his mother's own struggles within the royal framework prior to her tragic 1997 death. "You know, for me, I'm just really relieved and happy to be sitting here, talking to you with my wife by my side because I can't begin to imagine what it must've been like for her going through this process by herself all those years ago," Harry said while holding Meghan's hand. "Because it has been unbelievably tough for the two of us, but at least we have each other."

Since departing their roles as the Duke and Duchess of Sussex, the couple has moved to Montecito, California (in Oprah's neighborhood) with their 1-year-old son, Archie, signed a development deal with Netflix, and prepped a Spotify podcast to officially launch this year. As for Buckingham Palace's reaction to Meghan and Harry's Oprah interview, it's reportedly short and not exactly sweet. "The Duke and Duchess are no longer working members of the royal family, and therefore any decisions they take with regard to media commitments are matters for them," Buckingham Palace said, according to the Daily Mail's royal correspondent, Rebecca English.

The 90-minute conversation, Oprah with Meghan and Harry: A CBS Primetime Special, will air on CBS on Sunday, March 7, at 8 p.m. ET.