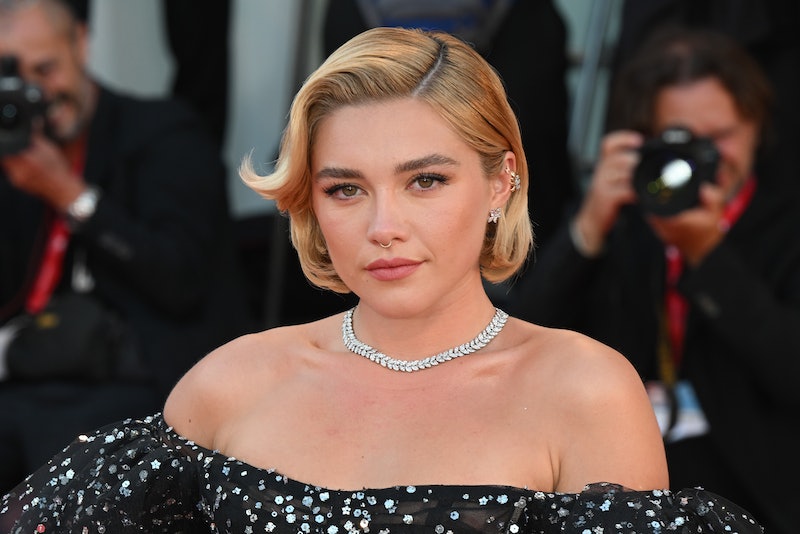 From widespread feud rumors to cast changes to “Spitgate,” drama has been more than just a genre classification for Don’t Worry Darling. Marred by multiple controversies, the film’s seemingly endless journey to the box office — including a much-talked-about press tour — was a rocky one, to say the least. Nevertheless, release day finally arrived on Sept. 23, and despite all the outside noise, star Florence Pugh celebrated the psychological thriller’s release by reflecting on the filming process.

Once the movie was “ready to be seen,” the Academy Award nominee shared 20 personal behind-the-scenes photos on Instagram — and, yes, even director Olivia Wilde appeared in one of them. “We met so many talented people, visited some insane locations, worked hard in the desert dust and looked good whilst doing so,” Pugh wrote, also thanking the hair and makeup team and those who already bought tickets. “Whenever I watch massive impressive movie moments on massive screens I always remind myself that there is a boom just inches from the frame I’m watching. Or marks on the floor just below the actors waists.”

Citing “explosions, car chases, cocktail balancing, underwater sequences, running, drinking, [and] more running,” the actor added, “It’s crazy to think that each set up and scene takes a large portion of a day to execute, and on this one.. there was a lot to execute!” She continued, “This film was such an epic story on such a large scale to shoot, all while during peak Covid times. For that I will always be grateful. To all of you who helped make this, your dedication and love was seen daily — thank you.”

Shortly afterward, Pugh captioned a second grouping of personal photos more simply, writing, “We saw suns rising as moons set…” Kicking off the carousel with a hilarious shot of herself in the makeup chair, that actor also featured several production team members, along with co-stars Asif Ali, Ari’el Stachel, and KiKi Layne. Also re-sharing one photo of Nick Kroll to her Instagram stories, Pugh joked that her castmate was “being the tarmac diva,” adding a kiss emoji.

The irony of Pugh’s (reportedly!) bumpy Don’t Worry Darling journey culminating with an Instagram post, of course, is that social media was a source of rumors of a falling out between her and Wilde in the first place. Speculation picked up steam after several outlets reported that Pugh failed to share the movie’s trailer and also didn’t “like” Wilde’s promo post. Once fans and the media alike started dissecting both women’s seemingly incongruous interview comments, all the behind-the-scenes drama began making more headlines than the film itself.

Further fueling the rumor mill were reports that Pugh was paid much less than co-star Harry Styles, aka Wilde’s current boyfriend, for the film. However, the director categorically denied any pay gap rumors. “There has been a lot out there that I largely don’t pay attention to,” Wilde told Variety in August. “But the absurdity of invented clickbait and subsequent reaction regarding a nonexistent pay disparity between our lead and supporting actors really upset me. I’m a woman who has been in this business for over 20 years, and it’s something that I have fought for myself and others, especially being a director. There is absolutely no validity to those claims.”

More like this
Blake Lively's Reaction To Ryan Reynolds' Dance Video Was Pure Thirst
By Stephanie Topacio Long
Michelle Williams Laughs Often About Motherhood Thanks To 'The Fabelmans'
By Marina Watts
Then Vs. Now Photos Of The 'Enchanted' Cast In 2007 & The Sequel's Stars In 2022
By Marina Watts
'Wakanda Forever' Is Already Opening Doors For Mabel Cadena
By Grace Wehniainen
Get Even More From Bustle — Sign Up For The Newsletter