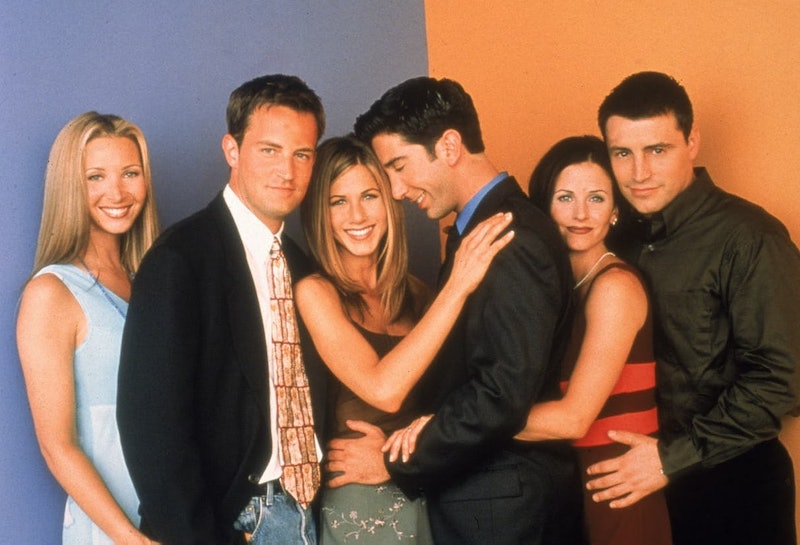 The Friends actors are funny, hardworking, talented, and rich. They’re not “doing well,” they’re RICH. The amount of money connected to that show, which premiered in 1994 and ended in 2004, and the people who made it work so brilliantly, is insane. One quick look at the numbers has us all thinking about switching careers and heading to Hollywood to make some friends of our own. How much did they exactly make during their heyday on Friends (apparently, not enough to prevent the cast from stealing things from the Friends set)? And what have they done since? Ahead of HBO Max’s much-hyped Friends: The Reunion special on May 27, let’s dive in and find out.

Here’s how much Jennifer Aniston, Courteney Cox, Lisa Kudrow, Matt LeBlanc, Matthew Perry, and David Schwimmer are worth and how much they made per episode while filming and every year after the show ended from reruns.

How Much Money Does The Friends Cast Make On Reruns?

The six actors who made Friends as wonderful as it is have moved on to new projects, with each of them finding success again on the small screen. The show that made them stars will always stand as not only their biggest win but also their most profitable. Even though the program has been off the air for 17 years, the stars are all still raking in the dough from the series, which pays them more per annum than most people will make in a lifetime. According to USA Today, Warner Brothers, the studio behind the gargantuan ratings success, still brings in an incredible $1 billion every year from the show from syndication rights, and some of that trickles down to the stars. Each star takes home just 2% of that sum, and while that may be a small percentage, it adds up to $20 million per cast member, per year — for work they did two decades ago.

How Much Did The Cast Of Friends Make Per Episode?

The amount of money each Friends cast member made per episode was a hot topic while the show was on the air, and it remains a detail that helps the show stay legendary and mythical. For the final two seasons, all six stars brought home an insane $1 million per episode, which made them the highest-paid people on TV at the time, though the sum wasn’t always that high. When Friends debuted, Aniston, Cox, Kudrow, LeBlanc, Perry and Schwimmer, were paid $22,500 per episode. That’s still a very healthy figure, but it pales in comparison to what they would eventually earn.

According to Business Insider, the paycheck didn’t change too much when the show returned, but after the third season, it really began to improve their ways of life. Starting in the third season, the six actors began bargaining collectively, as opposed to only worrying about themselves. Since Ross and Rachel were the focus, they initially made more, but then they all insisted on earning the same amount moving forward. In Season 3, all the stars were paid $75,000 per episode, which rose to $85,000 in Season 4. Season 5 saw them finally hit $100,000 per episode, and that improved slightly to $125,000 in Season 6. The leap in price for their talents from the sixth season to the seventh season is astronomical, as the actors jumped to $750,000 per episode, and the checks only got bigger from there.

What Is Jennifer Aniston’s Net Worth?

Of all the Friends, Jennifer Aniston has the most impressive net worth, and it’s not even close. The actress is reportedly worth $300 million, and it’s not all due to her work on the NBC sitcom. She has also starred in many well-known romantic comedies, signed several high-profile contracts with brands like Aveeno and Smart Water, and she scored another huge payday on The Morning Show, where she apparently makes $2 million per episode.

What Is Courteney Cox’s Net Worth?

The woman formerly known as Monica is worth a whopping $150 million, and while that may be half of what Aniston has to her name, at that point, who’s really counting? Like her friend and one-time co-star, Cox also took home tons of cash by appearing in ads for companies like Panteene, and she has starred on two additional shows, Cougar Town and Dirt, as well as the financially successful Scream franchise. All of this deserves a turkey dance.

What Is Lisa Kudrow’s Net Worth?

Since appearing in Friends, Lisa Kudrow has continued to work, and though she surely doesn’t make anywhere near what she used to on the famed sitcom, it all adds to her noteworthy net worth of around $90 million. Kudrow garnered critical acclaim in her oft-overlooked comedy The Comeback, which may be the best work of her career. Kudrow hit the jackpot in her personal life too with a marriage lasting 26 years, so far, and a son who just graduated from college.

What Is Matthew Perry’s Net Worth?

Perry’s net worth reportedly sits at around $120 million. While he probably doesn’t bring in massive paychecks like he used to for his acting (though he still appears in movies and TV shows), it looks like real estate is helping keep him living in luxury. A Google search of his recent activities shows he’s always buying something and selling it years later for a profit of several million.

What Is David Schwimmer’s Net Worth?

The one-time love interest of the richest Friends cast member is now worth $100 million, an eye-popping figure for someone who only acts occasionally these days. While the bulk of that figure surely came from the series that made him a household name and smart investments afterward, Schwimmer continues to pop up here and there, most recently in The People v. O. J. Simpson, which earned him another Emmy nomination — 21 years after his first nod for Friends.

What Is Matt LeBlanc’s Net Worth?

Of all the Friends, Matt LeBlanc is the “poorest” former cast member, but please, don’t cry for him. The actor still has a net worth of at least $80 million, and he’s doing just fine. The superstar has worked more than any of his former co-stars on TV, and he always seems to have something airing on the small screen. After Friends wrapped, LeBlanc kept his character Joey Tribbiani alive on the semi-self-titled Joey, which lived on NBC for two seasons. He also starred in Man with a Plan for four seasons, and he hosted Top Gear for several seasons as well, all of which paid him handsomely.

More like this
What Is Pamela Anderson’s Net Worth? She Was Never Paid For Her Stolen Sex Tape
By Hugh McIntyre
Emily Atack’s Net Worth Would Make Charlotte Hinchcliffe Proud
By El Hunt
David Beckham’s Controversial Qatar Deal Skyrocketed His Net Worth
By Catharina Cheung
Maya Jama’s Net Worth Definitely Won’t Give You The Ick
By Sophie McEvoy
Get Even More From Bustle — Sign Up For The Newsletter
From hair trends to relationship advice, our daily newsletter has everything you need to sound like a person who’s on TikTok, even if you aren’t.