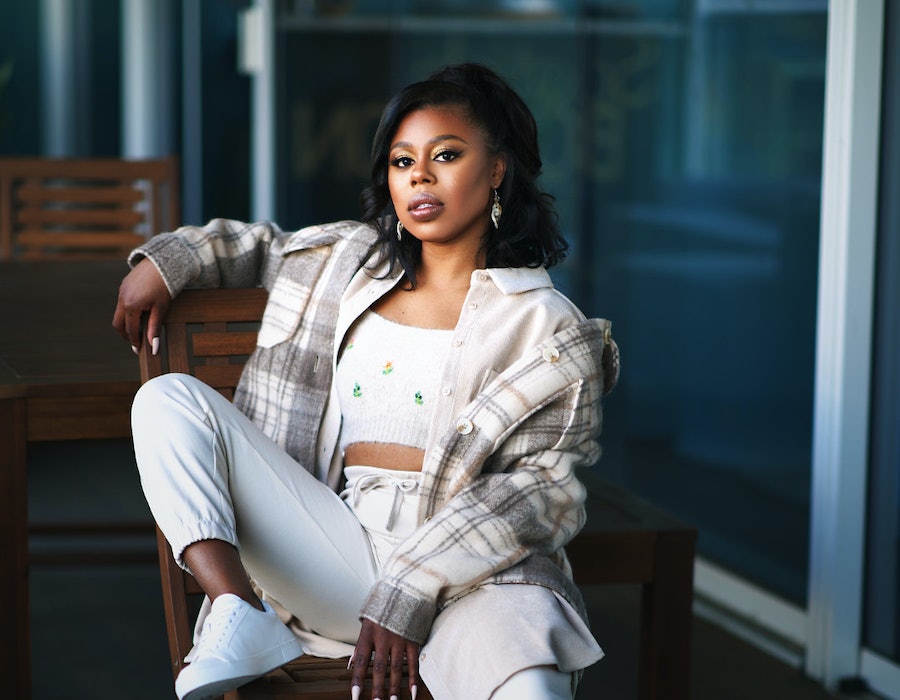 You might recognize Gail Bean as Rasheeda in Insecure or from her guest spots in Atlanta and Grey’s Anatomy, but Snowfall fans know Bean best as Wanda, the vibrant go-getter who helped Franklin Saint (Damson Idris) propel his crack business to new heights. Though she fell victim to the government-sponsored crack epidemic as it took hold of Los Angeles in the ’80s, this season, Wanda looks a little different. The tangled hair, dirty nails, and dry skin have been replaced with a glowing complexion, styled hair, and clean clothes — all signs Wanda is in recovery. It's a stark contrast from when Bean let her hygiene slip in previous seasons in order to fully embody the character. "I would, of course, shower now [and] brush my teeth, thankfully," Bean tells Bustle of her new routine. "Wanda has her teeth together."

The character of Wanda is particularly special to Bean, who has infused the character with her own personality after four years and four seasons of playing her on the John Singleton drama series. “I gave Wanda the kind of lovable, upbeat, positive, fun, energetic personality that I have,” Bean says. “I think that's why so many people did fall in love with her.” That’s made the less savory parts of Wanda’s personality as her story progresses in Season 5 a bit more difficult to stomach. After being addicted to crack, getting shot, and losing nearly everyone’s trust, Wanda is a completely different person who must now set out on an apology tour. The change was jarring for Bean. “I was like, ‘Oh wow, OK. We’re taking apart everything that I actually gave to her.”

Though the changes her character endures altered her approach to playing Wanda, Bean remains committed to telling her story — and the story of other Black women like her who many don’t see as human. She’ll do the same with her upcoming role on Season 2 of P-Valley. “Yes, it's heartbreaking to watch, but I do feel that it reaches people,” Bean says of how Wanda’s struggles with addiction have played out onscreen in Snowfall. “It helps people realize that this happened, and it's happening in America.”

Below, Bean discusses Snowfall Season 5 and seeing another Black woman grapple with substance misuse on television in Rue from Euphoria.

Snowfall and Euphoria are airing this winter, and the shows depict vastly different experiences of two Black women dealing with substance misuse and going through recovery. Have you seen Zendaya’s portrayal of Rue, and did anything stick out to you about how you two approach the subject matter?

It's on my watch list, but I haven't gotten to it yet. I've heard great things about her; I’m just happy that she's doing great. I actually watch documentaries [to prepare]. I watched J Is For Junkie and White Underbelly, and I also volunteer on skid row every Wednesday with My Friends House LA, and I have real interactions with actual LA people who are homeless, or on drugs, or have mental issues, or just fell on hard times in LA.

But I'm very happy that there is another African American female to tell the effects of drugs on a community because it's something that really plagues us at all ages. Wanda's experience is extremely different, because of the fact that Rue is privy to some things that darker-skinned women or people with less money are not privy to when it comes to rehab, or a supportive family, [or] people not shutting her out. [Rue] has more support sometimes with the favor of being a little fair skin or light, bright, damn near white — people still look at you as human. They don't see a lot of addicts, especially crack addicts, who are darker skinned or Black, as humans. But they’re both epidemics.

They are very different characters, and drugs affect every person differently, but it is nice to see that these things are being addressed now on television because it is an issue, especially in the Black community.

Is there anything that bothers you when you see people talking about your character?

They kind of brush her off, or they make memes of her as like, crack head funny. Some people are very, very worried about Rue. So that kind of makes me feel like, OK, this is how [dark-skinned] Black addicts are treated. Wanda is a godsend, but I feel like Wanda's lack of attention is people not seeing her humanity. That kind of bothers me.

Last season, Wanda had an episode with Mel (Reign Edwards) where they messed around all day before your character eventually told her like, "This was fun, but you need to come up off that necklace” so you could sell it for drugs. Now that Wanda and Mel are on their own recovery paths, how would you want them to interact if Mel returned?

That is my favorite episode. I thought that was so amazing. John Singleton — rest in peace, he passed while we were filming the episode. So it's very special, dear to me. I would love for Mel to come back and then I would be surprised to see how it goes in the sense of what her last memory of Wanda is. Because, sometimes when we see people that we haven't seen in a long time, you're always surprised at what memory comes back to you. With Wanda, she's very aware and very remorseful that she's done a lot of messed up stuff while she was on drugs. She may not know the extent of what happened, but she knows she's wrong, well, in some way. I do believe that she would be very apologetic. I don't know if Mel would be as forgiving, but I would hope so.

How do you think John Singleton would want Wanda’s story to end?

Truthfully, honestly, raw, unfiltered. We didn't talk about the end; we didn't see [his passing] coming.

You were recently cast in P-Valley Season 2. What can you tell us about that character?

More like this
'Derry Girls' Creator Teases Exciting Spin-Off Starring These Three Characters
By Olivia-Anne Cleary
The 'P-Valley' Season 2 Trailer Teases A Major Shakeup At The Pynk
By Johnny Brayson
At 28, Minnie Driver’s Personal Life Was “Falling Apart”
By Kate Dwyer
Pete Davidson & Kate McKinnon Are Part Of A Reported Major SNL Cast Shakeup
By Brad Witter
Get Even More From Bustle — Sign Up For The Newsletter