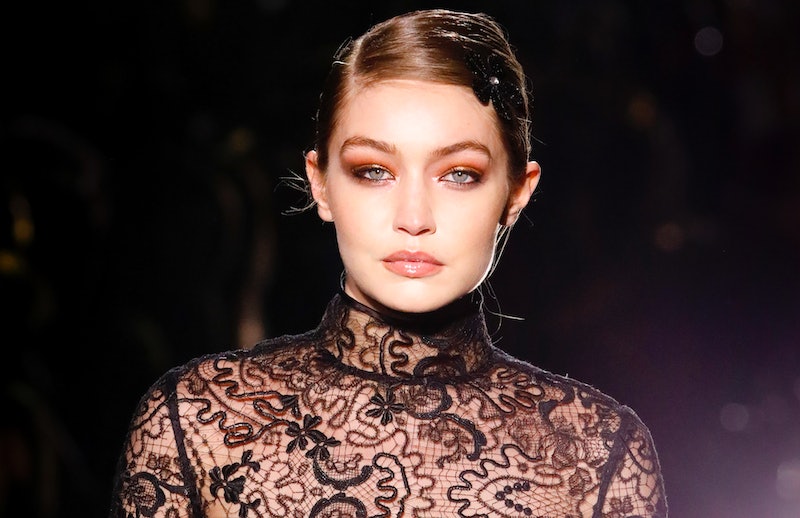 In a series of ethereal black-and-white snapshots, model Gigi Hadid finally showed off her growing baby bump on Instagram. Hadid, who is pregnant with her first child with boyfriend Zayn Malik, shared the photos taken by fashion photographer duo Luigi Murenu and Iango Henzi on Aug. 26. The images, which feature the model donning a dreamy, flowy dress that accentuates her protruding stomach, are definitely not your average maternity shoot.

Hadid captioned that she was “growin an angel” in the first post that features her photographed in a kneeled position. In the second post, Murenu and Henzi accentuate Hadid’s silhouette from the side, her dress delicately draping over her belly. And, in the third and final post, Hadid cradles her growing stomach in various shots as her hair is windswept in different directions. Under that last post, she wrote that she was "cherishing this time" and thanked fans for all the "love and well wishes" surrounding her pregnancy.

Since Hadid confirmed her pregnancy during an appearance on The Tonight Show With Jimmy Fallon on April 30 after the baby news was leaked to the media, she's been keeping her journey as an expectant mom pretty private — not sharing updates on Instagram or giving interviews on the subject. It wasn't until July that Hadid revealed her growing baby bump for the first time on an Instagram Live, explaining that she’s remained mum about her pregnancy online because she didn’t want to center herself amid all that’s happening in the world — from COVID-19 to the Black Lives Matter movement.

"I felt that our social media should be used for that,” Hadid explained, after she gave an update that she and her loved ones are “all good and safe.” The model then turned to the side to show off the profile of her growing belly, much to the delight of her followers.

While she and her family have spent much of quarantine at their farmhouse in Pennsylvania, Hadid and Malik are reportedly spending the final days of the pregnancy in Hadid’s newly-renovated New York City apartment. (The two were photographed in the city on Aug. 19.) A source told E! News that the two have already put together a nursery and read through their collection of parenting books. “Zayn and Gigi are really excited and have been loving this experience together,” the insider said.

There’s no telling where the baby’s nursery is situated in Hadid’s eccentric, colorful Manhattan apartment (which caught the attention of many when she unveiled it on Instagram in late July), but perhaps the baby will be just as fixated on that giant pen decor as we are.

More like this
Gigi Hadid Gave Up One Surprising Thing After Having A Baby With Zayn Malik
By Alyssa Lapid
Beyoncé Has Officially Won The Most Grammys Ever & Twitter Is Losing It
By Jake Viswanath
The Beyhive Is Mad At Harry Styles After Beyoncé’s Album Of The Year Snub
By Jake Viswanath
Here’s How You Can Watch The Grammys 2023 In The UK
By Emma Madden and Catharina Cheung
Get Even More From Bustle — Sign Up For The Newsletter
From hair trends to relationship advice, our daily newsletter has everything you need to sound like a person who’s on TikTok, even if you aren’t.