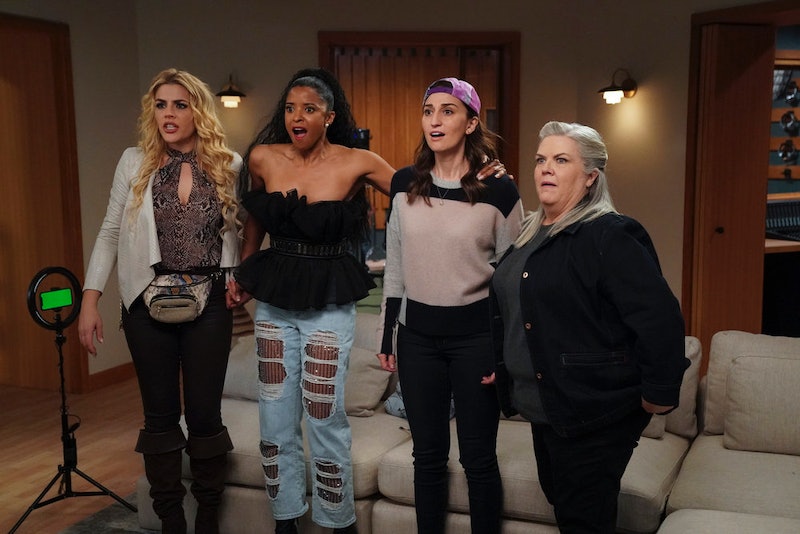 Forever was too short for Girls5eva, and many fans felt the same way about the musical comedy’s over-too-soon first eight episodes. Long before Peacock made the call regarding a Girls5eva Season 2, star Busy Philipps was among those praying for one. In a February Instagram story, which a fan shared on Twitter, the actor posted a video to the tune of Madonna’s “Like a Prayer” and showed off a candle featuring her and castmates Sara Bareilles, Renée Elise Goldsberry, and Paula Pell. “Our gift to the crew — a candle with our faces on it to pray for Season 2,” she captioned the post. On June 14, Philipps’ prayers were answered as Peacock officially renewed Girls5eva for Season 2.

Reacting to the news, Philipps took to Instagram to share screenshots of her and the rest of the cast’s ecstatic reactions to the news. “ITS HAPPENING! Did someone say reunion?! Girls5eva is coming 3gether for Season 2 on Peacock! We’re officially TWO hit wonders,” she captioned the post. The news isn’t too surprising considering all the generally positive reviews the series received. “Girls5eva hits just the right note between nostalgia and side eye for late ‘90s pop, with frequent flashbacks to the turn of the millennium when they were still a quintet,” The Hollywood Reporter’s Inkoo Kang wrote of the girl group-centered series. “But if there’s jokes for days, there’s plenty of heart here, too.”

NPR’s Aisha Harris opined that Girls5eva is “catchy enough to have you rooting for a comeback,” while Rolling Stone’s Alan Sepinwall called the show “endearingly daffy.” Variety’s Daniel D'Addario lauded it as a “sophisticated joke-delivery machine that will hold special appeal to culture obsessives,” adding that “all four performances are quite strong.”

Now that Peacock has officially renewed the series, here’s everything we know about Girls5eva Season 2.

Although executive producer Tina Fey announced the Meredith Scardino-created series in January 2020, Peacock didn’t release all eight Girls5eva Season 1 episodes until May 6, 2021. Of course, the COVID-19 pandemic certainly contributed to the delay in production. Bareilles was revealed as one of the leads in August, and the rest of the main cast announcements went out in early October, so filming likely began around that time. Then, Peacock dropped the first teaser in February, and based on Philipps’ aforementioned Instagram Stories post, that’s about the time filming wrapped, too.

Judging from that timeline, the earliest a potential Girls5eva Season 2 could premiere would be in early 2022.

It’s unlikely the show would go on without the four present-day Girls5eva members: Bareilles’ Dawn, Goldsberry’s Wickie, Pell’s Gloria, and Philipps’ Summer. Although the first season revealed that the group’s fifth member, Ashley (Ashley Park), had died in a freak infinity pool accident years ago, she still appeared in flashbacks and could get the same treatment in future seasons. The door similarly remains open for the other Season 1 cast members, including Jeremiah Craft (Lil Stinker), Daniel Breaker (Scott), Jonathan Hadary (Larry), and Andrew Rannells (Kev).

Now that Girls5eva has been picked up for a second season, there are sure to be some new additions as well, so check back for updates as those details become available.

More like this
Emma Thompson, Lashana Lynch, & Stephen Graham Lead Netflix’s 'Matilda'
By Sophie McEvoy
Every Song In The Umbrella Academy Season 3
By Kadin Burnett
Jill Zarin Said Her 2011 RHONY Firing “Felt Like A Death”
By Brad Witter
Taylor Armstrong Would “Definitely” Return To RHOBH After Her Season 3 Exit
By Brad Witter
Get Even More From Bustle — Sign Up For The Newsletter