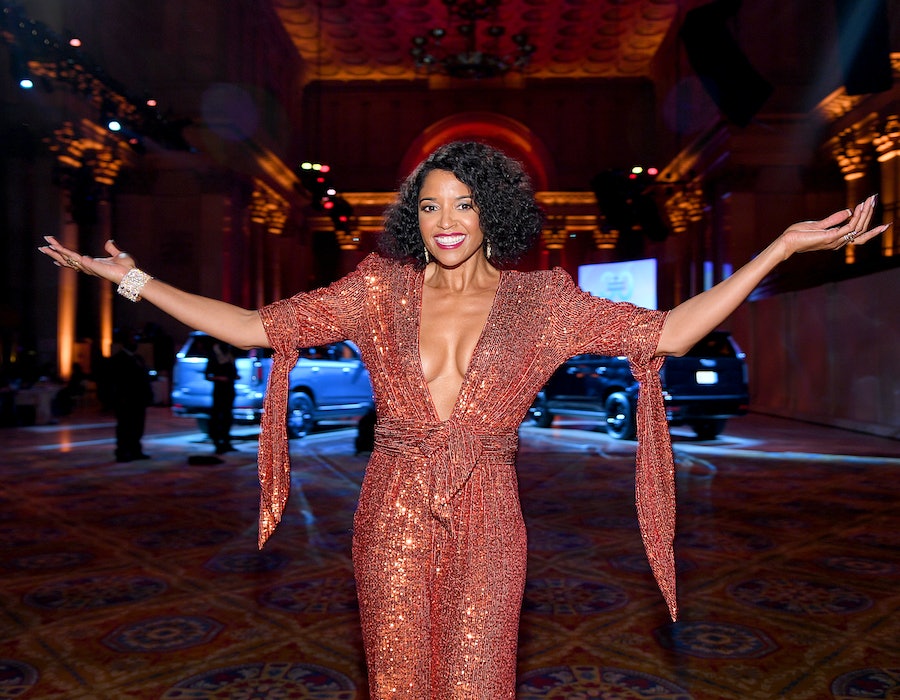 Upon first watch of Girls5eva, you’ll likely find very little parallels between try-hard singer Wickie and the effortlessly cool actor who plays her, but Renée Elise Goldsberry has surprising commonalities with her character. For starters, before Goldsberry soared to stardom as Angelica Schuyler in Hamilton on Broadway, she was nearly in a '90s girl group, just like Wickie.

“People always want a couple of Black girls to sing behind them at any time,” she tells Bustle over Zoom, detailing how she spent part of her life fighting being pushed to the background. Revealing that she’d been in a few different groups, Goldsberry admits one of her most promising crews never made it off the ground after one member’s clumsy comment about a record label exec appearing pregnant when they — uh oh — were not, made that path “poof!” Goldsberry recalled this near parallel with a laugh, joking, “Now somebody wants to put me in those clothes when my abs are not what they were naturally back then.”

Upsetting as it may be that the world never heard from a bonafide Goldsberry group, she now makes up one fifth — err, one fourth after that infinity pool incident involving Ashley Park’s character — of Girls5eva, the titular group of Peacock’s latest hit from Tina Fey and Meredith Scardino. Acting alongside Sara Bareilles, Busy Philipps, and Paula Pell, Goldsberry shines as Wickie, the self-absorbed, extremely talented lead singer who is partly inspired by legends Mariah, Whitney, and Celine. With their questionable and controversial lyrics, it’s no surprise Girls5eva lost their footing. When it comes to Wickie, she may not have much to show for her career, but she refuses to let go of her dream. In an effort to get the band back together after their first reunion performance in 20 years, Wickie takes up residence in her friend’s modest New York City apartment, and she and her translucent grand piano (her most prized possession) are a non-negotiable package deal.

While Wickie may be made up of a “multitude of sins,” as Goldsberry describes the character, it’s hard not to feel for her in her relentless pursuit of fame. “Your gift can turn into this kind of diseased body. It can disease your body if you don't have an outlet for it,” the Hamilton performer says, adding that not landing certain projects occasionally led to her rethinking her career and whether she’s “more worthy of a dream come true than that girl.” Candidly, she continued, “At some point, is this just a sad existence to keep putting things at the altar of something that’s not going to happen?”

But with an impressive filmography filled with roles ranging from Altered Carbon’s Quellcrist Falconer to her upcoming portrayal of Amelia in Marvel’s She-Hulk series on Disney+, things are certainly happening for Goldsberry now. Sitting an arm’s reach away from her guitar and a stand topped with a classical music book during this video interview, Goldsberry notes how she’s ready to step fully into the spotlight and how releasing a single followed by an album will help.

Though she’s a Broadway giant, don’t expect this next project to be filled with only standards, a reimagination of “My Funny Valentine,” or a slew of covers — the very thought of solely reprising other artists’ work makes her go, “Can I shoot myself in the head?” At heart, she’s a songwriter looking for a beat that moves her, and there’s nothing that’s more “frustrating” for her than knowing someone else already composed a song that lays out how she feels. “I could cry,” she says. “It’s been so painful.” Now, it’s her turn.

Save for a couple of covers that might be sprinkled into the final cut, Goldsberry is crafting her album her own way and will deal with the rest later. “I’m stealing from Wickie some of that just kind of obtuse ambition. I’m stealing it, and we’ll see how this goes.”

More like this
At 28, Tisha Campbell Was Newly Married & Dancing Through A Career Pivot
By Grace Wehniainen
Christina Perri Had No Idea Her 'Twilight' Song Is On YouTube's Top 100 Chart
By Radhika Menon
HSMTMTS Season 3 Will Give Olivia Rodrigo’s Nini A “Proper Sendoff”
By Brad Witter
How Lady Gaga & Adele Are Closer To The EGOT All Of A Sudden
By Jake Viswanath
Get Even More From Bustle — Sign Up For The Newsletter