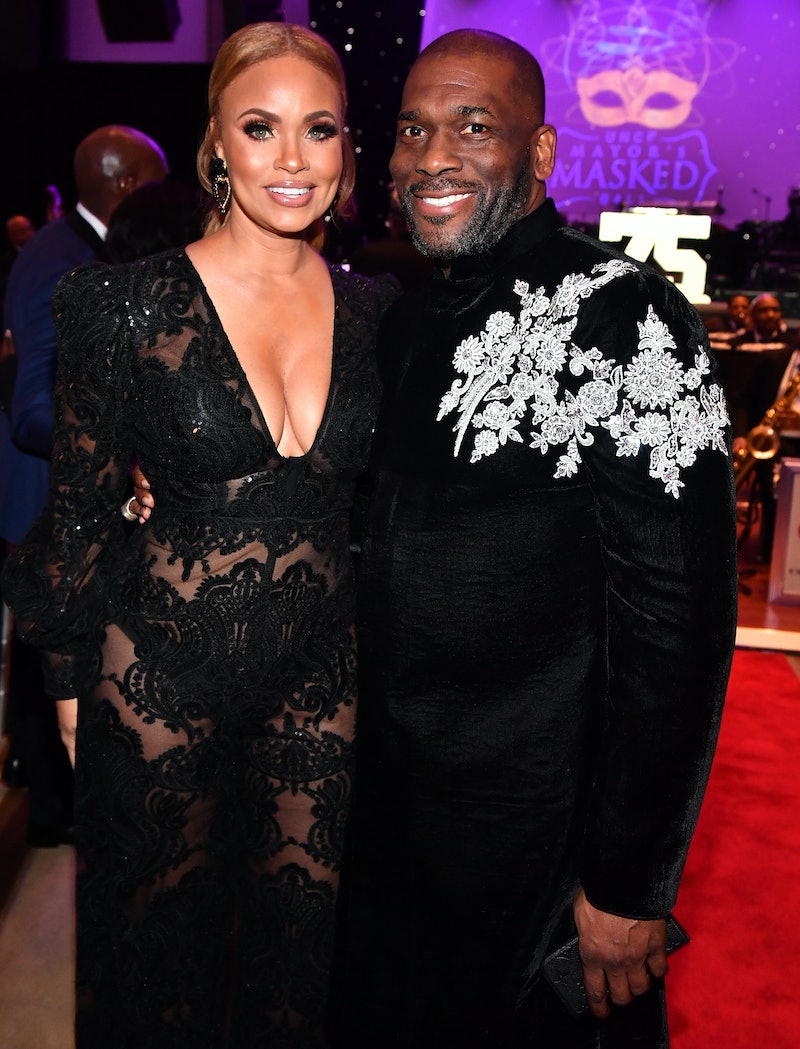 When Real Housewives of Potomac premiered back in 2016, cast member Gizelle Bryant had recently returned to the Maryland city following the end of her seven-year marriage to pastor Jamal Bryant, with whom she shares three daughters: Grace and twins Angel and Adore. But despite his infidelity that sparked the initial end of their relationship, Season 5 of RHOP saw the pair attempting to reconcile — even as former co-star Monique Samuels presented Gizelle with an alleged binder of receipts detailing his cheating during the reunion. Following the latest Season 6 episodes, many fans of the Housewives franchise are wondering whether or not Gizelle and Jamal Bryant are back together as of July 2021.

Back in August 2020, Gizelle told E! News that she and Jamal were “doing great” and even shared some hopeful details about their future. Asked if she would marry Jamal a second time, she said: “I mean, yes. I’m not opposed to it. If he asked me I would say yes, but you know the timing has got to be right. Clearly, I’m not getting married tomorrow.” However, she also said there’s “no rush,” adding, “Jamal’s not going anywhere. We’re just going to enjoy our time.”

But during an episode of Bravo’s Chat Room in December 2020, Gizelle dished on some changes in their relationship. Though she dismissed Samuels’ book of receipts, she claimed the coronavirus pandemic complicated her relationship with Jamal, who was living and preaching at New Birth Missionary Church in the then-COVID hotspot of Georgia. “I’m not reckless with how I handle COVID,” she said at the time. Appearing on The Breakfast Club in May 2021, Gizelle doubled down on her reasoning. “He lives in Atlanta [and] I live in Maryland,” she told host Angela Yee. “With the pandemic, we just realized it’s not the right time.” (She reiterated these sentiments during Season 6 Episode 2.) She also added that she’s single and fully prepared for her own Hot Girl Summer — as well as “spring, winter, and fall.”

Days after the interview, she shared more details about the relationship’s end on her podcast Reasonably Shady, per Insider. “I didn’t have a prenup,” Gizelle revealed. “It was a fight over money, and I will never, ever do that to myself again.” Furthermore, she said the marriage made her feel like she was living in Jamal’s “shadow” as he’s a “huge personality.” “I didn’t have my own sense of who I am and who I want to [be],” she said before offering advice to listeners. “Do not lose yourself in whatever relationship that you’re in,” she added. “If he’s not helping you get to your individual greatness, you need to leave.”

In an interview with E! News conducted in July, Gizelle further detailed the state of their relationship, once again claiming the pandemic caused its end. “I don’t think any long-distance relationship can really withstand not seeing each other,” she said. “But is he still in my life? Is he one of my best friends? Absolutely.” On the topic of her Hot Girl Summer, she also noted that her daughters are supportive of her dating prospects. “They will always take my lead,” she continued, “and they just want me to be happy, one way or another.”

During the Season 6 premiere of Real Housewives of Potomac on July 11, viewers got a deeper look into the demise of their rekindled relationship. Replying to Candiace Dillard Bassett’s question about the couple’s then-status, Gizelle said, “Life is like day to day right now. It’s not good. It’s just too much pandemic.” Candiace then asked her if she saw them breaking up, to which she replied: “I do feel like it would be nice if somebody lived eight minutes down the road, not eight states away. And [in] 2020, we only saw each other like once a month.”

Later in the episode, Candiace noted the potential difficulty of getting back into the dating game, and Gizelle noted that she “could just be by [herself] for a little while.” Clearly, a lot changed regarding her interest in dating between filming Season 6 and summer 2021, so tune into new episodes of the show Sundays on Bravo to find out how it all went down.