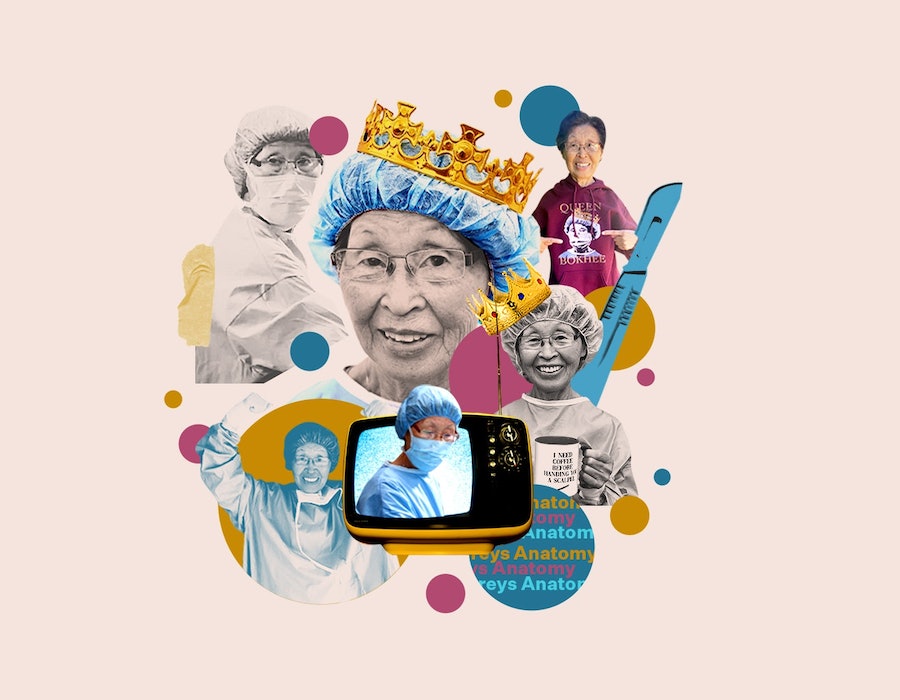 About four years ago, ahead of Grey’s Anatomy’s Season 15, the cast gathered for a routine table read in Los Angeles. In attendance was BokHee An, a real-life scrub nurse who’d appeared in more than 200 episodes of the ABC show since its 2005 premiere. Her character, also named BokHee, assisted fictional surgeons in fictional operating rooms — but had only spoken once before. On that day, her name appeared in the script, talking to Dr. Meredith Grey (Ellen Pompeo). After a historic surgery, she calls Meredith “Wonder Woman.”

When An spoke that line at the table read, her castmates erupted in applause. When the episode aired in February 2019, her legions of fans would do the same.

“At the table read, I was so nervous,” An, who’s 83, tells Bustle. “English, of course, isn't my first language, so I am always worried people won't understand me, or I will say a sentence wrong. When everyone clapped, it made me feel so happy and part of a family.”

Her earnestness has made her something of a star on Instagram, where she has 629,000 followers, who clock her every on-screen move, as well as multiple fan accounts. She’s also earned a moniker of her own: Queen BokHee.

BokHee An was born in 1939 in a small town in Chungnam, South Korea. At age 17, she broke custom by moving north to Seoul to obtain an education, and worked to pay for a dorm room where she lived. At 20, the age by which she was expected to marry, she had no interest in nuptials and considered instead becoming a nun. (A priest said she had “too soft of a heart” for the job, she remembers.) An’s godmother introduced her to an OB-GYN in Seoul, for whom she assisted in delivering babies. She had no official training, but impressed the doctor with her “great manual dexterity,” and he, in turn, helped her get a job sterilizing and packaging surgical equipment.

Back in Chungnam, her parents — a homemaker and businessman — were still pressuring their eldest daughter to marry. Instead, in cinematic fashion, she followed a friend to California in 1968 and changed her legal name to Kathy. (She still goes by BokHee in most settings.)

Outside of Sacramento, she babysat for a plastic surgeon by day, and worked shifts on a hospital’s surgical floor by night because she didn’t speak much English. Three years later, around age 32, she moved to Santa Barbara to take a position as a cardiovascular scrub tech.

“What’s extraordinary about BokHee is not only her commitment to 18 seasons of Grey’s Anatomy and counting, but also to her first profession that got her the gig on Grey’s,” Pompeo says via email. “BokHee is responsible for helping the surgeons at St. John’s [hospital here in LA] save the lives of hundreds of people.”

She credits her TV career to Linda Klein, who she met five years later. Klein, a registered nurse who would become Grey’s medical advisor, recruited An to help make TV shows look as medically accurate as possible, down to the placement of surgical tools. (On Grey’s, Klein cameos as Nurse Linda.) “I was never nervous and really was trying to help Linda wherever I could,” An says. “I didn't see it being that different since all I was doing was replicating what I did in the operating room.”

BokHee An’s first TV appearance came in 1983, in ABC’s short-lived medical drama, Ryan’s Four. Since then, she’s appeared in more than 600 episodes and movies, including Family Ties, Doogie Howser, M.D., Chicago Hope, Nip/Tuck, and Vanilla Sky. She considers work her first love, although she did marry in 1967 at age 28. (The couple separated in the ’80s after years of infertility issues.) In 2015, she retired at age 76. She’d been a scrub nurse for 56 years.

Today, An lives with her younger brother and his family in Tarzana, California (he appears as her on-screen husband in Season 15), sells Queen BokHee merch online, and continues to work on Grey’s. Below, she opens up about cast departures, her relationship with Sandra Oh, and social media fandom.

“Patrick Dempsey, Sandra Oh, and Justin Chambers were the hardest to see leave.”

You said you “broke custom” when you moved to Seoul to obtain an education. How did you ultimately decide that was the right choice?

My grandparents were very wealthy. Coming from that legacy, I had a lot of pressure to be the stereotypical Korean woman. I felt sometimes like I was in a cage or jail. It was very difficult for me to move to Seoul. I remember crying when I made the decision, but knew that I had to leave in order to learn [a skillset] and be independent.

It’s rare for a background actor to make such an impact on a fan base. How did your character move into the spotlight?

I never looked to make an impact. It was natural. I had been there from the beginning, [so] people started to figure out who I was. Now people recognize me when I am grocery shopping. It’s funny. I hear from fans [who] play games to point out every time they see me on screen. The fans started to call me Queen BokHee, which started as a joke on set. My friend and producer on the show, Dr. Michael Metzner, told me that people would love to see me on Instagram, so he helped me with my social media.

Tell me about your “boyfriends” on set.

The boyfriend labels started as a joke. I often call people by nicknames, [such as] Boyfriend #1, Boyfriend #2, and so on. The labels caught on, and now the running joke is that everyone is my boyfriend. I love to make people laugh. It is always nice working with the handsome actors. They are not just pretty to look at, but also amazing people.

While fans love your facial expressions, do you wish your character got to speak more?

I never really think about it. I am always open to speaking more, but I do love the mystery behind the character. I don't plan my expressions, but just play in the moment of the scene. I am told I am very expressive on and off screen.

You’ve been on Grey’s from the beginning, and there have been so many cast departures. Which affected you most, and who would you most like to see come back?

Patrick Dempsey, Sandra Oh, and Justin Chambers were the hardest to see leave. I loved Patrick so much, and he was a lot of fun to work with. He was always so nice to me. Justin always made me laugh. I would love to see them all come back.

Back when Sandra Oh was on the show, she described you as a second mom. Do you stay in touch?

We haven't spoken since she left Grey's Anatomy, but we had a special connection, having our Korean heritage. I always loved working with her. I love to see the success that she has had in her career and think of her often.

You have such a loyal fan base. When did you realize you had such a huge following?

I laugh every time someone brings up the fact that over 600,000 people follow me on Instagram. I love making pictures and videos, and have had many people tell me I have helped or motivated them to go into the medical field. I love reading messages from social media, as it really is amazing to see the impact I can have on people's lives.

Even though you retired as a scrub tech, you’ve remained on Grey’s. Why is that, and how long do you see yourself remaining on the show?

I'm old. I'm 83! I love working on the show, but for me, it isn't work. I get to continue seeing my work family on Grey's, and hope to stay on the show for many years. At my age, you hope to have accomplished most everything you want in your life. I want to continue my missionary work in Africa — I have been doing medical missionary work for decades. I go with general surgeons and help do free surgeries for people. This is something very close to my heart. As long as my health allows, I will continue doing that.

Is there anything else you’d like fans to know about you?

I love playing the Korean instrument called the gayageum and have posted pictures of me playing on my Instagram. I also love to go out with friends for Korean BBQ, and most people know I have the biggest sweet tooth you have ever seen. I eat so much even though I am so little — much more than huge men.

More like this
'Derry Girls' Creator Teases Exciting Spin-Off Starring These Three Characters
By Olivia-Anne Cleary
At 28, Minnie Driver’s Personal Life Was “Falling Apart”
By Kate Dwyer
Becky G Once Had A Fear Of Speaking Spanish. Now She's Topping The Latin Charts.
By Tess Garcia
Pete Davidson & Kate McKinnon Are Part Of A Reported Major SNL Cast Shakeup
By Brad Witter
Get Even More From Bustle — Sign Up For The Newsletter