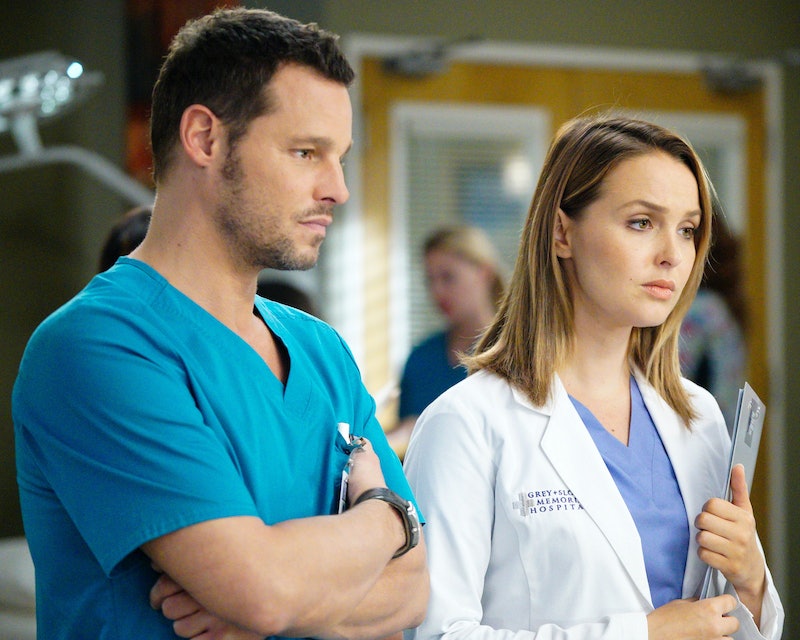 Grey’s Anatomy Season 16 was rough on fans of the show. After spending 15 years playing Alex Karev, Justin Chambers unexpectedly left the series without even a proper goodbye episode. Instead, Karev revealed in a breakup letter to his wife, Jo Wilson, that he’d rekindled his romance with Izzie Stevens in Kansas after learning they shared a set of 5-year-old twins. Jo never got closure, and neither did viewers. But Grey’s Anatomy star Camilla Luddington thinks that at this point it’s for the best.

“I know that fans would really like the idea of Alex showing up and there being like this conflict or something between him and Jo, but ... what can you say after sending a letter like that?” Luddington tells Bustle of her character. “In my mind, there’s no way to make that better. It was such a brutal way to leave the relationship. ... I would rather Jo just be able to continue to grow in her happiness and move forward because she really is moving forward.”

Indeed, Season 17 saw Jo finally begin advocating for herself and “deciding what, other than this past relationship that she was devastated over, she can seek out in her own life that will bring her joy,” Luddington says. At the end of the season, Jo moved out of the apartment she and Karev once shared and at last closed the door on their failed marriage. Now, she’s raising her adopted 1-year-old baby, Luna, working in a new surgical specialty that she’s passionate about, and living in Jackson Avery’s swanky apartment.

Still, Luddington isn’t opposed to a little bit of drama: She says she’d love to see Katherine Heigl return to the show as Izzie after leaving in 2010. “Do I think that it would be juicy drama for Izzie to show up at some point? Yes, 100%,” she says. “I hope that it wouldn’t take Jo back in the same way it would if Alex showed up. But who knows? This is Grey’s Anatomy ... you never know where the story is going to go.” (Heigl, for her part, said earlier this year she’d “never say never” to a possible Izzie comeback.)

Jo has already had to face one of Alex’s former lovers in Season 18: Kate Walsh’s Addison Montgomery, who slept with Alex in Season 3. However, Luddington says Jo probably isn’t aware of the hookup nor would she really care. “I just assume Alex has slept with everybody,” she jokes. “If you told me they hadn’t slept together, that would be more shocking. Those early seasons, he was with a lot of women.”