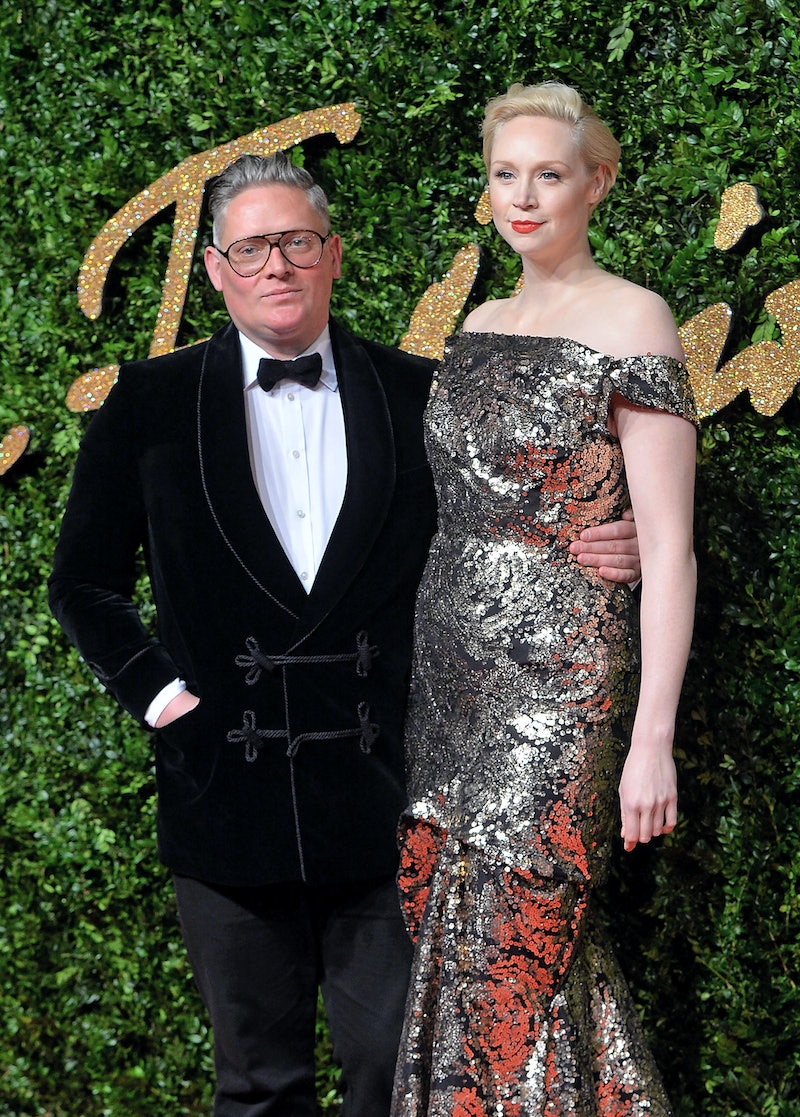 She cemented her status in TV history when portraying Brienne of Tarth on Game of Thrones. Now, Gwendoline Christie has returned to the fantasy realm in Netflix’s The Sandman as the fallen angel Lucifer. Not only that, but the star is busy filming Tim Burton’s Addam’s Family series Wednesday, where she’ll portray Larissa Weems. But when the actor eventually finds the time to relax, who does she spend it with?

Christie has been dating designer Giles Deacon since 2013, and according to an interview he did with Grazia UK, it was love at first sight. "I met Gwendoline... through a mutual friend and was instantly smitten," Deacon told the outlet. "For a million different reasons, I thought she was extraordinary. The way she carries herself, it was not like anything I'd seen before."

Deacon has met and dressed countless big-name celebrities — like Cate Blanchett, Solange Knowles, and Sarah Jessica Parker, to name just a few. Of all the major fashion moments he's had a hand in creating, though, one of the most prolific events involved the royal family, so to speak.

In 2017, Deacon created a lace wedding gown for Pippa Middleton when she tied the knot with hedge fund manager James Matthews. With the dress, she wore a bespoke tulle veil dotted with pearls made by milliner Stephen Jones, as reported by The Telegraph. Pippa’s wedding was, of course, attended by her sister Kate Middleton, Prince William, and Prince Harry, making it a royal family affair.

While creating Middleton's gown likely earned Deacon a whole slew of new fans and loyal followers, Christie praised his designing talent well before then. "Giles has long been one of my favourite designers," the star told The Telegraph in August 2016. "[His designs] can be practical, otherworldly, sculptural and mind-bending, but you always feel celebrated as a woman when you wear them … Their confidence somehow increases yours."

Meanwhile, Deacon told The Telegraph that Christie was the primary inspiration for his first couture collection. "It’s a pleasure to work with your partner," the creative explained. "She’s a fantastic muse. She’s a character herself, and her trail of various characters is brilliant," he continued. "She’s pretty transformative, which is always an interesting thing from a designer’s point of view."

Christie regularly wears Deacon's pieces on Hollywood red carpets, and she's seems especially fond of having him dress her for the Emmys. Take, for example, the buttery yellow gown that Deacon created for the actor in 2018, which earned her a spot on several media outlet's best dressed lists for the event.