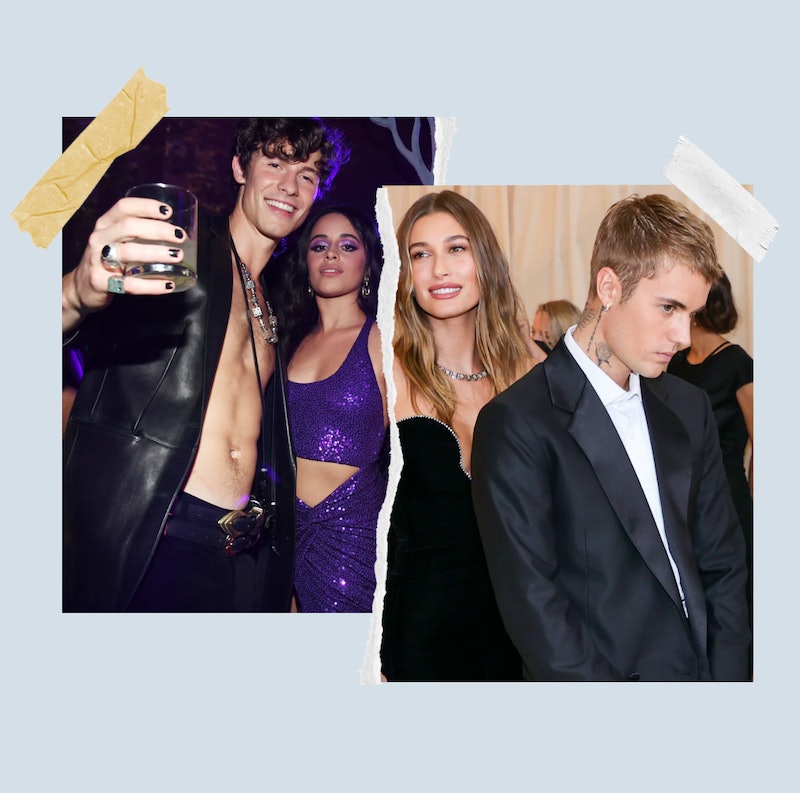 The Met Gala is the perfect place for celebrities to run into one another, say a quick hello, and take snaps that eventually go viral online — though sometimes these run-ins between stars can be odd, especially when one-time lovers come face to face at the annual charity event. Exes Hailey Bieber and Shawn Mendes, along with their new significant others Justin Bieber and Camila Cabello, had to navigate their way through one such encounter, one which fans have been watching non-stop.

Mendes and Cabello, who started dating two years ago, bumped into the Biebers on Sept. 13 before the event even started as they were preparing for their moment in front of the cameras. Their entire interaction was caught on video (watch below at the 7:23 mark) for Vogue, which sends crews to follow celebs as they get dressed for the biggest fashion event of the year.

Just after getting off the elevator in full glam, Cabello spots the Biebers and rushes over to break the ice. “Hi, how are you? Good to see you,” the “Havana” chart-topper said with a full smile before hugging the model and social media star. Then, Cabello turns her attention to Hailey’s husband Justin. Cabello hugs him as well, immediately praising him on his recent MTV Video Music Awards performances of “Stay” with The Kid Laroi and “Ghost” from the prior night.

After Cabello said her hellos, things got a little strange, according to some fans. Mendes then takes his turn welcoming both Biebers, which might have felt a little weird for all involved because Mendes and Baldwin (now Bieber) dated each other years ago and even attended the 2018 Met Gala as a couple. Apparently, just days after they posed for pictures at the event three years ago, they were no longer an item, and Baldwin was back with her ex Bieber not too long afterward.

Mendes and the male Bieber, who notably collaborated on the 2020 song “Monster,” exchanged a few sentences, but all seemed friendly, or at least innocuous between the two. “Hey, bro,” Mendes said as he hugged him. Bieber admired Mendes’ sartorial choices, saying, “You look good. Going with the no shirt vibes. I like it,” and the other hitmaker replied that he is “trying to push it a little bit.” After a few seconds of chit-chat, the female Bieber shut things down by telling her husband, “I think they’re ready,” before turning to Mendes and Cabello to say, “We’ll see you guys there.” The “Peaches” singer kept things cordial, ending it all with a simple, “Love you so much.”

The interaction among the four stars lasted about 30 seconds, but that was plenty of time for fans, or perhaps those who don’t like any of them, to find meaning where there may have been none. Whenever someone is as famous as the Biebers, Mendes, and Cabello, the public is bound to dig into everything they say and do, and while this conversation might have been slightly awkward for those involved, they were all pleasant, and it doesn’t appear as though there’s any animosity.

Frazer Harrison/Getty Images
Shawn Mendes and Hailey Baldwin at the 2018 Met Gala.Dia Dipasupil/WireImage/Getty Images
More like this
Taylor Swift May Miss The 2023 Grammys For Reasons Fans Know “All Too Well”
By Jake Viswanath
Will Beyoncé Perform At Or Attend The 2023 Grammys?
By Jake Viswanath
Taylor Lautner Thought Taylor Swift's 2009 VMAs Interruption Was A "Skit"
By Alyssa Lapid
Cardi B, Olivia Rodrigo & More Will Present At The 2023 Grammys
By Jake Viswanath
Get Even More From Bustle — Sign Up For The Newsletter
From hair trends to relationship advice, our daily newsletter has everything you need to sound like a person who’s on TikTok, even if you aren’t.