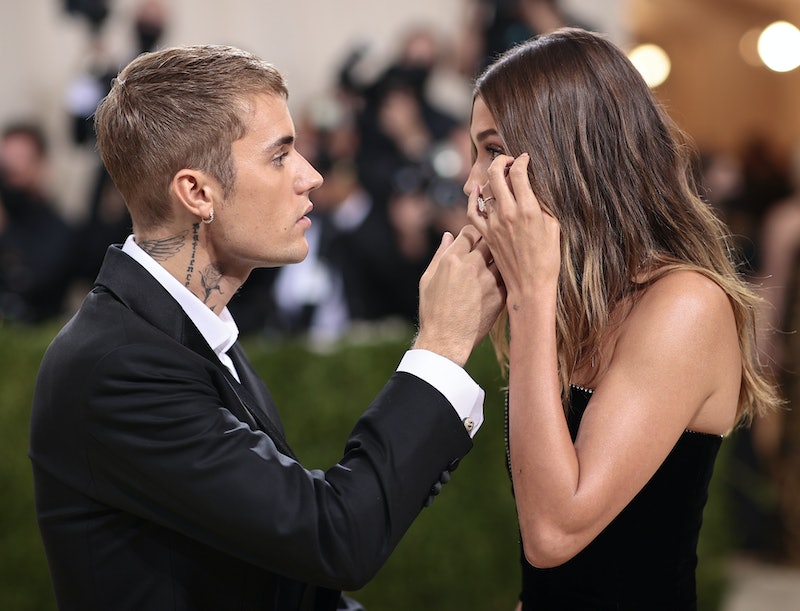 A viral TikTok video appears to explain the reason for Hailey Bieber abruptly putting on sunglasses on the Met Gala red carpet. In the short clip, which has amassed more than 1.5 million views in just 18 hours after being posted, a crowd can be heard repeatedly yelling “Selena, Selena, Selena” as the 24-year-old model and her husband Justin Bieber pose for photographers at the Sept. 13 event. The chant, in reference to Justin’s famous ex-girlfriend Selena Gomez, allegedly caused Hailey to tear up and ask her team for sunglasses to cover her eyes.

Amid the commotion, Justin looks as though he’s mouthing “don’t cry, don’t cry” in an apparent attempt to console his wife. His loving behavior in the TikTok video matches some of the professional photos of the couple uploaded to sites like Getty Images (like the photo above).

The Met Gala coincided with the Biebers’ third anniversary of their courthouse wedding, which would make the “Selena” chant all the more emotionally cutting if true. Another video, taken from a different angle of the couple, features the same chant and more commentary from Gomez’s fans.

Billie Eilish’s heartbreaking song “Happier Than Ever” soundtracks the viral video posted by TikTok user @returnofbizzle, adding another layer of emotions to clip.

In another TikTok video showcasing the same moment, Hailey’s cousin and fellow model Ireland Baldwin defended the Biebers in the comments section. “They’re one of the happiest and most in love couples I’ve ever gotten the chance to be around,” wrote Ireland, who is the daughter to actors Alec Baldwin and Kim Basinger. “They don’t care about them 😂.” Her comment has garnered more than 20,000 likes as of Sept. 15.

Hailey, who wore a Saint Laurent black strapless sheath gown with a plunging embellished neckline alongside a suited Bieber, was seen smiling at him as they arrived for the annual charity event before appearing to be visibly shaken after the apparent chanting.

READ NEXT: What Is Justin & Hailey Bieber’s Net Worth

Hailey then proceeded to put on the sunglasses.

And the couple continued to pose for photographs.

The Biebers were in good spirts when Keke Palmer interviewed them for Vogue though.