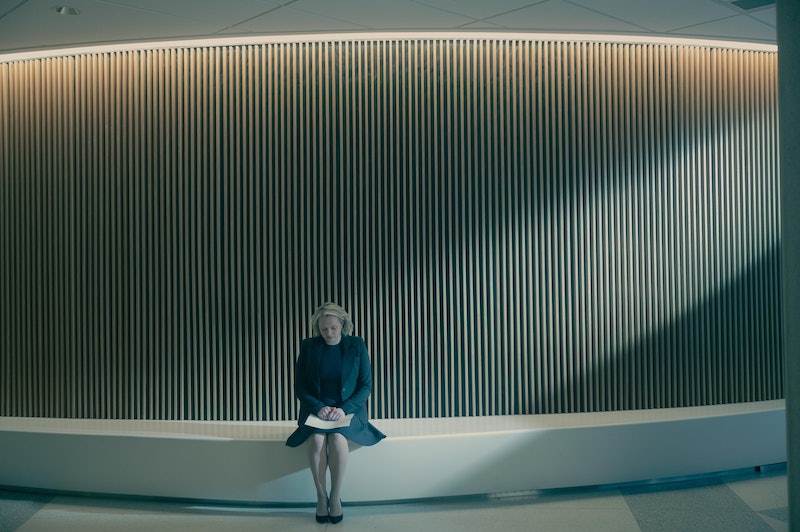 Spoilers ahead for The Handmaid’s Tale Season 4, Episode 8. June Osborne is not interested in inner peace. She doesn’t want to journal, and she doesn’t want to forgive. On the June 2 episode of The Handmaid’s Tale, she sits in a circle of Gilead survivors as they imagine how she must feel on the eve of facing Fred and Serena in court. “I’m not nervous or worried or scared,” she says when it’s her turn to talk. “I can’t f*cking wait.”

Much like June didn’t reach Chicago to lay low, she didn’t come to Canada to leave the past behind. She looks around the public library at the women who share her history, but she doesn’t see much of herself. “Why aren’t they more angry?” she asks. The question becomes her mission. This week’s episode is about moving on, but June is bringing her own brand of vengeance into the healing circle.

What should happen in the aftermath of injustice is an interesting and open question. Moira’s support group is a version of talk therapy. The women meet a couple times a week for an hour and discuss what happened to them; the objective is to heal. Personally, June prefers privacy. She’s secretive with Luke about the seven years they’ve spent apart. She doesn’t talk about the Waterfords or what’s happened with Hannah. She doesn’t even want him to attend the hearing.

Publicly, though, June’s thirst for justice borders on revenge. In the last episode, she wished Serena would have a miscarriage for the pain she caused. This week, she takes the stand to recount the years of rapes and beatings she won’t discuss with her husband. Healing is a secondary concern, and it certainly doesn’t come from private confessions. It comes from seeing bad people face consequences. She wants individual retribution for every Handmaid whose life Gilead has destroyed, but finds herself settling for collective justice. “Mine is just one voice. Countless others will remain unheard, imprisoned by men like Fred Waterford,” she reminds the court. “Women — my friends — who lost their lives and can never be heard.” When it’s time, she asks for the maximum possible sentence for Fred and Serena. Moving on is what happens when suffering of the innocent is matched by the suffering of the guilty.

Emily is June’s first test case. As one support group session wraps up, they’re visited by Aunt Irene, who we learn was responsible for Emily’s lover’s execution and Emily’s genital mutilation in Gilead. “You should face her,” June challenges. Without warning, she brings Aunt Irene to the next meeting, eager to recreate the pageantry of justice she experienced in court for Emily’s benefit. “I want you to forgive me,” the kneeling Aunt begs of Emily. It may not be an international tribunal, but at least its participatory justice — Emily has the power to walk away from Irene, to deny her something that she wants. “There’s nothing you can do,” Emily tells her. Later, when Luke asks June how her evening went, she almost smiles.

Moira tries to repair the group, but it’s clear that their mission has been hijacked. When she tells Emily it was “sh*tty” of June to ambush her, for example, Emily’s objection is that she didn’t get enough revenge on Aunt Irene. Totally fair. When Emily drives out to the woman’s home to get more, she finds Irene has hung herself. Readopting the language of self-help, the group attempts to process how “traumatic” it is. They call Irene a “coward” and assure Emily that she shouldn’t feel bad. “I feel amazing,” Emily says. “I’m glad she’s dead, and I hope I had something to do with it.” As perhaps June predicted, the other women begin vocalizing their revenge fantasies, which are graphic and disturbing and — considering the hell they lived through in Gilead — likely still not enough.

For Moira, anger is a tool and the goal is to heal; one form of justice is the emotional relief a victim feels as measured by their capacity to move on. For June, revenge is the objective and anger is the means to stay motivated. Justice is punishment. Only when she starts to see the people around her pay for their crimes — Irene hanging from a tree, Fred’s descent from Commander to criminal defendant — does she even begin to allow for private healing, like finally telling Luke the truth about Hannah.

It’s a dangerous gamble. Most of these women will never face their aggressors. Even for June, whose case against the Waterfords is front page news, juries can be unreliable. As the cross-examination June endures make clear, even when the facts are in your favor, criminal trials can be a bloodsport. Moira may not have been promising these women payback, but she’s at least promising them something she can provide.