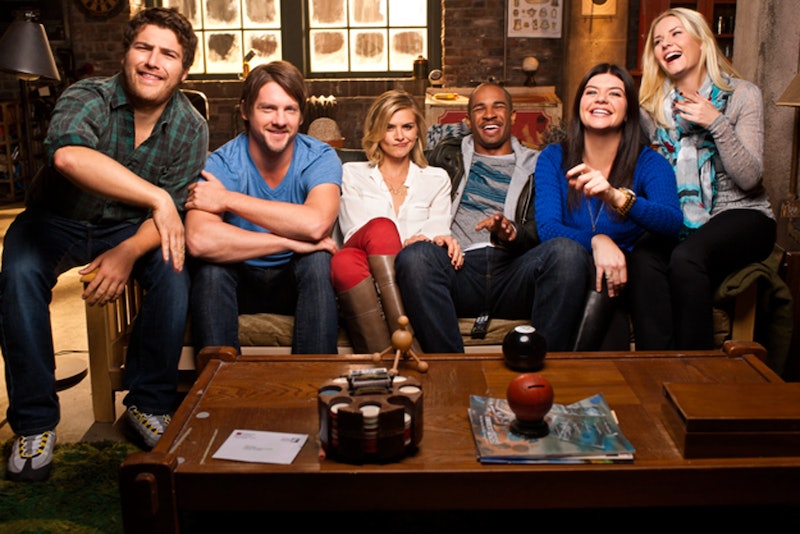 Get ready for the most ah-MAH-zing news since Rom-Com Con: the long-awaited Happy Endings reunion is finally happening. According to Variety, the cast of Happy Endings will reunite for a new episode on July 20, with all six of the beloved sitcom's original stars — Eliza Coupe, Elisha Cuthbert, Zachary Knighton, Adam Pally, Damon Wayans, Jr. and Casey Wilson — onboard to reprise their iconic roles and perform brand new material inspired by the ongoing coronavirus pandemic. The reunion episode — which will premiere on Sony Television Pictures' YouTube Channel at 4 p.m. PT — will also raise money and awareness for Color of Change and World Central Kitchen, as the organizations work to fight systemic racism and provide relief for those affected by COVID-19, respectively.

While very little information about the plot of the upcoming reunion episode, titled "And the Pandemmy Goes To..." has been revealed thus far, Variety did report that it will feature a "surprise special guest" star in addition to the original cast. (Can you say drama?) In addition, the outlet also featured a screenshot of the six stars during a Zoom reunion. Based on Alex (Cuthbert)'s home disco and Jane (Coupe) in full Hazmat gear, the episode promises to give fans a look into how the gang is handling quarantine. And after the episode, the cast will participate in a live Q&A session with fans.

"For years, the people — and multiple networks — have spoken: They do not want this show to continue. Undeterred, we were finally able to convince them to at least let us do just one weird Zoom thing, as long as we did it ourselves and it was for charity," the show's creator, David Caspe, said in a statement to Variety. "So if you want to watch, please donate to Color of Change and World Central Kitchen, two incredible organizations fighting to make the world a safer, more equitable, just place for all."

The reunion on July 20 will mark the second time that the Happy Endings cast has reunited to perform new material since the show's cancellation. In 2016, the show's writers created a "lost episode" that the cast performed as part of Entertainment Weekly's PopFest that year. The series — which premiered on ABC in 2011 — followed the misadventures of six friends in Chicago after one of them leaves the other at the altar on their wedding day. Despite running for just three seasons, the show gained a passionate fan base, who, like the stars themselves, have been clamoring for some kind of reunion or reboot since the sitcom was first canceled.

However, the most concrete news of a reunion came in August 2019, when ABC Entertainment President Karey Burke told The Hollywood Reporter that she was considering bringing the show back to the small screen. "I'm hearing that there's a remote possibility of something," she said at the time. "It's at the very beginning [stages]." Around the same time, star Zachary Knighton told Entertainment Tonight that the entire cast would be on board for a reunion in whatever form it might take. "I know everybody who was on Happy Endings wants to go back and do something, so we'll see," the actor, who played Dave, explained.

"Everybody's on shows right now and everybody's kind of contractually obligated to other places, other networks, but we'd love to do the show," he continued. Though he noted that a reunion was "news to me," Knighton added that the entire cast "love doing [Happy Endings]. And I think it's found a new audience since we got canceled, so I think people would like to see some more... So, we'll see."

In April 2020, Casey Wilson — who is married to Caspe and played fan favorite Penny Hartz on the show — first broke the news about the upcoming virtual episode during a conversation with Entertainment Tonight. "It's going to be fun. Really fun," Wilson teased at the time. "I'm excited. We were going to do it sooner, but we just couldn't get it all together, and now we're really excited. I love that show so much." Now, let the (Fiscal) Year of Penny officially begin!

More like this
The First Trailer For 'That '90s Show' Includes So Many Nods To The Original Series
By Jack Irvin, Alyssa Lapid and Grace Wehniainen
Kate Winslet To Star In Russell T Davies' 'Dark Season' Revival
By Sam Ramsden
'Bel-Air' Season 2 Finally Has A Release Date & A New Trailer
By Brad Witter, Kadin Burnett and Sam Ramsden
The 'Ugly Betty' Cast Just Reunited In The Best Way
By Sam Ramsden
Get Even More From Bustle — Sign Up For The Newsletter