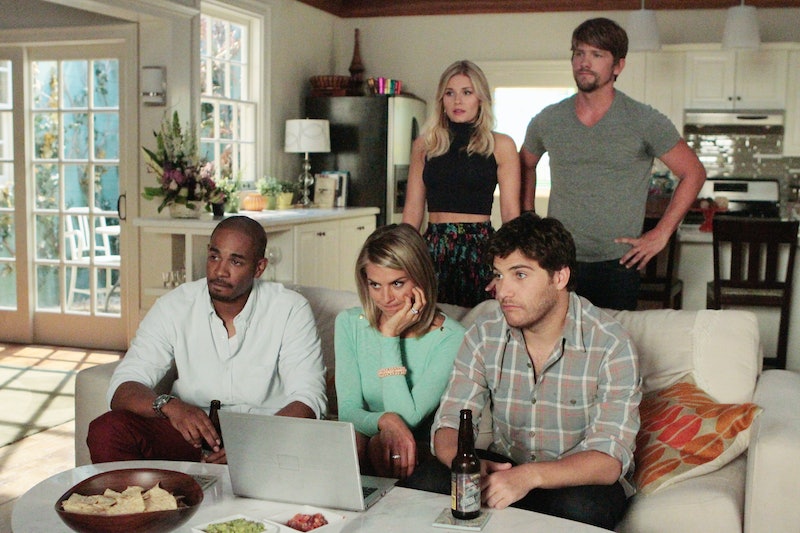 2020 may just end up being the Year of Penny — and Brad, Jane, Max, Alex and Dave — after all. In a recent interview with Entertainment Tonight, Casey Wilson revealed the Happy Endings cast is reuniting for a virtual table read in the coming weeks. While the actor — who is married to the show's creator, David Caspe — didn't have many details about when, exactly, the digital reunion will occur, Wilson did note that all of the show's original stars are on board.

"It's going to be fun. Really fun," Wilson said, though she declined to reveal whether they would be reading an old episode of the cult favorite sitcom or if Caspe would be writing new material. "I'm excited. We were going to do it sooner, but we just couldn't get it all together, and now we're really excited," she added. "I love that show so much."

Happy Endings, which followed the hilarious misadventures of six best friends in Chicago in the aftermath of a called-off wedding, premiered on ABC in 2011. Though it only lasted three seasons, the show earned a passionate fan base, thanks to its fast-paced punchlines and ridiculous pop culture references. Over the years, the cast has teased the possibility of a Happy Endings revival, especially after ABC Entertainment President Karey Burke told The Hollywood Reporter in August that the network was considering bringing the show back to television. "I'm hearing that there's a remote possibility of something," she said at the time. "It's at the very beginning [stages]."

If ABC does decide to make more episodes of Happy Endings, at least fans know for sure that the cast is definitely on board: "I know everybody who was on Happy Endings wants to go back and do something, so we'll see," Zachary Knighton (who played Dave) told ET around the same time. "Everybody's on shows right now and everybody's kind of contractually obligated to other places, other networks, but we'd love to do the show."

While Knighton admitted that rumors of a Happy Endings revival were "news to me," he seemed to think that the time right for the gang to get into some more shenanigans. "We love doing the show," he continued. "And I think it's found a new audience since we got canceled, so I think people would like to see some more... So, we'll see."

Of course, a rebooted sitcom isn't the only possibility for the beloved cast to reunite, as Damon Wayans Jr., the actor behind Brad, told E! News way back in 2013 that he hoped to make a Happy Endings movie one day. "I would love to do anything with that!" he told the outlet, before adding that the cast were always looking for an opportunity to get back together, regardless of the format. "We'll even just come to your living room and act it out."

The digital table read will actually be the second time the Happy Endings cast has gotten together to read a new script for fans; in 2016, the show's writers got together to write a "lost episode" that the cast performed as part of Entertainment Weekly's PopFest that year. (The group are also following in the footsteps of the Nanny cast, who recently hosted a "pandemic table read" of the pilot episode.) Still, regardless of whether they read a new episode or one of the show's beloved classics, seeing the Happy Endings cast back together — even virtually — is bound to be "ah-MAH-zing."