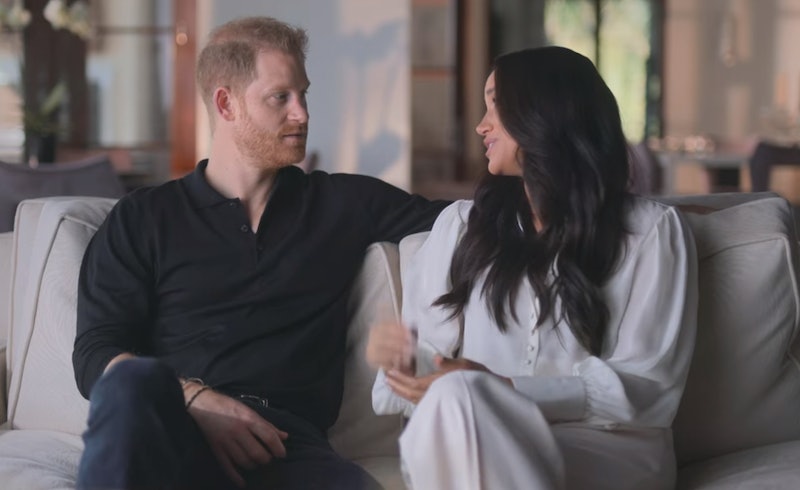 The first volume of Netflix's long-awaited Harry & Meghan docuseries has debuted, with Prince Harry and Meghan Markle giving their side of the story of why they left the UK. Of the three episodes released so far, the Duke and Duchess of Sussex shared never-before-seen photographs and footage of their private life, including moments with their children Archie and Lilibet.

While the focus is very much on documenting their lives after stepping down as senior royals, Harry & Meghan also tells their story from the very beginning by analysing both of their childhoods, the moment they first met, and their relationship in the royal spotlight. The narrative is told through interviews and conversations with close family and friends, including a landmark chat with Meghan's mum Doria Ragland. There was also a surprise appearance from Serena Williams in the third episode, who describes Meghan and Harry's relationship as being "so tight" and that they "rely on each other so much."

Harry & Meghan features very personal moments for the Duke and Duchess of Sussex, particularly when referring to Harry's upbringing. The first episode provided insight into how the couple is reminding their children of Harry's mother, with a video of Meghan holding Archie up to a photo of his grandmother, Princess Diana, that hangs in his nursery.

Episodes 2 and 3 of the Netflix series focused more so on Meghan's upbringing, and how she integrated into the royal family, as well as the media's reaction and influence on the public's perception of her. Judging by Twitter's response to Volume I of Harry & Meghan, the royal couple is getting a lot of support. As viewers eagerly await Volume II on Dec. 15, below are some of the best online reactions to the first three episodes.

More like this
Laura Anderson Pulled The Ultimate Girl Power After Her Break-Up
By El Hunt and Megan C. Hills
Twitter Can’t Make Up Its Mind About Ekin-Su’s 'Dancing On Ice' Skate-Off
By Sophie McEvoy
Twitter Is Saying The Same Thing About Ekin-Su’s 'Dancing On Ice' Debut
By Sophie McEvoy
Twitter Can’t Get Over Stormzy’s Surprise Cameo On Winter 'Love Island'
By Sophie McEvoy
Get The Very Best Of Bustle/UK
Sign up for Bustle UK's twice-weekly newsletter, featuring the latest must-watch TV, moving personal stories, and expert advice on the hottest viral buys.